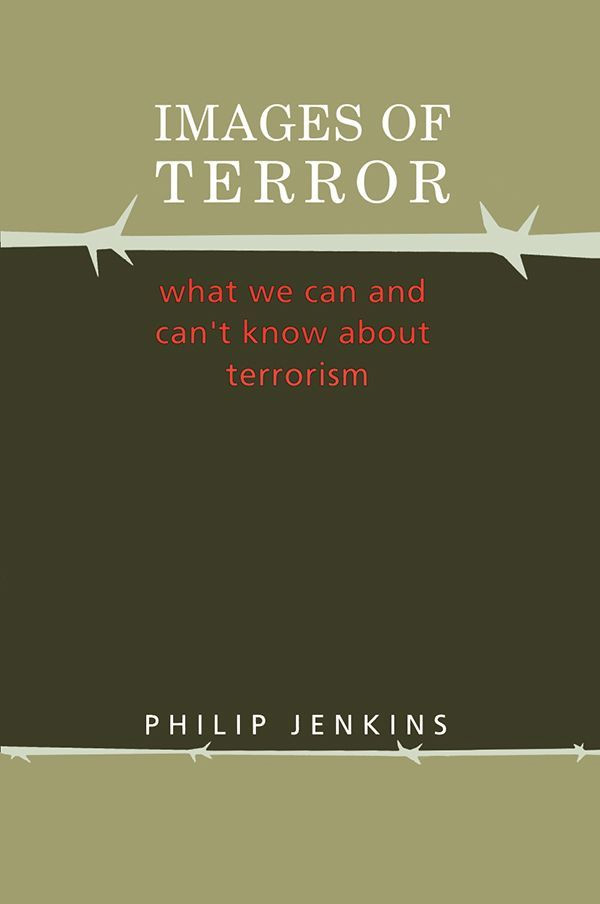 Images of Terror
What We Can and Can’t Know about Terrorism
Philip Jenkins
Kindle Hardcover Paperback
This book review appeared in the Fall 2004 issue of The Independent Review.

Philip Jenkins, the Distinguished Professor of History and Religious Studies at Pennsylvania State University, is perhaps best known for his recent books The Next Christendom: The Coming of Global Christianity (New York: Oxford University Press, 2002) and The New Anti-Catholicism: The Last Acceptable Prejudice (New York: Oxford University Press, 2003), each of which presents, in terms accessible to the layman, scholarly arguments about the changing social status of Christianity. The former book highlights the emergence of developing countries, particularly in Africa, as the future demographic and cultural center of global Christianity. The latter work examines the propensity of media outlets, otherwise careful to offend no minority, to cast the Catholic Church and its teachings in the worst terms possible.

Jenkins brings to Images of Terror the same talent for rendering academic material comprehensible to the popular reader that made his better-known books so appealing, although this monograph is intended for a somewhat narrower audience. Jenkins also brings to this work more familiarity with terrorism as a field of study than might be expected; indeed, he has been writing about the topic since at least 1986. Moreover, Images of Terror is not simply about terrorism itself, but rather about the social construction of terrorism as a concept and problem. Jenkins has considerable experience with the “social constructivist” approach: Images of Terrorism is the third book he has written for Aldine de Gruyter's “Social Problems and Social Issues” series.

As the author is careful to explain, social constructivism does not deny the hard reality of specific acts of violence—of suicide bombings, hijackings, and assassinations. But what makes a particular incident an example of terrorism, rather than a conventional crime? It might be possible in the abstract to formulate a definition of terrorism with which most reasonable people would agree, and Jenkins cites just such a definition from the U.S. State Department. In practice, however, as Jenkins argues, the understanding of the problem that prevails at any given moment has been shaped by the news media, interest groups, government agencies—often different agencies with competing agendas—and by a variety of other forces.

Significantly, as a new understanding of the problem takes hold, older interpretations may be forgotten entirely and even retroactively discredited. The interpretation that was plausible in the 1980s became, under the influence of a changing ideological climate, a thing that only crackpots believed in the 1990s. This, says Jenkins, is what happened to the theories of those who warned of the dangers of Islamic terrorism during the Clinton years. In the 1980s, when terrorism was understood as a phenomenon connected to outside dangers—to the Cold War and the Iran-Iraq War, for example—such warnings might have been taken seriously. In the 1990s, however, terrorism increasingly came to be understood as something associated with domestic far-right militants, and those who talked too much about Islamic terrorism risked being dismissed as racists or Islamophobes. After 9/11, the prevailing understanding changed again, and people who may have sounded like cranks five years earlier were now experts on a real and obvious danger.

During all these years, however, while the images of terror shift, the reality of terror may remain constant. Terrorism in United States is certainly not a recent development. Jenkins provides a chart enumerating more than forty-nine major acts of terrorism in the United States between 1939 and 2001; he notes, however, that despite this long history of terrorism, news media would often react to a major terrorist strike within the country as if it were the first time terror had come to the United States. The media, however, are not alone in their forgetfulness and revisionism. Jenkins argues that intelligence agencies and government departments also change the way terrorism is understood, prompted by changing diplomatic and political realities.

Some of the cases he cites can be quite revealing. Take, for example, the bombing of Pan Am Flight 103 over Lockerbie, Scotland, in 1988. Reports in the press, drawing on sources in the intelligence community, originally pointed to Iran and Syria as state sponsors of this terrorist act. That claim fit conveniently with the U.S. diplomatic stance at the time, which was hostile to Iran and highly critical of Syria. In 1990, however, the official interpretation of this event—with news media again reflecting the views of intelligence sources—changed, and now Libya was blamed for the attack. Some new evidence was cited, but did the change owe more to a new U.S. line on Iraq in the lead-up to the first Gulf War? By 1990, Syria was needed as a U.S. ally in the war against Saddam Hussein, who had surpassed Iran as the major threat to regional stability. The new revelations in the Lockerbie case could not have come at a more convenient time.

Jenkins suggests that political reversals play into the interpretation of many other terrorist incidents as well. The anthrax attacks that followed 9/11 initially seemed to be connected to Islamic terrorism, but once more, as the U.S. government found itself in need of Arab allies in the lead-up to the war with Afghanistan, a new suspect was found, this time in the form of a domestic “lone nut.” Similarly, Jenkins wonders whether 9/11 hijacker Mohamed Atta indeed might have met with an agent of Iraqi intelligence in the Czech Republic earlier in 2001. Czech intelligence originally claimed that he had done so, but the Czech government later disavowed that report. Might the government have had other reasons for discrediting the story? An Iraqi connection to 9/11, no mater how tentative, would have been cause for war, something that Jenkins says the U.S. State Department was eager to avoid at the time.

The critical reader must not only be skeptical of official government (or government-sourced) pronouncements, especially when they change suddenly, but, according to Jenkins, also be wary of taking the claims of terrorist groups at face value. Both terrorists and governments have been known to use false fronts, a practice to which Jenkins devotes an entire chapter. They may do so in order to carry out an action with which they cannot be publicly identified or in order to stigmatize an enemy group or simply to sow confusion and instability. Yes, governments also use false fronts—Jenkins cites the case of a Spanish counterterrorist force that disguised itself as a Basque terrorist organization in order to conduct operations across the border in France against an actual Basque terrorist group, the ETA. Moreover, the infiltration of terrorist groups by intelligence agents and the “turning” of terrorists into government informants further blurs the distinction between terrorists and counterterrorists. An agency may often be very reluctant, says Jenkins, to admit just how deeply implicated it is with a terrorist group, either because of the criminal nature of the actions taken by agency “assets” involved with terrorists or for more prosaic security reasons. Secrecy, after all, is characteristic of both terrorist and counterterrorist organizations and makes an accurate understanding of terrorism all the more difficult.

Jenkins counsels against despair, however. There may be things we can never know about terrorism, certainly about specific acts. In general, however, consumers of news and information can adopt strategies to arrive at the clearest understanding possible. First, says Jenkins, readers must ask, “How do we know this?” (p. 193). They must evaluate the sources—and the sources' sources—carefully. Second, they must “realize that claims have consequences” (p. 193), asking cui bono while considering also how a certain piece of information may harm the interests of various actors. Finally, “the greatest weapon for the critical consumer of terrorism claims is memory” (p. 194). Images of Terror as a whole is concerned with that third point: the purpose of a social constructivist analysis, after all, is to show that things have not always been understood the way they now are and that other interpretations are possible. Memory provides some context and some grounds for hope in the effort to understand terrorism.

It is fortunate that Jenkins is as talented a writer as he is because Images of Terror condenses a great deal of social theory and factual material into fewer than two hundred pages of text. With such a compact work, the worst errors are inevitably those of omission. Although Jenkins asserts the need for critical evaluation of sources, he does not discuss in great detail the ideological and professional biases of his own source material. In his chapter on Iraq and state sponsorship of terrorism, for example, he cites such contentious and highly ideological sources as Michael Ledeen and Laurie Mylroie, two well-known “hawks.” Mylroie, in particular, has been widely criticized for her attempts to link Saddam Hussein to such acts as the bombing of the World Trade Center in 1993. It would have been enlightening for Jenkins to tell the reader how he evaluates the credibility of such a source. Jenkins himself, as he acknowledges in his first chapter, also “would probably be considered a hawk on aspects of Middle Eastern policy, including the need for confrontation with powers like Iraq and Iran” (p. 15). In making this admission, he honorably identifies his own predispositions, but some additional discussion of just what assumptions go into being a hawk or a dove would have been helpful.

The book's other major flaw is that despite its early clarification that social constructivism does not deny reality, Images of Terror does not give nearly enough credit to the weight of events. Surely the brute facts of the Oklahoma City bombing go further toward explaining the social construction of terrorism after 1995 as a domestic, far-right phenomenon than do the ideological predispositions of the Clinton administration and the public-relations concerns of the Arab and Islamic lobbies. The point is not that interpretation falls out the picture in the light of such overwhelming realities as the bombing of the Murrah building or the 9/11 attacks, but such events unsurprisingly help to privilege certain interpretations over others. On a smaller scale, similar doubts can be raised about some of the particular case studies that Jenkins presents. Because Images of Terror is not a book about terrorism itself, but about how terrorism is understood, these cases are not studied in minute detail. Without such detail, however, especially where an event such as the Lockerbie bombing is concerned, how can one say whether one account is more reliable than another? The creation of such doubts suits the purpose of this book well; nonetheless, a full and critical understanding of terrorism and its conceptual construction requires as much specific, verifiable information as possible.