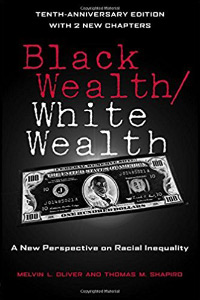 Few policy problems are as explosive or persistent as racial inequality. Fewer still have been studied so intensively. The bulk of the work by economists has focused narrowly on earnings. It is known, for example, that the black-white earnings ratio is higher today than in 1940; that much of the increase took place during the 1940s and in the late 1960s and early 1970s; and that recent increases in wage inequality have slowed the pace of racial convergence. Long-term narrowing of racial differences in the quantity and quality of schooling helped to raise the earnings ratio, although the quantitative significance of racial convergence in schooling is disputed. Also disputed are the effects of federal antidiscrimination legislation.

Although more work on racial differences in earnings can (and will) be done, the marginal social product of studying other forms of racial inequality is certainly very high. On grounds of topic alone, Black Wealth/White Wealth is a welcome volume. The core idea is to shift scholarly attention toward racial differences in wealth, because by comparison with earnings, there has been relatively little analysis of wealth. For some readers, this scholarly neglect will seem odd, as racial differences in wealth are several orders of magnitude larger than the differences in earnings. Measured in terms of earnings, a black middle class has emerged since World War II, but the nonhuman means of production are largely beyond its grasp.

Black Wealth/White Wealth is divided into an introduction, seven substantive chapters, and two appendices. Chapter 1 reviews some of the relevant economic history and argues that wealth is a more important indicator of economic status than current income because wealth “brings...power and independence” (p. 32). Chapter 2 reviews various institutional impediments to black wealth accumulation—what Oliver and Shapiro call the “racialization of state policy”—highlighting the historical roles of de jure segregation, the Federal Housing Administration, and the tax code, among other factors. Chapter 3 introduces the SIPP (Survey of Income and Program Participation) database on which Oliver and Shapiro rely and also discusses conceptual problems in the measurement of wealth. Drawing on SIPP data for the late 1980s, chapter 4 presents some basic evidence of wealth inequality in contemporary America, including the unsettling finding (p. 86) that the black-white ratio of median wealth is only 0.08 (8 percent) while the black-white ratio of median household income is 0.62. Inter-spersed with the numbers are summaries and transcripts of various personal interviews of black and white households. The interview sample (about two dozen) was not randomly selected but chosen instead from “personal and professional networks outside academia” (p. 54) in Los Angeles (Oliver) and Boston (Shapiro). Chapters 5 and 6 continue the analysis of wealth inequality, focusing explicitly on racial differences in wealth and their origins. Chapter 7 offers policy recommendations, and the two appendices present additional tables.

Black Wealth/White Wealth has some important deficiencies. With 194 pages of text, it is deceptively long. Although Oliver and Shapiro write well, they frequently repeat themselves, close (if not quite) to the point of padding. Readers not compelled to turn every page (unlike reviewers) can get the gist from chapters 5 and 6, and (if not pressed for time) might skim the policy discussion in chapter 7.

Perhaps because they are sociologists, Oliver and Shapiro could not resist interviewing a few choice subjects. For my money, the interviews add little to the scientific value of the book, precisely because the interviewees were nonrandomly sampled (and would not have been representative, on the basis of residence, if they had been randomly sampled). What is the scientific value of quoting verbatim the profanity of one of the subjects—75-year-old “Kevin” (as on p. 6)? Kevin’s story (p. 159) of how he rose up the ranks in the Boston shipyards—worth a “thousand mobility tables” (p. 158), according to Oliver and Shapiro—and his allegations of racial discrimination by superiors make for interesting reading, but generalizing from the experience of one man (or two dozen) is another matter.

Although Oliver and Shapiro’s notion of the “sedimentation of racial inequality” highlights the role of history in forging contemporary racial differences, they could (and should) have done more with historical context. In a scant three pages devoted to the nineteenth century (pp. 13–15), the authors note that blacks emerged from slavery with little or no wealth but that a quarter of southern black farmers owned their farms in 1900. Other than a passing reference to the 1866 Southern Homestead Act, the authors have nothing to say about the phenomenon of postbellum black wealth accumulation, thereby missing relevant studies by Stephen DeCanio, Robert Higgs, Roger Ransom and Richard Sutch, Loren Schweninger, and this reviewer. Analyses of the public use microdata samples from the 1900, 1910, and 1940 censuses could have shed light on historical aspects of racial differences in self-employment and homeownership, but these (and other historical) data are largely ignored.

The absence of a sustained empirical analysis based on rigorously specified theory will cause economics-literate readers to be frustrated by this book. By definition, wealth at a point in time equals net savings during the previous time period, plus wealth at the start of the previous period plus any returns on that wealth, plus any intervivos transfers during the period. This intertemporal budget constraint can be iterated backward so that wealth at any date depends on the complete evolution of rates of return, earnings, consumption, intervivos transfers, and initial wealth (at date “0”). Hence, racial differences in wealth at a point in time depend on all these factors and, given suitable data, can be decomposed, just as labor economists do for earnings differences. To their credit, Oliver and Shapiro do not ignore economics, and they are well read in the contemporary literature. For the most part, however, discussion of the factors in the budget constraint is scattered throughout the book, rather than presented as an integrated whole.

The closest Oliver and Shapiro come to a true racial decomposition of wealth appears in chapter 6 (and Appendix table A6.2). Unlike the analyses in the previous chapters, which look at cross-tabs (for example, the impact of occupation on wealth), chapter 6 gives race-specific multivariate regressions of current household income, net worth, and net financial assets. Oliver and Shapiro control for demographic factors (for example, age and schooling) of the head of the household, family structure, and—in the wealth regressions—current household income. The regressions of current household income appear reasonable, although I would have preferred (as is customary in economics literature) that the dependent variable be measured in logarithms. The interpretation of the wealth regressions, however, is fuzzy. The only difference between the income and wealth regressions is the addition of income to the latter. Because the wealth regressions already control for the determinants of “permanent” income (for example, age and schooling), the income coefficients really measure the impact of “transitory” or unexplained fluctuations in current income on current wealth. These coefficients, though not uninteresting, are not what most economists have in mind when, thinking in terms of the intertemporal budget constraint, they attribute racial differences in wealth to racial differences in income.

Not that Black Wealth/White Wealth lacks valuable empirical findings or hypotheses worthy of further study. Black households are much less likely than comparable white households to hold financial assets, although why such differences exist is another matter. Racial differences in self-employment need further study, because self-employment remains a significant route toward wealth accumulation. Oliver and Shapiro are forthright in identifying various government policies and banking practices as promoting racial differences in homeownership, and I am convinced that such institutional factors deserve closer scrutiny, as does their suggestion that bequests by the parents of white baby-boomers will exacerbate racial differences in wealth in the foreseeable future.

Given the current political climate, Oliver and Shapiro are under no illusions that their policy recommendations will be quickly implemented. I doubt that most Americans favor higher inheritance taxes or replacing the mortgage-interest deduction with a “simple homeowner tax credit” (p. 184), or that Congress will act swiftly to raise the capital gains tax (p. 184). Oliver and Shapiro do not favor reparations payments to blacks, and they emphasize strongly the need to increase black self-employment and reinvestment of profits in black-owned enterprises. Enforcement of antidiscrimination legislation should be strengthened, and I agree that more can be done at the local level to encourage economic development and asset accumulation within the black community.

In sum, Black Wealth/White Wealth is a flawed but important book. Unconvincing as it may be in certain details, its message deserves to be heard and widely debated.