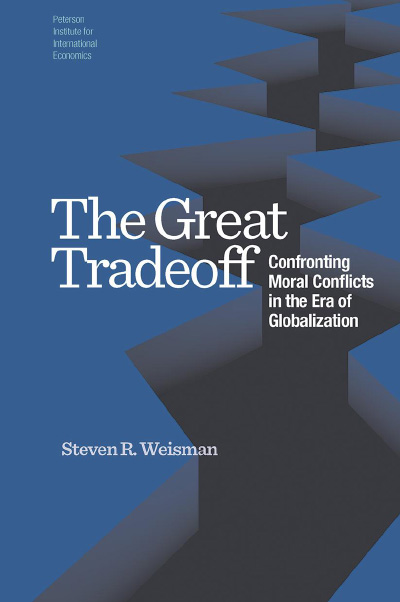 The Great Tradeoff
Confronting Moral Conflicts in the Era of Globalization
By Steven R. Weisman
Kindle Paperback
This book review is a web exclusive for the Summer 2017 issue of The Independent Review.

Economic growth has produced a world with the highest level of affluence in history. Yet among the fortunate crowds are also people who feel left behind, disadvantaged, and forgotten by society and the political system. In disputes over economic policies, calls for a just, equal, and fair society are met with arguments about the principles of freedom and aversion to policies causing moral hazard. Ideological camps engage in a trench war of words that seems insolvable at the best of times and socially toxic at the worst.

Into this debate steps Steven R. Weisman. His book, The Great Tradeoff: Confronting Moral Conflicts in the Era of Globalization, goes beyond ideology to dive into the moral aspects of equality, poverty, and, economic freedom. In an era seeing the rise of populism, calls for a basic income guarantee, and the return of protectionism as a powerful force in politics, Weisman sets out to tackle some of the most vexing questions that arise from this development.

Weisman structures the book around three sets of tradeoffs, “(1) the conflicts between liberty and justice in society and the marketplace; (2) the conflicts between the need to sustain a virtuous behavior of trust (by governments, individuals, and banks) and the need to recognize the realities of the modern global economy; and (3) the conflicts between ensuring economic justice for one’s own community and insuring it for others in the world at large, especially for the world’s poorest citizens” (p. 3). Number two is basically about avoiding moral hazard versus saving people, institutions, and companies who get themselves into trouble.

Contrary to its title, this book does not focus on globalization. Much more than that, it offers rewarding reading for anyone who wants to think deeply about the large conflicts of modern society. By setting the moral controversies in their historical context, Weisman shows that the tensions are not recent phenomena. Condemnations of commerce, for instance, are found in scriptures such as the New Testament. Jean-Jacques Rousseau was arguing mid-eighteenth century for government redistribution. The discourse of today around international trade agreements and welfare institutions has roots spanning centuries back in time.

The first tradeoff is that between justice and economic liberty. Weisman’s contribution on the topic is laudable, not least in his historical overview of the public discourse on equality and liberty, with an emphasis on the past century. Unfortunately, he muddles the concepts at the onset by equating justice with equality. Weisman should have explained at the onset whether he is concerned with equality of opportunity or of outcome. The discussion would have benefited from applying Isaiah Berlin’s distinctions between positive and negative liberty. Readers may justifiably relate justice as that of opportunity and a negative liberty, and equality as a positive liberty focusing on outcome.

Despite this shortcoming, Weisman’s exploration of equality versus liberty will be educational even for readers with knowledge about economics and philosophy and who have pondered these issues already. Because humans are social, empathetic, gregarious animals we value equality as something inherently good. This may explain the many voices for distributional policies and against social and economic inequality. A potent force for the equality cause in recent years is French economist Thomas Piketty, who warned of a coming era of extreme inequality in his best-selling book, Capital in the Twenty-first Century (Cambridge, Mass.: Belknap Press, 2014). Weisman refers to Piketty’s findings on the rise of inequality within several countries, but also points out that inequality has actually decreased globally.

While Weisman is mostly convincing and balanced in his take on inequality, he also makes some staggering claims in the eyes of a classical liberal. For instance, he argues that it is “easy to say that globalization-driven economic growth, underpinned by the freeing up of trade and investment, would be morally unacceptable if it benefited the rich and hurt the poor. But growth that benefits the rich and the poor (leaving out the middle class in the developed world) is harder to assess on a moral scale” (p. 61). Those who believe that the absolute level of wealth for the poorest in society is the most important goal of public policy would hardly agree. Fortunately, Weisman also states that helping the poorest is a more laudable goal than “making the reduction in inequality the be-all and end-all of public policy” (p. 65).

The most interesting part of the book deals with the role of government in fostering virtuous behavior of trust in the marketplace. As the world of finance seemed to be about to come crashing down in the fall of 2008, Timothy Geithner was making the case for saving the banks to save the system. Allowing for the system to collapse into a second Great Depression would have been the greatest immorality of all, he claimed. His critics pointed to the moral hazard inherent in the role of the government as a backstop for failing financial institutions and other businesses. If these institutions know the government stands ready to pick them up as they fall, they will take on larger risks.

Weisman offers new insights for those who believe moral hazard should be consistently avoided. Moral hazard, he points out, is not a one-sided problem. If a borrower feels he is insured against great losses, he will take on larger loans for riskier projects. However, the lender is subjected to moral hazard as well. A lender expecting a bail-out of the borrower will do less due diligence when deciding whom to lend to. In the age of IMF loans, borrowers and lenders alike rely on the fund to come to the rescue. Credit markets function well only when borrowers and lenders alike have the incentive to do their part to make sure the loan is ultimately repaid. Weisman argues that the projection of guilt when reckless lending ends in default is ultimately a moral consideration that reflects old cultural proclivities to blame one party or another.

Weisman argues that the flip-side of avoiding moral hazard is subjecting people to economic hardship. This may be necessary to teach everybody a lesson, but it begs the question: How much deprivation is needed to foster virtuous behavior? If more hardship is always better in the long run, then policy makers should exacerbate crises such as the 2008 financial bust, rather than alleviate them. This tradeoff seems even trickier considering that economic hardship often includes people who cannot in any way be blamed for the default situation.

Weisman similarly describes social safety nets as issues of moral hazard guided by our moral values. People living off society will refrain from improving their situation. Others will take on excessive risks, knowing that support is waiting for them in case they are ruined. England has a tradition spanning centuries of distinguishing between the deserving and undeserving poor. Such policies reflect the ethical prescription that if moral hazard led you to depravity, you are less deserving of help than if you were truly unlucky. In the 2008 crisis in the United States, bailouts could have been offered on the same premise. But since many of the financial institutions that took on excessive risks were also systemically important, that would have meant teaching a harsher lesson that any politician seemed ready to allow for the system as a whole.

p>Weisman’s discussion on loyalty is about defining just who should be included in the protection against poverty and inequality. You may feel loyalty to the nearest community, your own country, or the world as a whole. Evolution has taught us to promote our own gene pools, a proclivity which cannot explain the loyalty people feel towards the nation state, which is a relatively new phenomenon.

Loyalty to a country drives people to avoid buying from foreigners, prevent companies from investing overseas, and shut immigrants out. People in Congress frequently vote for or against bills on the basis of local job creation. It may seem the current politics of the U.S. is leading us from a history of openness to one of protectionism. But as Weisman points out, lowering trade barriers has never been a popular stance. It was not in the Kennedy years and Bill Clinton was a NAFTA critic who vowed and pursued to renegotiate it before promoting the trade deal.

Weisman points to several of the fallacies of protectionism. Not only do the poorest Americans benefit most from cheap imported goods. Anyone with a pension account is generally invested in multinational companies. Such investors may decry outsourcing and foreign investments, yet rely on the multinationals to make the right decisions for their pension plans to remain solvent.

In the era of Trump and European populism, this is a timely book. Pick it up in ten years time, though, and it still will be.

Throughout his writing, Weisman takes the reader though a large swath on academic research on topics such as income distribution, employment effects from trade, and economic growth. The book thus serves as a great resource for references on the explored topics. The goal of the book is seemingly to stake out the different views without making a judgment call. In this, Weisman mostly succeeds. His numerous examples and discussions show that questions about equality and openness have a rich history of discourse and are hard to solve when deep-rooted moral considerations are taken into account. It should teach anyone taking an absolute stance to be humble when confronting the other side of the arguments.

After teaching us that lesson, Weisman engages in an unfortunate twist at the end of the book, by suggesting that international organization may be a way to solve the conflicts we see playing out between equality and liberty. The problem, as he so elegantly lays out throughout the book, is that these moral contradictions have neither ideological, nor economically optimal solutions. This should mean that no particular tradeoff between moral values should apply to all societies in all countries of the world. The book taught me that because cultures and history matter in the tradeoffs he discusses, one must accept that different levels of justice, equality and the like can prevail in different places—even more than one framework per country. Thus, it is a case for a more decentralized system. This is not a case for super-national organizations.

Throughout the book, Weisman argues convincingly that you cannot escape the tradeoffs between values in the conflicts over equality and liberty, rules on borrowing and lending, and free trade. No absolute stance is ever sustainable. Wherever you land regarding social welfare or moral hazard versus system stability, you are drawing the line at a point where you think benefits outweigh the costs, whether moral, political, or economic.

One cannot say, therefore, that one group is absolutely right or wrong. It is merely a difference in strength of emphasis. Ultimately, I see Weisman’s message as one of bipartisanship. Because we are all weighing the importance of moral principles and efficiency concerns, we can find middle grounds and common solutions. We are not locked into any corners. Ultimately, while having to make tradeoffs when it comes to the big questions facing the global community today is not an appealing proposition, it is also the only right way to ponder sustainable solutions.