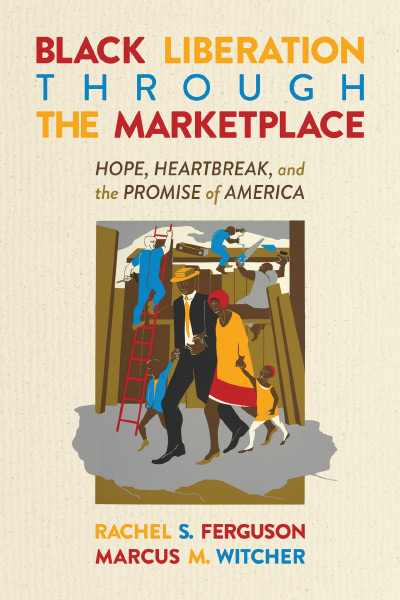 Black Liberation through the Marketplace
Hope, Heartbreak, and the Promise of America
By Rachel S. Ferguson and Marcus M. Witcher
Kindle Paperback Audiobook
This book review is a web exclusive for the Fall 2022 issue of The Independent Review.

Conventional wisdom tells us that government interventions beginning with the Emancipation Proclamation and continuing to the present have dramatically improved conditions and the quality of life for blacks in America. Rachel Ferguson and Marcus Witcher offer a refreshingly different and welcomed alternative perspective: markets and classical liberal principles emphasizing individual initiative and entrepreneurship have been the true source of most of the improvement in conditions for black Americans. That said, I think this book opens the door to other scholars to further and more rigorously pursue the idea that competitive market-based capitalism has done far more to advance the welfare of black Americans than governments, something that until very recently relatively few blacks generally seemed to appreciate or support politically.

Ferguson and Witcher argue that in a world with small government interventions, neighborhood communities, churches, mutual aid societies and fraternal organizations provided needed support for people in distress, and that black communities in particular enthusiastically embraced these civic institutions. Black churches, for example, were particularly robust and strong. Traditional family life was venerated and encouraged as were such capitalistic virtues as saving and investing for the future. The most venerated leaders within the black community in the first half century after emancipation, Frederick Douglass and later Booker T. Washington, embraced capitalist values such as saving, attaining employable skills, and hard work.

By contrast, government, especially at the state and local level in the South but also even to a lesser extent at the national level, cruelly and effectively stifled black economic initiatives, for example, passing laws or enacting regulations that not only denied them effectively the right to vote but also to own property, open businesses, and enter many occupations. Established white business interests used the power of the state to stifle black competition. Inferior schools for black children were created by governments that were literally enshrined in constitutional law in the infamous Plessy v. Ferguson decision in 1896. The federal interstate highway program enacted in the 1950s led to massive freeway construction that destroyed vibrant black inner-city neighborhoods and helped weaken some of the positive aspects of civic institutions like mutual aid societies. (The assertion on p. 232 that the federal highway system subsidized...transportation costs to and from work” is, however, somewhat overstated). The authors also do a good job of detailing legislation that led to wage distortions that hurt black workers, including minimum wage and other laws reducing black employment and promoting unions that often were hostile to black membership.

One area where some readers of conservative or even libertarian inclinations might disagree a bit with Ferguson and Witcher relates to incarceration. They generally believe too many people are in prison for too long, doing little to deter crime. Civil asset forfeiture, correctly comes under particularly strong criticism, arguing it is in effect an unjust and arbitrary form of taxation used to help fund police departments.

Any book of several hundred pages usually has at least a couple minor errors, but in my opinion the incidence of them in this volume is sufficiently large to materially reduce the credibility of the findings to readers. Readers learn, for example, that “defenders of the slave system hated the philosophy of free trade” (p. 52), which rather startled me after teaching American economic history for over a half a century. The evidence is pretty clear that the South by and large favored low tariffs in the antebellum period. Indeed, perhaps the ultimate Southern “defender of the slave system,” John C. Calhoun, bitterly opposed the high 1828 “Tariff of Abominations” and the nullification crisis of 1832 ensued when South Carolina challenged the authority of the federal government to impose federal tariffs on its citizens.

Other examples of sloppy wording detract as well. We are told (p. 320) that “Governor Ronald Reagan passed the Mulford Act of 1967 in California.” Legislatures, not governors, pass laws, and both houses of the California legislature had Democratic majorities at the time, so it is a big stretch to say that Reagan “passed” the Mulford Act (dealing with guns). Without any statistical evidence, the authors assert (p. 300) that “most black kids live in suburbs and do well in school...,” a proposition that is at least highly debatable if Census population and data on student academic performance are reasonably valid. Similarly, the claim (p. 28) that “even a ‘benevolent’ master...could rarely avoid the financial temptation to separate enslaved families” would be disputed by many, including the late Robert W. Fogel and coauthor Stanley Engerman in their extremely influential work (1974, Time on the Cross: The Economics of American Negro Slavery, (Boston: Little, Brown).

Yet the errors of commission are probably smaller than the errors of omission. The influential Moynihan Report (1965, The Negro Family: The Case for National Action, Washington, D.C.: U.S. Department of Labor, March) importantly pointed out that traditional two parent black family life was in big decline. Charles Murray’s 1984, Losing Ground: American Social Policy 1950–1980(New York: Basic Books) demonstrated how an expanded welfare system contributed to such pathologies as declining black employment participation and poorer school performance. Neither of these important works is even cited by the authors, and not until the book’s “epilogue” does one find even an abbreviated discussion of contributions of such popular black classical liberal writers as Thomas Sowell (1983, The Economics and Politics of Race, and other books), Walter Williams (1982, The State against Blacks), and Jason Riley (2014, Please Stop Helping Us: How Liberals Make It Harder for Blacks to Succeed).

More generally, accounts like this cry out for empirical evidence, and this book is deficient in that regards. There are no tables in the book, and only two small graphs, one dealing with crime rates whose last data point is for 2008. There has been a substantial increase since then, a fact that is not mentioned in the book. Statistical claims, when made, are sometimes not even supported by footnote documentation, such as the possibly correct assertion (p. 79) that “the black economy grew at a rate faster than the white economy, improving the average income by more than double and, possibly, triple what it was in the late 1860s.”

Despite all these deficiencies, let me reiterate that I think the authors are broadly correct in their assertion that classical liberal ideas have helped black Americans improve their lot, and that the government interventionist policies prevailing especially after 1960 on balance impeded black progress in America, a point I recently made here (2021, “Four Centuries of Black Economic Progress in America: Ideological Posturing versus Empirical Realities,” The Independent Review, 26 [Fall]: 287–306.) It would be great if other scholars followed in Ferguson and Witcher’s footsteps.

Such additional accounts might argue more forcefully how black progress was blocked by the Great Society and related spending programs in the 1960s. As Ferguson and Witcher note in passing, the proportion of working age blacks who were employed exceeded whites in the 1950s, but fell below that by the 1970s and since as blacks were lured into government welfare state dependency. The Democratic Party, gaining a near complete monopoly of the black vote from the New Deal of the 1930s onward, increasingly took actions that prevented blacks from fully realizing their entrepreneurial and innovative potential, using racial identity politics to superficially show support for blacks (for example, by appointing a goodly number of black government officials) while the negative aspects of welfare dependency largely went unabated. The black-to-white income ratio, which rose importantly in the 1940s and 1950s in the era before the Great Society and even strong civil rights legislation, started to stagnate beginning after the transition to Great Society programs in the late 1960s. Interestingly, blacks achieved much of their greatest relative progress (rising incomes, better job opportunities) during the administration of Republican presidents pursuing policies closer to the classical liberal tradition. For example, during the first three (pre-Covid-19 years) of the Trump Administration, complete with big tax cuts, some deregulation of business, and a decline in the proportion of highly progressive judges, black economic conditions improved sharply absolutely, relative to whites and the experience observed under Barack Obama or in the first year of Joe Biden.

A more detailed historical analysis could explore how lives changed for black Americans and other racial minorities during, say, the era of tax reductions under Ronald Reagan compared with his somewhat more liberal predecessors Jimmy Carter and even Richard Nixon and Gerald Ford. Have blacks fared better in states like California, New York and Illinois with broadly progressive leadership rather than in states like Texas, Tennessee and Florida that are decidedly closer to the classical liberal ideal? Does the expansion of government help citizens generally but, more specifically, does it improve the lives of those that rhetorically the interventionist anti-classical liberal politicians assert they want to help? Let’s have a classically liberal scholar with some expertise in statistical analysis team up with a good writer like Jason Riley and prepare such a volume.