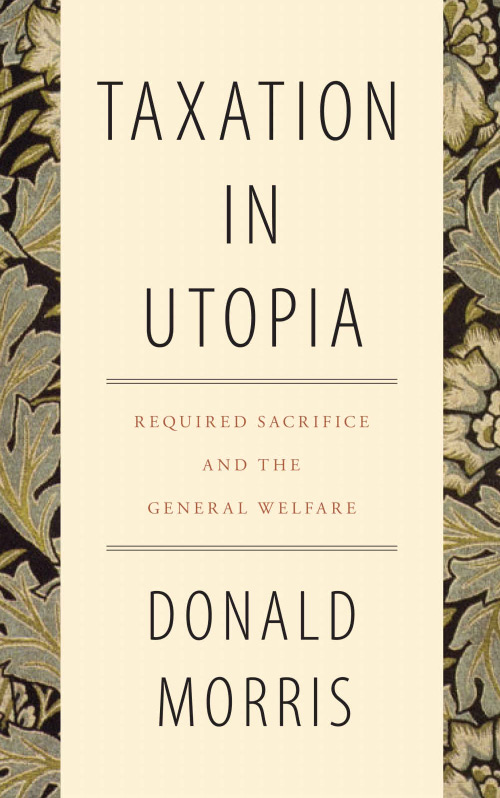 Taxation in Utopia
Required Sacrifice and the General Welfare
By Donald Morris
Kindle Hardcover Paperback
This book review is a web exclusive for the Summer 2021 issue of The Independent Review.

Utopian literature exercises the imagination in a way that most political theory cannot because it alone skirts the dangerous line between ideal theory and narrative fiction. Indeed, many Utopian authors (and their readers) suffer from—shall we say—an overexcitation of the animal spirits and the imaginative faculties. At their best, hypothetical ideal societies can shed light on real social problems and sow the seeds for sober reforms, but since humankind’s political imagination is easily tempted by illusions, it is important to temper these enthusiasms, and to insist that the moral and institutional feasibility of Utopian schemes should be tested against our intuitions and experience. Donald Morris’s book, Taxation in Utopia, illuminates the many pitfalls involved in Utopian social engineering. It analyses the taxonomy of the types of sacrificial taxation required to create a Paradise (or Hell) on Earth. The book’s broad, comparative engagement with the Utopian literature is its most commendable feature. In slightly under 300 pages, the book discusses, among others, Plato, Thomas More, Francis Bacon, George Orwell, Henry George, Edward Bellamy, H.G. Wells, Ursula K. Le Guin, Ayn Rand, and Robert Nozick. Although there are no major surprises in the selection, the sheer quantity of authors invites some unique cross-comparisons that are bound to provide many “eureka!” moments for the educated, nonspecialist reader.

Since the author is Professor Emeritus of Accounting (University of Illinois Springfield), his expertise naturally lends itself to a reading of “utopian political philosophy and its ethical underpinnings from the neglected perspective of taxation, defined in its broadest terms” as the coercive imposition of any kind of pecuniary or nonpecuniary sacrifice for the sake of the general welfare (p. 2). Quoting from Black’s Law Dictionary, Morris defines taxation “in its broadest terms” to include various “governmental impositions on the person, property, privileges, occupations, and enjoyments of the people” (p. 2). He introduces the unusual term “constructive taxation” to refer to all the (seemingly non-tax-related) “restrictions utopians place on 1) privacy, 2) access to truth, 3) the assignment of work ..., 4) marriage and childrearing (including marriage proscriptions and eugenic procedures), and 5) the proprietorship of land (common vs. private ownership)” (pp. 2-3). As Morris explains, “though we are accustomed to thinking of taxes as a monetary sacrifice, as revenue for the government, in utopias—and more importantly, in ‘real life’—taxes may involve the legal surrender of diverse facets of personal autonomy” (p. 36). He argues that the Utopian “societies envisioned by More and Bellamy, for example, were not designed to function without taxation but only without pecuniary taxes. It is for this reason that I have chosen sacrifice and coercion as unifying principles, placing taxation in its broadest context” (pp. 36–37). In this lens, even civil rights struggles can be seen as “constructive tax-protest movements seeking to right the legally ensconced balance of sacrifice” (p. 36) embedded in discriminatory institutions that impose disproportionate burdens on sacrificial minorities for the sake of a biased and partial conception of the “general welfare.”

After a brief introduction, Chapter 1 discusses the methodology of the book. The rest of the chapters are divided thematically into varieties of required sacrifice. Chapter 2 discusses “Privacy Deprivation.” The author notes that the abolition or tight regulation of private spaces (and private hours) constitutes an implicit tax burden on Utopian citizens. Chapter 3 discusses “Taxing Access to Truth” by which he means the opacity and secrecy of many Utopian governments, such as Plato’s epistocratic society based on the “noble lie.” Chapter 4 deals with “Required Work or Occupation.” This is one of the most compelling chapters in the book, since manual labour service is one of the oldest forms of taxation that still remains popular in Utopian literature. Chapter 5 discusses “Taxing the Family: Marriage, Childbearing, and Eugenics.” Many scientific Utopias and Dystopias, like those of Orwell, Huxley, and Wells, crucially depend upon the eugenic regulation of family life to encourage the progressive sculpting of human nature on its way to perfectibility. Chapter 6 is a fascinating survey of “Land Taxation.” Aside from the obvious references, like Henry George and Leo Tolstoy, Morris discusses James Harrington, William Godwin, and Robert Owen as important precursors to the debate. Chapter 7, “Taxation Purged from Utopia,” concludes the book by discussing Ayn Rand and Robert Nozick, who both addressed taxation in their ethical and political theories. In the conclusion, Morris warns against the dangers of “opaque government” and urges every Utopian scheme to “openly acknowledg[e] the need for unrequited sacrifice” and “integrate—from the outset—its moral and political principles with a complementary tax system to support and enable the society’s goals” (p. 281). With that, the book ends.

The advantages of reframing Utopian politics in terms of taxation are clear, but through the “taxation-is-everything” lens, the colorful multiverse of Utopian literature is sometimes seen through a glass, darkly. Overall, each chapter is a treasure trove of information, but there is not much overarching narrative to bridge the chapters together into a coherent conclusion, which is a little disappointing. It might even be argued that the inflated language of taxation imposes an unnecessary cost—or to use Morris’ own language, “a constructive tax”—on the reader. Having defined any required sacrifice for the sake of general welfare as taxation, the predictable result is that taxation appears omnipresent in the form of “restrictions on privacy and access to truth, required work or occupation, controls on marriage, restraints on childbearing, enforced eugenic procedures, and legal constraints on the proprietorship of land.” Indeed, he goes on to say, “nor is this list exhaustive, for the forms of required sacrifice may prove boundless” (p. 282). I remain unconvinced that much new is revealed by this Gestalt shift. Scholars have long been aware of the pervasively coercive and sacrificial nature of the demands that Utopias impose. Instead of taxation, they have discussed them in terms of a smorgasbord of signifiers, such as coercion, sacrifice, oppression, discrimination, collectivism, control, regulation, hierarchy, power, domination, authoritarianism, totalitarianism, etc. In the final analysis, a healthy methodological pluralism is probably the most appealing—and most effective—way to fully comprehend the many sides of the negative burdens imposed by Utopian social engineering. The taxation lens should be added to the list, but it should not subsume all other perspectives. In a curt footnote, Morris anticipates this objection: “Some readers may object that under this definition of tax nearly any law or regulation must qualify as a tax. I believe, however, that reflection on actual examples will dispel this concern” (p. 36, footnote 148). However, Morris only mentions one example of legislation that is not sacrificial, namely, “traffic laws.” Fair enough, but I would have liked to see a few more examples to disprove the suspicion that (almost) everything is a tax. In addition, Morris builds his conceptual apparatus around the notions of “coercion” and “sacrifice,” which have their root in the liberal theory of entitlements or rights. Morris stealthily accepts the premise that “the primary moral challenge of taxation is balancing sacrifices. Tax laws limiting opportunities and picking winners and losers impose sacrifices on some people for the profit of others” (p. 2). But there cannot be sacrifices—pecuniary or nonpecuniary—without the sacrifice of some entitlement, just like there cannot be coercion without the loss of some autonomy. Therefore, autonomy and entitlement are the unsung heroes of the story, but they are discussed only in passing.

Overall, Taxation in Utopia makes a valuable contribution to social theory. It offers new taxonomies of actual and potential social schemes according to their diabolically creative sacrificial impositions. Perhaps the main reason to celebrate Morris’s contribution is its ability to provide insightful parallels between pecuniary and nonpecuniary “required sacrifices.” Utopian literature is rife with—indeed inseparable from—demands of sacrifice for the sake of the collective good. Morris reminds us that the full cost of Utopian schemes is measured not in monetary value alone, but in the loss of freedoms, dignity, privacy, autonomy, etc. At the same time, a comprehensive analysis should also take full account of the positive side of the Utopian social calculus. It is not enough to condemn the sacrifices; one also needs to appraise the positive achievements. So, I would like to see future research tackle questions such as: “Who, if anyone, benefits from the various types of constructive taxes? Do the benefits outweigh the costs? When is the sacrifice worth it?” Today, governments demand great sacrifices in the name of fighting climate change, flattening the COVID-19 curve, protecting the integrity of the nation state, winning the War on Drugs, and countless other social goals. Increased familiarity with the sacrificial imagination of Utopian authors can be useful in working out normative puzzles in economics, political science, and philosophy. So, I would urge scholars to take Utopian literature seriously and tap into its vast reservoir of creativity.