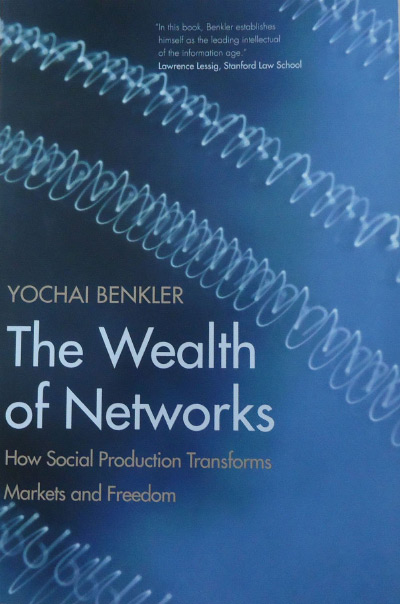 The Wealth of Networks
How Social Production Transforms Markets and Freedom
Yochai Benkler
Kindle Hardcover Paperback
This book review appeared in the Winter 2008/09 issue of The Independent Review.

Yochai Benkler’s The Wealth of Networks is a comprehensive, informative, and challenging meditation on the rise of the “networked information economy” and its implications for society, politics, and culture. Benkler, the Lillian R. Berkman Professor of Entrepreneurial Studies at the Harvard Law School, is a leading authority on the law, economics, and politics of networks, innovation, intellectual property, and the Internet, and he puts his wide knowledge and deep understanding to good use. He argues that the digital revolution is more revolutionary than has been recognized, even by its most passionate defenders. The new information and communications technologies do not simply make the old ways of doing things more efficient, but also support fundamentally new ways of doing things. In particular, the past few years have seen the rise of social production, a radically decentralized, distributed mode of interaction that Benkler calls “commons-based peer production.”

Peer production involves the creation and dissemination of “user-generated content,” including the online Wikipedia encyclopedia and open-source software, such as Linux, that allow users to generate their own entries and modify those created by others. Commons-based peer production is characterized by weak property rights, an emphasis on intrinsic rather than extrinsic (monetary) rewards, and the exploitation of dispersed, tacit knowledge. (Some readers will immediately think of F. A. Hayek’s concept of the market as generator and transmitter of knowledge, though Hayek does not figure prominently in the book.)

The Wealth of Networks is divided into three main parts. The first deals with the economics of the networked information economy. This is well-trod ground, having been explored in detail in Carl Shapiro and Hal R. Varian’s Information Rules: A Strategic Guide to the Network Economy (Boston: Harvard Business School Press, 1998), Stan J. Liebowitz and Stephen E. Margolis’s Winners, Losers, and Microsoft: Competition and Antitrust in High Technology (Oakland, Calif.: Independent Institute, 1999), and other works, but Benkler’s treatment is nevertheless insightful, intelligent, and engaging. The characteristics of information as an economic good— high fixed costs and low marginal costs; the ability to be consumed without exhaustion; the difficulty of excluding “free-riders”—support the widespread use of commons-based peer production.

Benkler proposes social production as an alternative to the traditional organizational modes of market and hierarchy, in Oliver Williamson’s terminology. Indeed, open-source production differs in important ways from spot-market interaction and production within the private firm. But here, as elsewhere, Benkler tends to overstate the novelty of social production. Firms, for example, have long employed internal markets; delegated decision rights throughout the organization; formed themselves into networks, clusters, and alliances; and otherwise taken advantage of openness and collaboration. Many different organizational forms proliferate within the matrix of private-property rights. Peer production is not new; rather, the relevant question concerns the magnitude of the changes.

Here, the book suffers from a problem common to others in this genre. Benkler provides a wealth of anecdotes to illustrate the new economy’s revolutionary nature, but little information on magnitudes. How new? How large? How much? Cooperative, social production itself is hardly novel, as any reader of “I, Pencil” can attest. Before the Web page, there was the pamphlet; before the Internet, the telegraph; before the Yahoo directory, the phone book; before the personal computer, electric service, the refrigerator, the washing machine, the telephone, and the VCR. In short, such breathlessly touted phenomena as network effects, the rapid diffusion of technological innovation, and highly valued intangible assets are not novel. (Tom Standage’s history of the telegraph and its revolutionary impact, The Victorian Internet[New York: Walker, 1998], is well worth reading in this regard.)

Part two, “The Political Economy of Property and Commons,” is the book’s most original, provocative, and—for me—frustrating section. Benkler sees social production as a powerful force for individual liberty. People used to be passive recipients of news, information, norms, and culture; now they are active creators. Each participant in an open-source project, each creator of user-generated content on Wikipedia or YouTube, “has decided to take advantage of some combination of technical, organizational, and social conditions within which we have come to live, and to become an active creator in his or her world, rather than merely to accept what was already there. The belief that it is possible to make something valuable happen in the world, and the practice of actually acting on that belief, represent a qualitative improvement in the condition of individual freedom” (p. 137).

What Benkler means by “freedom” and “liberty,” however, is not the classicalliberal notion of the absence of state coercion, but the modern liberal view of “autonomy,” individuals’ ability to achieve their goals without restraints, voluntary or otherwise. This understanding of liberty, which originates with Kant and Rousseau, is central to Benkler’s political economy. Autonomy means that “individuals are less susceptible to manipulation by a legally defined class of others—the owners of communications infrastructure and media” (p. 9)—hence Benkler’s sympathy for the commons, an institutional framework in which individuals, not a collective, hold property rights. It does not matter for Benkler whether the collective is a private club, such as the participants of an open-source project or the subscribers to a particular information service or the state. What matters is how the commons facilitates “freedom of action” in comparison to how a system of private-property rights affords freedom.

Benkler strongly opposes privatizing the information commons by allowing owners to exercise property rights. He chides Cisco Systems, for example, for designing and deploying “smart routers” that allow broadband service providers to control the flows of packets through their systems (for example, giving priority to some forms of content over others). This action is akin to erecting toll gates on the Information

This approach has some problems. First, although information itself cannot be “owned,” the tangible media in which information is embedded and transmitted are scarce economic goods. Information may yearn to be “free,” but cables, switches, routers, disk drives, microprocessors, and the like yearn to be owned. Such innovations do not spring from nowhere; they are the creations of profit-seeking entrepreneurs that consumers or other entrepreneurs purchase to use as they see fit. Of course, private property can be nationalized. Federal, state, and local governments can ownbroadband lines as they own streets and highways, or they can treat network infrastructure as a regulated public utility. If these resources are to be treated as public goods, then what about computers, iPods, and cell phones? Are these gateways to the Information Superhighway also part of the digital commons? If individuals can own cell phones, can they sign contracts with service providers to deliver whatever content is mutually agreed upon? Content providers and consumers are free to terminate their agreements if they are unhappy. In this sense, a private-property regime allows as much “autonomy,” in the libertarian sense, as a commons-based system. Moreover, if one takes into account the problems of collective ownership, about which Benkler is largely silent, the case for the commons becomes even more problematic.

Second, Benkler appears to adopt the Frankfurt school view of consumers as passive recipients of culture, easily manipulated by powerful corporate interests. “From the perspective of liberal political theory, the kind of open-participatory, transparent folk culture that is emerging in the networked environment is normatively more attractive than was the industrial cultural production system typified by Hollywood and the recoding industry” (p. 277). However, as Tyler Cowen, Paul Cantor, and others have argued convincingly, commercial culture—which properly includes Elizabethan theater, classical music, and the Victorian novel, as well as television, movies, and popular music—has always been participatory in the broad sense Benkler describes. Far from being passive consumers of culture, individuals have played an active role in shaping the plays, books, songs, and shows made available to them simply by deciding to buy or not to buy, to patronize or not to patronize, to support or reject particular producers and particular products. The main difference today is that technological change—the advent of digital technology, cheap infrastructure, and the like—has lowered the costs of entry (production costs, distribution costs, and so forth), giving consumers additional options besides voice and exit. Is this difference one of degree or kind?

Moreover, in any model of social and cultural production, opinion makers play an important role. Even today, on political blogs and other forms of user-generated content, the range of acceptable opinion among the dominant sites, the ones at the left-hand side of Chris Anderson’s “long tail,” is hardly broader than what one finds in the New York Times or the Wall Street Journal. Yes, a great deal of user-generated content exists, but most of it is ignored and is unlikely to have any lasting influence. An elite group of gatekeepers, Hayek’s “second-hand dealers in ideas,” continues to exercise an important influence on social, political, and cultural trends. In this sense, Benkler seems influenced, ironically, by the perfectly competitive general equilibrium model of neoclassical economics, with its assumption that all agents possess complete, perfect information. He worries: private ownership of digital resources “gives some people the power to control the options perceived by, or the preferences of, others, [which] is . . . a law that harms autonomy” (p. 149). In a world of subjective knowledge and beliefs and of dispersed, tacit knowledge, how can everyone have the same perceived options? Elsewhere he dismisses the effectiveness of competition as a means of enabling “autonomy” under private ownership because of transaction costs. In other words, competition must be “perfect” to be effective. But he undertakes little comparative institutional analysis. What are the transaction costs associated with commons-based peer production?

The book concludes with a section on public policy, summarizing Benkler’s concerns about privatizing the digital commons—what he calls a “second enclosure movement” (p. 25)—and outlining a positive role for the state, whose most important job, he argues, is to maintain openness, or “neutrality,” within the economy’s digital infrastructure. Here, as elsewhere, I find the treatment of government failure much too glib. Information itself is not scarce, but rather, as noted earlier, is embodied in tangible resources that are subject to the usual economic laws of supply and demand. Public ownership implies that a host of agency, information, and calculation problems need to be treated in an appropriately comparative manner, and Benkler does not do so.

Despite these difficulties, The Wealth of Networks is a useful guide to the networked information economy and an eloquent statement of the left-liberal conception of the Internet’s “institutional ecology.” Benkler clearly believes that social production is more than a fad and has potentially revolutionary implications. I remain unconvinced, but I feel much better informed about the relevant issues after reading Benkler’s book.

Peter G. Klein
University of Missouri
EconomyPrivatizationRegulationScience and Public PolicyTelecom and Internet Policy
Subscribe Buy This Issue Get the App