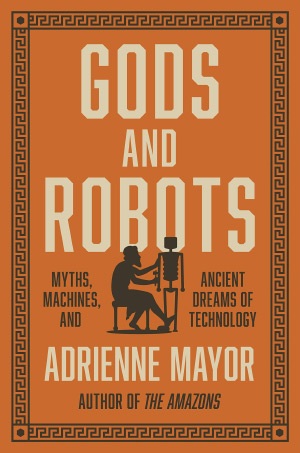 Gods and Robots
Myths, Machines, and Ancient Dreams of Technology
By Adrienne Mayor
Kindle Hardcover Paperback Audiobook
This book review is a web exclusive for the Spring 2019 issue of The Independent Review.

In November 2011, Marc Andreessen wrote an op-ed for the Wall Street Journal, entitled “Why Software Is Eating the World.” His point was simple, but profound, and his prediction has proved prescient: software is to service jobs as robots and automation are to production jobs. We are all used to thinking of automation, dating from J.M. Keynes’ 1930 discussion of “technological unemployment,” as a threat and a promise. But software? Software is not even physical; it’s a virtual robot. But in fast food restaurants around the country, attempts to raise minimum wages to a living level have cause owners and managers simply to turn the cash registers around, letting customers press the buttons instead of instructing employees about which buttons to press.

The protests and violence that was evoked by the earlier, physical wave of automation were led by one “Ned Ludd,” who in fact may or may not have been a real person. It may be true that Ned Ludd, an apprentice weaver from Leicester, smashed two knitting frames after having been abused. But it is not clear whether he was whipped by his master or rudely mocked by some stone-throwing local youths. In any case, the act of breaking machines was imbued with retroactive meaning, and the leadership of “King Ludd,” the defender of labor, was celebrated by Lord Byron in his 1816 “Song for the Luddites”:

As the liberty lads o'er the sea
Bought their freedom, and cheaply, with blood,
So we, boys, we
Shall die fighting or live free,
And down with all kings but King Ludd!

By 1810, the followers of “King Ludd” were active in many parts of England, so active in fact that more British troops were deployed against the domestic revolutionaries than were facing off against Napoleon in Spain. The fear of even simple machines and what they might do was powerful.

But while some may be repulsed and fearful of automated production or software replacing the human touch, people have at the same time always been fascinated and attracted by the possibility of creating technology that could augment human action or fulfill human intentions without direct human control. That fascination intersects with our own urge to be able to understand ourselves, and thereafter to replicate life in anthropomorphic, if not fully human, form. The monster in Mary Shelley’s famous story is actually the human creator Dr. Frankenstein, not the stitched-together chimera. The creature is the victim, given self-awareness without meaning, and being without origin or purpose. It doesn’t even have a name. But the villagers, like the followers of Ned Ludd, went after the creature, the terrifying creation, because the unnatural unborn living thing is what fills our imagination with dread.

Adrienne Mayor, in Gods and Robots, considers some of the history and depth of this impulse, combining fascination with repulsion, for robots, golems, androids, zombies, and other things made by, but not born of, humans. The idea of “metal men” is anachronistic, of course: we mean metal robots, but the Greeks (most notably Plato, e.g. in Book III of the Republic) had metal mixed with their soul, a factor that determined their nobility and ability to lead. The gold people were best, then silver, then bronze, then iron. The city will fall, either to corruption or violence, if someone whose soul is mixed with “wrong” metal is elevated to power. Iron and bronze men lack the ability to understand virtue, because their souls are base metals, but they can accept their place and achieve virtue in the larger system.

The first famous Greek “bronze man” was Talos, creation of Hephaestus, god of the forge. Talos was not a “true” man because he was not capable of virtue. But he was capable of compliance, and he was formidable, able to clutch his opponents into a macabre hug, close to his chest while he roasted them by heating the metal of his body.

Mayor offers a thoroughly researched and diverse catalog of the cyborg/android/robot creatures and forms of literature, focusing on what she calls the “Mediterranean world” but with examples from China and south Asia also included. The author doesn’t pull any punches in her descriptions; one of the oddest “robots” was the artificial cow body Daedalus was induced to make for Pasiphae, who had been cursed by Zeus to desire . . . well, closeness with a bull. Mayor recounts the ancient and apparently unironically serious debate about whether this was plausible, and whether a robotic female cow with Pasiphae hidden—and appropriately positioned—inside would have duped the bull into cooperating. No one questioned whether Zeus would have done such a thing in the first place, because apparently Zeus’s willingness to manipulate his flesh and blood, human robots went without saying.

The diversity of the menagerie of metal, wooden, and otherwise fabricated creatures in Mayor’s catalog is entertaining, as is her description of the obvious fascination that “we” (humans) have with “them” (robots and other kinds of artificial replications). The book is worth reading just to catch glimpses of the breadth of the human imagination, and in many cases the depth of our gullible credulity in accepting these “histories” as at least semi-factual.

Mayor also makes a more serious point, though. When you think about it, we are already surrounded by automatons, though they lack human form. Any time we use a vending machine to buy a soda, an intelligence in the box evaluates whether we have satisfied the terms of sale, and either provides or does not provide the product we have ordered. Our cars evaluate the distance we trail the car ahead of us, and whether it is safe to merge into the lane beside us, providing an auditory or visual signal if the robotic intelligence thinks we are going to make a mistake. Mayor makes an interesting point about the return of the “made not born” automatons: in early mythology the actual process by which the mechanical golem or metal man was made was left to the imagination, a black box. In the industrial age, the details—perhaps fanciful, but details nonetheless—of how the robot actually worked were described as an important part of what was of interest. But we are returning to the “black box” conception, perhaps irrevocably, only this time with automatons that are making themselves. As soon as a machine can learn, and a 3-D printer can print a better 3-D, there is the potential for what some have called a “singularity,” where the nature of our machines will again be left unspecified, only this time because they will be beyond our comprehension. As Mayor puts it:

[W]e are now entering a level of pervasive black box technology: machine learning will soon allow Artificial Intelligence entities to amass, select, and interpret massive sets of data to make decisions and act on their own, with no human oversight or understanding of the processes. Not only will the users of AI be in the dark, but even the makers will be ignorant of the secret workings of their own creations. In a way, we will come full circle to the earliest myths about awesome, inscrutable artificial life and biotechne. (p. 3)

Mayor comes back to this theme at the close of the book. In many ways, the stories we tell each other about the nature of making life are the narratives that we use to understand ourselves. At some point, robots and AI entities are going to develop some form of awareness, of others if not of themselves. Mayor closes by asking what the robots will think of the stories we have told about them. As for me, I wonder what stories the robots will be telling each other.