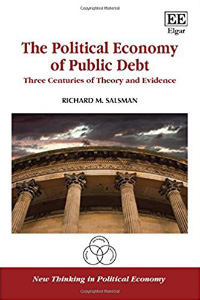 The Political Economy of Public Debt
Three Centuries of Theory and Evidence
By Richard M. Salsman
Hardcover
This book review appeared in the Spring 2018 issue of The Independent Review.

Richard Salsman’s book is an extensive treatment of the theory of public debt as well as of the practice of sovereign borrowing and indebtedness. Equal parts history of thought and applied political economy, Salsman’s project is comprehensive and well written, and the topics it covers are certainly timely.

The introduction provides an overview of the book’s structure and outlines the analytical framework Salsman will use in exploring theories of public debt. Salsman classifies theories of public debt as pessimistic, optimistic, or realistic and the theorists who espouse them as pessimists, optimists, or realists. Pessimists argue that public debt is mainly pernicious, a hindrance to the effective employment of scarce capital. Optimists argue that public debt is mainly beneficial, a necessary part of a strong state’s tool kit in promoting economic prosperity. Realists eschew blanket condemnation or praise of public debt, arguing it may be either pernicious or beneficial depending on social, economic, and political context.

In chapter 1, Salsman covers the history of public debt beginning in the ancient world and culminating in modernity. Key themes are the transition of government debt from the private obligations of sovereigns to liabilities of the public at large, the development of banking systems and their role in facilitating secondary markets for debt, and how central banks affect public-financing conditions. Salsman also provides aggregate statistics on borrowing for the OECD (Organization for Economic Cooperation and Development) countries, showing how the increases in public debt following World War II went hand in hand with larger public spending.

The second chapter focuses on theories of public debt from the classical period of political economy, which in Salsman’s treatment spans from England’s Glorious Revolution (1688–89) to the subjectivist-marginal revolution in economic theory (1871–74). The thinkers are a mix of optimists, pessimists, and realists, but the most famous, such as David Hume and Adam Smith, are certainly pessimists. Also covered are debates between Thomas Jefferson and Alexander Hamilton during the early days of theUnited States as well as later between European classicals such asDavid Ricardo, John Stuart Mill, and even Karl Marx.

Salsman turns in chapter 3 to Keynesian theories of deficit spending and public debt. He first documents the early trends foreshadowing the repudiation of the “oldtime fiscal religion” in the early twentieth century, especially in the years surrounding World War I. Thinkers surveyed include Arthur Pigou, John Maynard Keynes, Alvin Hansen, Abba Lerner, Richard Musgrave, as well as others. These thinkers are decidedly in the optimist camp. Salsman shows that Keynes himself was more moderate on deficit spending and public debt than his heirs. It is the Keynesians rather than Keynes who deserve lasting credit for the academic sanction of public fiscal profligacy.

The title of the fourth chapter, “Public Choice and Public Debt,” is somewhat misleading: about two-thirds of the chapter is devoted to surveying thinkers whom Salsman classifies as precursors to the public-choice school’s chief theorists on public debt. These earlier thinkers include Antonio de Viti de Marco and Ludwig von Mises. James Buchanan and Richard Wagner receive most of the treatment reserved for publicchoice scholars proper, with some attention also paid to Michael Munger and Geoffrey Brennan.

In chapter 5, Salsman engages more recent writings on public debt. Topics include the relationship between public credit and public debt, the determinants of public-debt sustainability, and the differences between debt defaults and debt repudiations. This chapter also goes into significant detail on the relationship between fiscal behavior and monetary behavior. Refreshingly, Salsman appreciates that differences in monetary regimes can profoundly affect the fiscal agent’s choice calculus over debt, its ability to pass on the debt burden to future generations, and the size of the risk premium, if any, it is forced to pay compared to private debt. Although some public economists recognize the institutionally contingent nature of public debt (e.g., its causes and effects under fiat money as opposed to under a commodity standard), Salsman rightly notes that this institutional contingency is not sufficiently appreciated in the literature.

The final chapter is a brief conclusion. Salsman summarizes his arguments, reiterates the importance of the optimist-pessimist-realist categories for public-debt theorists, and warns of the perils that unchecked democracy poses for fiscal responsibility.

Overall, I found Salsman’s book interesting and informative. Scholars of public debt and of political economy more generally will want this work on their shelves. It is a fine text to consult for various research projects as well as to use as a supplemental text in undergraduate or graduate courses on public debt. As I mentioned earlier, I found the sections dealing with the mutual determination of monetary mischief and fiscal profligacy to be the most stimulating. Much more work needs to be done exploring sovereign borrowing strategies and their dependence on the monetary institutional environment.

I do have a few concerns. First, I am not convinced that the optimist-pessimistrealist distinction is all that important to Salsman’s project. The introduction makes it sound as if this classification scheme is the book’s chief purpose, but the categories do not carry much analytical weight. I think the book would have been just as useful with these classifications omitted. Second, I would have preferred a more balanced treatment of the dangers of unconstrained politics. When Salsman warns of the dangers of politics gone awry, he almost always castigates extreme democracy. I am very sympathetic to this point, and I agree that it frequently needs to be made in our age of populist shibboleths. But this emphasis is more appropriate for a popular audience; for a scholarly audience I would have preferred to see more on the dangers of oligarchy or autocracy as well. Third, in his discussion of monetary influences on fiscal behavior, Salsman appears to argue that central banks can hold market interest rates below their natural rate for extended periods of time. Although this is certainly possible in the short run, I am skeptical that it can happen in the medium or long run. The market structure of interest rates obviously matters for borrowing conditions, so how much power central banks have to maintain a wedge between markets and natural rates will affect how we think about public finance.

These concerns do not detract in a major way from Salsman’s contribution, though. I reiterate my enthusiasm for the project and recommend his book to all scholars working on topics related to public debt.