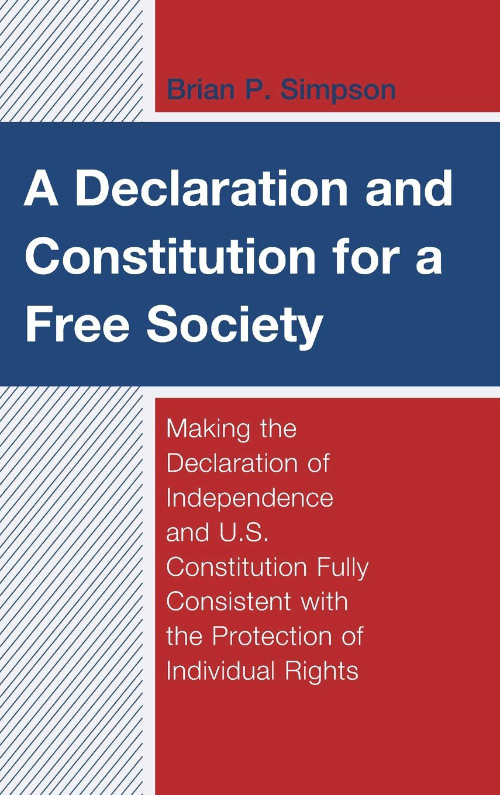 A Declaration and Constitution for a Free Society
Making the Declaration of Independence and U.S. Constitution Fully Consistent with the Protection of Individual Rights
By Brian P. Simpson
Kindle Hardcover
This book review is a web exclusive for the Summer 2021 issue of The Independent Review.

How could the Declaration of Independence and the Constitution of the United States be revised to be fully consistent with the protection of individual rights? That is the thought-provoking exercise Brian Simpson undertakes in this book. Early on (p. 6) he says “I show that only Objectivist philosophy—the philosophy of Ayn Rand—is fully consistent with the protection of rights and freedom.” Not all readers will agree with this. Rand’s philosophy has had supporters and critics. His extensive discussion of Rand’s philosophy early in the book make it appear almost like an appeal to authority, but Simpson’s arguments can stand on their own and might appeal to a broader audience if they were presented as his defense of liberty rather than an application of Objectivism.

Simpson recommends only a few changes to the Declaration of Independence, the most significant being the inclusion of the right to property as an inalienable right and the elimination of all references to God. Consistent with Rand’s Objectivism, rights originate in “reason and reality,” rather than being God-given. Obviously, the Declaration cannot actually be revised as it has already been declared and independence has already been won. Looking at how it might have been written differently suggests the speculative nature of Simpson’s exercise.

Simpson’s recommendations for revising the Constitution extend only to changing the document to conform with the protection of individual rights, and he explicitly does not consider procedural issues or the way that government is organized. As an academic exercise this is not a problem, but it is worth recognizing that the degree to which government can actually protect rights does depend on its organization and procedures. Much has been written on the real-world differences between parliamentary versus presidential systems of government, and between plurality voting and proportional voting, for example. Institutional differences do affect the degree to which governments protect—and violate—individual rights.

Simpson takes aim at the general welfare clause early in his discussion of the Constitution, noting that from the standpoint of individual rights this clause must mean promoting the welfare of everyone, but its broad current interpretation leads Simpson to recommend eliminating those words. This was recommended more than a century and a half ago. Simpson notes (p. 222) that when the Confederate States seceded from the Union, rather than write an entirely new constitution, they copied the U.S. Constitution, almost word-for-word and section-by-section. One thing they changed was to eliminate those words “general welfare.”

Simpson recommends eliminating the government’s power to tax, suggesting instead that it be “financed through voluntary, not confiscatory, methods” (p. 64). He then goes into a discussion of ways government could be financed voluntarily, which seems like an unnecessary diversion. For one thing, if the idea of the book is to rewrite the Constitution based on Objectivist principles, and if taxation violates those principles, it is not necessary to speculate on how this might be done. Some of his speculation itself seems to violate Objectivist principles.

Simpson says (p. 66) “Import duties could also be charged by government to cover the cost of inspecting goods coming into the country to ensure that such goods do not threaten people’s rights in any way.” This seems to suggest that importers are assumed guilty until proven innocent, and opens the door to all sorts of other inspections (occupational licensure, product safety standards) that enable government to proactively prevent some people from violating the rights of others. Also, why should importers be charged rather than the consumers who presumably are being protected from having their rights violated?

Simpson argues that if the government charges someone with a crime who is, in fact, innocent, government should compensate the individual for harm such as a diminished reputation or difficulty finding a job. “Here, the government is responsible for causing the harm so the government has a responsibility to compensate the individual for the damage caused” (p. 104). He gives other examples where government should compensate those it harms. Simpson does not say where a voluntarily funded government would get money to compensate those it harmed. If the import duties or any other fees Simpson says are consistent with Objectivism were used, they clearly would become taxes and those who paid them would be forced to pay compensation for government harms. Because Simpson devotes many pages to speculating on how government could be funded voluntarily, it would seem that he should have discussed funding activities like this that require revenues even though government is not providing anyone with a service.

Simpson says (p. 131) “It is important to understand that the freedoms protected by the First Amendment also apply to corporations.” A few pages later, discussing the Second Amendment, Simpson says (p. 134) “all rights belong to individuals and the purpose of government is to protect individual rights.” Most classical liberals would agree with Simpson’s second statement, which undermines his argument for extending rights to corporations. Corporations, ethnic minorities, religious organizations, and other groups do not have rights. Individuals, who may be members of those groups, have rights.

The Twenty-Second Amendment, which establishes a two-term limit for the president, would be eliminated by Simpson because term limits “are arbitrary restrictions placed on popular politicians” (p. 163). This strikes me as an organizational issue that Simpson initially says he is not considering. It seems reasonable, however, and not a violation of rights, to design a government so that the exercise of its power is rotated among individuals rather than resting with the same people. True, this would prevent popular politicians like Vladimir Putin and Xi Jinping from remaining in power, which may explain why Russia and China both did away with term limits. This is an example where my understanding of Objectivist philosophy differs from his, pointing to one reason why the book might be better pitched as Simpson’s views on rights rather than the Objectivist view.

In addition to modifying existing Amendments, Simpson suggests five additional amendments, which include the right of individuals to choose not to trade with others, the right of women to have abortions, a prohibition on government financial assistance or loans to individuals or organizations, and a right of foreigners to immigrate and become U.S. citizens.

The suggested wording that Simpson says allows abortion reads (p. 186), “The right of each individual to the control of his or her own body shall not be infringed...” which seems ambiguous with regard to abortion. Does a person have a right to swing a sword at the body of another? Those who argue that life begins at conception assert that abortion amounts to the same thing. I am not arguing for or against abortion, but saying that Simpson’s wording leaves open a good argument against abortion, despite his intent.

Simpson notes some similarities between his recommended Constitution and the Articles of Confederation, including the prohibition on federal government taxation and the absence of power to regulate commerce. Noting that the Articles were viewed as deficient in 1787, he argues that his recommended Constitution overcomes many of the shortcomings of the Articles that led to the push for a new constitution. One of the big issues in 1787 was the lack of the federal government’s ability to tax—a change that Simpson would reverse.

This points to another issue. Simpson leaves Article V of the Constitution, which allows for amendments, mostly intact, which means his document could be amended if amendments meet with the approval of two-thirds of the House and Senate and three-quarters of the states. There is nothing to stop his recommended constitution from readopting the Sixteenth Amendment, or amending his Constitution in any other way that might violate Objectivist principles. Simpson devotes 50 pages to discussing ways in which the Constitution’s existing amendments compromise individual rights, yet his redesigned constitution would allow these same amendments to be readopted the same way.

There is much more in the book than I can’t cover in a brief review, so this review is a discussion of some of its thought-provoking ideas rather than a summary of the book. Readers are sure to find some ideas they like but had not thought of before, and likely some ideas of Simpson’s with which they disagree. The merit of the book is that in either case it will push readers to think seriously about their constitutional rights.