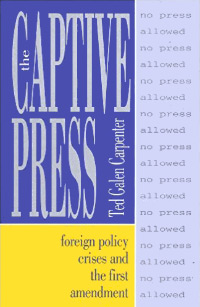 As you read Ted Galen Carpenter’s The Captive Press, you get the idea that “Congress shall make no law abridging the freedom of the press” (the First Amendment) is a lot like “Thou shalt not kill”: good advice, frequently ignored, especially in wartime. Carpenter’s message is that restrictions on what reporters can learn and publish are almost always introduced with the argument that they are necessary to protect national security or the lives of troops, and yet usually serve no purpose other than to mislead the public into supporting bad policy or to protect government officials who have done their jobs poorly.

The few really valid military secrets have never been an issue. Reporter Seymour Hersh once observed that anyone who published technical details about nuclear weapons construction or combat submarine positions wouldn’t find many readers at fifty cents a copy anyway.

Carpenter provides plenty of illustrations of outright U.S. government censorship on matters related to public policy and of government denial of access to important news sites, not just on the battlefield but also in the corridors of Washington. But he is equally concerned with the constant, often successful effort of U.S. government propaganda operations to seduce reporters into slanting the news the government’s way. He provides abundant evidence that self-censorship by reporters—whether inspired by a greedy desire to curry favor with news sources or editors, or just by misguided idealism—can be more dangerous than overt government censorship.

Advocates of open government and a watchdog press will find The Captive Press the perfect supportive literature to hand out to friends and congressmen. It is an ideal cross between a tract and a scholarly tome (which Carpenter should consider adding, as he appears to have done most of the necessary research already). In this volume, the writing is lively, the recitations of data never stray far from a good yarn, the documentation is solid, and Carpenter goes on just long enough about each topic to persuade average citizens without entangling them in unnecessary complications.

Best of all, Carpenter is principled and free of partisan agendas. He isn’t carrying water for Republicans or Democrats, capital or labor, and this neutrality allows him interesting insights. For example, his indignation over the witch-hunts against the Left in the McCarthy era is coupled with the perception that in many ways these injustices had roots in the Roosevelt administration’s wartime propaganda machine, which blocked honest reporting about America’s Soviet ally. After years of coverage in which even Life magazine referred to the Soviet secret police as a mere counterpart to the FBI, a backlash was stirred when the curtain was suddenly lifted on Soviet tyranny. This tardy revelation encouraged not only the McCarthy injustices, Carpenter says, but the “uncompromising attitudes” (p. 38) that led to frequent waste of lives and money in the Cold War.

Carpenter follows his argument into criticism of strict-constructionist courts that have deferred to the White House in its repeated efforts to avoid the spirit of the Freedom of Information Act. He suggests the courts should have actively promoted citizens’ rights in accord with the act’s obvious intentions.

And he accuses President Ronald Reagan, the widely perceived hero of limited government, of an unprecedented White House aggrandizement of information control: a lifetime censorship oath imposed on more than 100,000 government employees, which “gave a sitting administration considerable power to gag any former official whose writings or speeches might embarrass—or even merely contradict—current policy makers” (p. 84).

Carpenter maintains historical perspective. He notes that early in the Republic, the Alien and Sedition Acts “were directed at a group of anti-Federalist editors and pamphleteers” (p. 13) who had produced “criticism of John Adams’s administration’s conduct of foreign affairs” (p. 1). Carpenter otherwise acknowledges that government attempts at information control aren’t new, and he uses some examples from the two world wars. But he concentrates on the Cold War and on various recent crises: U.S. troop missions to the Persian Gulf, Yugoslavia, Haiti, Somalia, and so forth. This focus keeps his narrative up-to-date and interesting, and also shows that elimination of the communist threat didn’t end the press manipulation that supposedly had been justified by the presence of a communist threat.

Carpenter understands the pressures members of the press feel to report the government’s daily dole of selected news in times of crisis, even when what the government says is suspect and leads to a gradual erosion of accurate perspective. He understands why the exceptional story that, after hurdling many obstacles, gets published, revealing the truth about something, is no match for the routine flow of easily published stories to the contrary, generated by government sources. Though these exceptional stories are often cited as examples of how well the press does its job, Carpenter shows that such reports can be diluted into near insignificance by the daily repetition of sanguine propaganda. He tells how U.S. military censors have delayed publication of accurate articles about military shortcomings until other articles can be generated and published to “shape public opinion before it could be challenged by contradictory information” (p. 33).

He cites an alarming litany of cases in which reporters shuttle between jobs in the press and in the State and Defense departments, with even network anchors such as Walter Cronkite accepting jobs narrating Defense Department promotional films. (I confess I twice accepted $500 speaking fees from the FBI training academy, with the approval of Wall Street Journal editors, while I covered crime for the paper. Even though the sums were small and I was clearly speaking my own ideas, not the government’s, when a third invitation arrived a new set of editors said I shouldn’t take the money, and on reflection I think the new editors were right.)

Where to apportion blame for misleading articles in the press remains a complex challenge. Though a democratic government shouldn’t propagandize its constituents, America’s most influential news outlets have hardly resisted the government’s propaganda effort in line with their responsibilities. As Carpenter writes, “The bulk of the press hasºshown a willingness to be cheerleaders for Washington’s military adventures” (p. 247). He quotes the ready adoption of “we” by many well-known television reporters to refer to the American side in a conflict.

Whether this shortcoming has more to do with the weakness of reporters or with the fact that so much of the press is owned by large corporations—including major military contractors and others whose dominant financial interests range far outside the news business—is an issue Carpenter avoids, leaving, perhaps, an unfair onus on the reporters only. The growing activism of large American corporations overseas in recent decades is in part responsible for the growing government activism overseas, which, Carpenter shows, has made government’s violation of the letter and spirit of the First Amendment increasingly dangerous.

Corporate interests aren’t in Carpenter’s line of fire. His point, though, is that the public is often deceived about the quality of news it gets concerning the government it elects and pays for. If he can succeed in persuading people of that—and he will, to the extent his book gets read—he will have performed a great service.