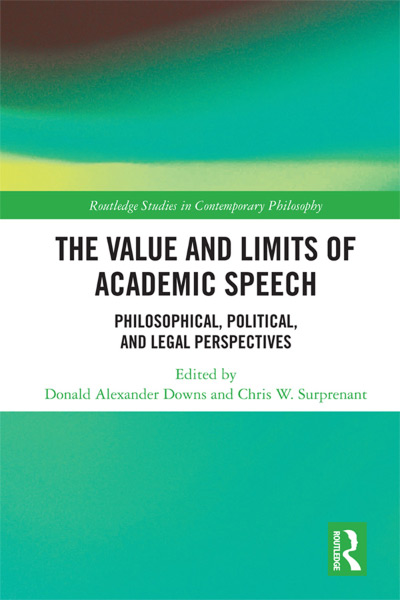 The Value and Limits of Academic Speech
Philosophical, Political, and Legal Perspective
Edited by Donald Alexander Downs and Chris W. Surprenant
Kindle Hardcover Paperback
This book review is a web exclusive for the Fall 2019 issue of The Independent Review.

I think of myself as being reasonably well informed about arguments against (and for) free speech and academic freedom. But this book showed me that I have a lot to learn. Perhaps that’s always the way it goes: you have to know quite a bit before you realize that you know only a little of what there is to know.

Donald Downs and Chris Surprenant (both of whom I know personally, and like, if it matters in terms of personal bias) found that they had each organized a conference on the subject of academic freedom, with the help of the Institute for Humane Studies in Arlington, VA. And the results meshed beautifully, with a few late additions. The resulting book does not seem like a standard “conference volume,” many of which are dry and esoteric. This is great stuff, and it has something for almost everyone.

The first three essays, by Peter Singer, Brian Leiter, and Keith Whittington, are remarkable all by themselves. These three essays alone taught me an embarrassing amount about the existing state of the debate. For example, though I have read Herbert Marcuse a fair amount in the past, it turns out I didn’t understand Marcuse’s main views of academic freedom. In particular, Marcuse views of academic freedom (though not freedom of speech more generally) are quite consistent with those of John Stuart Mill.

Many of the essays distinguish, in ways I did expect and was aware of, the justifications for and implications of academic freedom and political freedom of speech. James Stoner’s essay on this comparison is particularly adept, contrasting the views of Leo Strauss and Michel Foucault. John Hasnas and Jason Brennan, both of the business school at Georgetown, take up a very careful discussion of the crucial importance of academic freedom in private universities. The nice thing about the latter two essays is the philosophical approach: even if we grant the premises of those who struggle to limit academic freedom or outlaw “outside” funding, the arguments for limitation have serious—likely fatal—flaws.

Of the twenty total essays, at least eight (by my count) offer arguments for serious and substantial restrictions on academic freedom, but they do that in ways that (I would hope) would give unreflective supporters of academic freedom cause for thought. Burkay Ozturk and Bob Fischer’s essay on “just war” theory is provocative and interesting; I had not thought of that approach, but the authors are quite right in noting there are significant parallels. Other authors consider humor, Title IX, the problems of authorizing groups on campus to have what we might call “standing” to claim academic freedom, and problems of faculty governance.

The problem lurking in the background, one that some of the essays (especially those by Arianne Shahvisi and Ryan Muldoon) address, is the conception of the nature of academic freedom as both a justification for association and a justification for exclusion. This problem is common in the consideration of private property rights, because “property” means that (1) I get to use the thing I own, and (2) you do not get to use the thing I own, unless I give my permission.

Academic freedom is actually a kind of freedom of association, a license to create and protect “safe spaces.” As Jacob Levy of McGill University has argued, it is simply a mistake to think that freedom of speech is the core academic value; freedom of speech may not even be an important value, when you think about it. The core of academic freedom is the right, and practical ability, to create “safe spaces” where academic inquiry can be carried out. There can be criticism and contention across safe spaces, but within an area of inquiry—a research collaboration, or even a department seminar—it is possible to exclude other points of view. If we want to work on rational choice theory in the political science department, then neither the sociology department nor some outsider concerned with altruistic psychology gets to disrupt our seminar.

If a group cannot exclude members, or cannot expel members who violate its rules, then that is a violation of freedom of association. That would be true if a department was prevented from ostracizing a faculty member guilty of research malpractice, if a club was prevented from requiring restrictions on viewpoint diversity for its members, or if a fraternity or sorority was forced to accept all applicants even if the newcomers shared none of the values of the group.

Most important, no group can annex the entire university, or even substantial parts of it, as their own safe space. The solution to safe spaces you disagree with is your own safe space. The difficulty is that “the truth,” which I surely know and which you apparently lack, cannot be imposed by any group on any other. That tolerance for error, for doing things differently than I want them to be done, puts a great burden on the ability of people who think for a living to think they might be wrong. The essays in this book taught me that I was wrong about many things about which I was sure I was right.