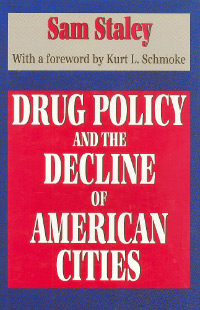 Drug Policy and the Decline of American Cities
Sam Stanley
Kindle Hardcover Paperback
This book review appeared in the Winter 1997/98 issue of The Independent Review.

In Drug Policy and the Decline of American Cities, Sam Staley considers many of the issues at stake in the debate over drug legalization. Objective observers have long noted that prohibition harms many people, including those who do not use illicit drugs, especially the inner-city poor to whom Staley pays special attention. After reviewing a wide variety of arguments for legalization and placing them under libertarian, cost-benefit, and public health rubrics, he proceeds to consider a fourth category: economic development. He concludes that in general “drug prohibition undermines the process of economic development in America’s cities” (p. 6).

Staley’s explanation of the dynamics and interdependence of various markets may be his book’s most valuable contribution. He argues that the drug laws cause, and are caused by, economic problems in the inner cities. The violence endemic to the illicit drug markets serves as a case in point. Staley argues that to some extent the violence arises from government’s growing failure to respect and protect property rights, as evidenced by everything from regulation and taxation to the taking of private property without just compensation. As businesses abandon the poorly protected, high-risk inner cities, drug dealing becomes a relatively more attractive option for the remaining residents. In turn, the negative externalities of an increasing drug trade discourage new or existing legitimate business ventures. And so on, in a vicious downward spiral.

Labor markets also display harmful reciprocal effects. While inner-city government schools leave young people ill prepared for entering the labor market, legitimate employment opportunities become harder to find as business stagnates or declines. At the same time, potential workers consider the variety and generosity of welfare benefits available to them as they decide whether to seek or accept employment, often choosing not to participate in the legal labor market.

Throughout the book Staley aptly describes how markets function, clearly illustrating the principle that legal and cultural institutions go far to determine incentives and thereby to influence behavior. For example, he argues that the greater part of the high earnings of drug dealers amounts to a compensating wage differential required to entice workers into a field that carries some stigma and exposes them to physical and legal dangers.

The workings of the market also explain part of the difficulty of suppressing the drug trade. In the past, when government has changed “the rules of the game” by modifying the size or scope of enforcement, it has influenced specific details of the market but has not greatly affected the overall market. As Staley notes, “changes in narcotic control strategies by governments can alter the supply conditions and underlying cost structure of the industry” (p. 146), but “drug importers have shown a remarkable ability to shift modes of transportation from year to year, depending on the potential for interdiction” (p. 201).

Staley compares and contrasts formal and informal markets. In both, suppliers have incentives to provide high-quality goods and to search for innovative products and services. In both, suppliers respond to price changes, whether those changes arise from altered consumer demands or from selective enforcement of the law. But formal and informal markets also differ in some important respects. In particular, informal markets give greater priority to secrecy and display sporadic and violent administration of “justice.” As Staley emphasizes, the drug market is “a stilted, perverse attempt at economic rejuvenation” (p. 7) in an environment of declining legal economic activity.

These observations call to mind Hernando de Soto’s fine book on informal markets in Peru (The Other Path: The Invisible Revolution in the Third World. New York: Harper & Row, 1989). In each case studied by de Soto, people optimize amid pervasive government regulation. Informal property rights evolve. Although not as effective or comprehensive as the rights in formal markets, they are better than none at all. Likewise in the drug market. For instance, workers acquire skills. This mode of “schooling” may not be the best arrangement, but it is better than nothing. In Urban Illusions: New Approaches to Inner City Unemployment (New York: Praeger, 1987), Michael Bernick observes that among those he tried to empower in San Francisco, the high-school dropouts had greater basic skills than the high-school graduates.

Staley devotes much attention to the market structure and internal organization of the illicit drug industry. Given that most drug users are middle-class people and do not live in the inner city, why are the inner cities the primary locus of drug distribution? Staley notes that “central cities provide a variety of natural defenses against detection by law enforcement authorities” (p. 8). He points to an available labor supply, relatively easy access to drug users and lower-level dealers in surrounding areas, and some advantages peculiar to the inner city, including high population density and great cultural diversity. Under prohibition, the inner city provides the lowest-cost distribution center and, most important, a “convenient hiding place” where dealers “can disappear” (p. 149).

Of course, even though “government failure” may abound in efforts to suppress the drug trade, conditions would not necessarily be better if the drug trade were legalized. Staley considers several criticisms of legalization. Some commentators have argued that “society’s best interests” should take precedence over an individual’s freedom to choose. Staley refutes this point of view. Besides pointing to growing evidence of the damage prohibition wreaks on society, he gives a number of examples of how decision-making procedures intended to promote society’s best interest may be reconciled with the interests of individuals—for instance, even though “the majority rules” under democracy, individuals who belong to losing minorities retain rights. Some writers have worried that legalization would dramatically increase drug use and addiction. As Staley documents, what little evidence we have about the effects of legality on quantity demanded seems to show that demand is inelastic. Although this evidence is not completely compelling, it suggests that worries about greatly increased drug use and addiction may be overblown.

Perhaps the strongest case for prohibition arises from concerns about the addictive properties of drugs. Staley effectively marshals evidence against this case. First, he notes that addicts do not dominate the market and argues that if addiction were largely chemical, most users would be addicts. Further, he provides voluminous data on rates of use versus addiction, and rates of availability versus use. These data cast much doubt on the validity of the addiction argument. Second, he observes that the concept of addiction is highly subjective and argues that most people exhibit considerable control over their intake of drugs. Third, he notes that consumers of legal drugs such as alcohol and tobacco have demanded products with reduced strength. He concludes that “addictive behavior is not as automatic nor as prevalent as the press or many politicians claim” (p. 95).

Finally, Staley considers another provocative question: Why have the costs of prohibition become increasingly obvious over the past thirty years? The answer has several parts: drug use has become more acceptable in American culture and therefore more widespread, increased income has fueled increased demand for drugs, the Mafia’s monopoly power has diminished as advances in transportation and communication have fostered increasing competition, and higher marginal tax rates have made black market activities relatively more attractive. Staley’s theory of the reciprocal effects of the drug market and urban economic development certainly provides an important part of the answer as well. With population movement to the suburbs, declining educational quality, expanding welfare programs, and a plethora of government policies reducing legal job opportunities, the growth of drug dealing should hardly have come as a surprise.

Staley notes that despite the increasing success of the government in seizing drugs and obtaining more convictions for drug manufacturing and distribution, consumer demand has increased and drug prices have remained stable or have decreased. He believes that if the war on drugs continues apace, the public ultimately will recognize that it cannot be won and that its conduct imposes huge costs, especially on the inner-city poor.