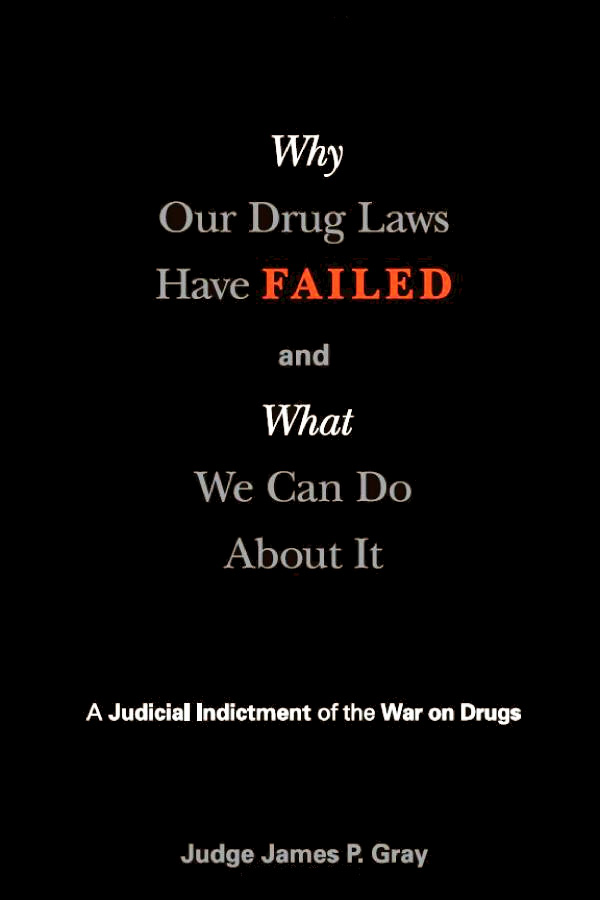 Why Our Drug Laws Have Failed and What We Can Do about It
A Judicial Indictment of the War on Drugs
James P. Gray
Kindle Hardcover Paperback
This book review appeared in the Summer 2002 issue of The Independent Review.

Judge James P. Gray, a California trial court judge since 1983, has come to believe that the war on drugs is an abject failure both on its own terms (stopping illegal drug use) and with regard to its impact on society. As an experienced trial judge and former federal prosecutor who briefly held a record for the largest drug prosecution in the Central District of California, Judge Gray is in a position to speak with authority about what is wrong with the war on drugs. He does so in compelling language. For example, he opens the book by promising readers that drug policy will someday change, and when it does, “we will look back in astonishment that we allowed our former policy to persist for so long, much as we look back now at slavery, or Jim Crow laws, or the days when women were prohibited from voting” (p. 5).

For the most part, Judge Gray offers utilitarian arguments against drug prohibition. Drug-prohibition laws are not actually reducing the amount of drugs available in the United States (pp. 47–94); enforcing drug prohibition is eroding our civil liberties (pp. 95–122); drug prohibition makes drugs more dangerous to drug users (pp. 123–36); and drug prohibition is leading to a stifling of democratic debate over drug policy (pp. 137–48). None of these arguments is new, but Judge Gray does a credible job of recounting the arguments and responding to potential criticisms. Unlike some opponents of drug prohibition, he stops short of advocating full legalization. (To his credit, he does insist that all options, including legalization, ought to be discussed.) His preferred solution is a combination of realistic education, treatment programs, regulated sales of drugs, and punishment for harm to others.

In speaking out publicly over the past decade on the failure of the war on drugs, Judge Gray courageously has joined the ever-growing chorus of federal and state judges who risk their professional reputations by dissenting from the orthodox position of prohibition at all costs. He deserves great credit for his willingness to speak out.

An author’s moral courage alone, however, does not guarantee a great book, and this one is flawed in three important ways. First, Judge Gray relies heavily and at times almost exclusively on popular press accounts to support his factual claims. The vast majority of his citations are to newspaper articles (the Orange County Register, in particular) and news weeklies.

This approach is baffling. It is apparent from the text that Judge Gray knows his subject well. He must be aware of the many government reports and of the vast literature in professional journals on every aspect of the war on drugs. Because the book is published by Temple University Press and offers up the scholarly apparatus of footnotes, one would think that the sources cited in the footnotes would be more scholarly. If the judge had written only an account of his own opinion (which would be interesting, given his experience and position), the citations would be unimportant, but because he attempts to document the failure of drug prohibition, the lack of better-quality sources undercuts his message.

The reliance on popular media as fact sources is all the more frustrating because Judge Gray was in a position to offer something that few authors in the area can provide: information on what members of the judiciary think about the war on drugs. The book does contain some wonderful quotes from federal and state judges on the subject, drawn from an informal survey conducted by U.S. District Court judge Robert Sweet. These marvelous quotes are one of the best reasons to read the book. For example, federal magistrate judge William F. Sanderson Jr. of Dallas, Texas, is quoted as follows: “I have served as a magistrate judge for more than 19 years. During that period I have issued hundreds of drug-offense search and arrest warrants. As a matter of personal curiosity I have asked the affiant DEA agents the question: ‘Are we winning the war on drugs?’ To this date I have never received an affirmative answer” (p. 48). Such material—firsthand accounts of the judges’ opinions and how they have come to form those opinions—is tremendous stuff. Given its fascination, Judge Gray’s failure to include even more of it, because of space limitations (p. 2), is disappointing.

A second problem is that Judge Gray considers drug policy in a vacuum, without attempting to situate it in a broader context. Drug policy does raise critically important questions about civil liberties, but so do many other government policies. The Internal Revenue Service, for example, has a well-documented history of rights violations in enforcing the tax laws, and the Bureau of Alcohol, Tobacco, and Firearms has a similar history in connection with its enforcement of gun laws.

The federal and state governments’ violations of rights in connection with drug policy differ in volume (perhaps) but not in character from their violations of rights in connection with tax laws and gun laws. Because Judge Gray does not offer a rights-based analysis of the impact of antidrug laws, however, his account offers no means of taking a consistent approach to the issue. Without explicitly identifying his account as merely a utilitarian analysis of drug policy, he finds prohibition wanting merely because it is unsuccessful.

Accounts of the costs of drug prohibition that do not consider broader issues may have value, of course. Judge Gray might convince a reader who does not accept broader libertarian values, for example, whereas Milton Friedman (one of the people to whom Gray dedicates the book) might not. Still, the absence of an overarching framework leaves the book incomplete.

The third problem lies in Judge Gray’s solution to the drug issue. After spending the first half of the book documenting the problems of enforcing drug prohibition, he turns to solutions, concluding that “deprofitization” should be brought about through a system of “regulated distribution.” He bases his solution on the (correct) statement that “it is much easier to control, regulate, and police a legal market than an illegal one” (p. 222).

We do not normally observe regulated markets being “deprofitized”; rather, they are generally quite profitable. In the legal but highly regulated tobacco and alcohol markets, for example, firms earn profits. Regulated firms tend, however, not to exhibit much entrepreneurial spirit. They do not innovate as much as firms in unregulated markets, but they do invest enormous amounts in influencing their regulators. Is this model the one we should follow with respect to currently illegal drugs?

To answer that question requires thinking about what the problems of drug use are. Some drug users go on to harm third parties while under the influence of drugs, just as some alcohol drinkers do. Well-established principles of tort and criminal law are available to deal with such harms. How might a legal drug market respond to those principles? First, we might expect to see advertising for responsible drug use, just as we do now for alcohol. Second, drug manufacturers will have an incentive to invest in developing drugs that provide a shorter-term high and a lesser risk of impairment for social use. Third, vendors of drugs will have an incentive (fear of lawsuits) to ensure that their patrons behaved safely. Compare the foregoing hypothetical scenario to the present situation: drug users seek long-lasting highs because purchasing drugs is dangerous and possession of large quantities by weight increases the penalties. Drug dealers have no incentive to have anything to do with their clients and seek to minimize the amount of contact so as to reduce the chance of capture. Drug manufacturers cannot legally advertise. The problem is not that any of the participants in the drug industry makes profits, but that they are prevented from participating in the market and legal system.

In sum, Judge Gray’s book is an interesting, well-written, and lively account of the costs of drug prohibition. It should not be the only book someone reads on the subject, however, although it is a reasonable introduction to the general subject. Those deeply interested in the subject will want to read it mainly for the marvelous quotes from judges and for Judge Gray’s own comments on the evolution of his understanding.