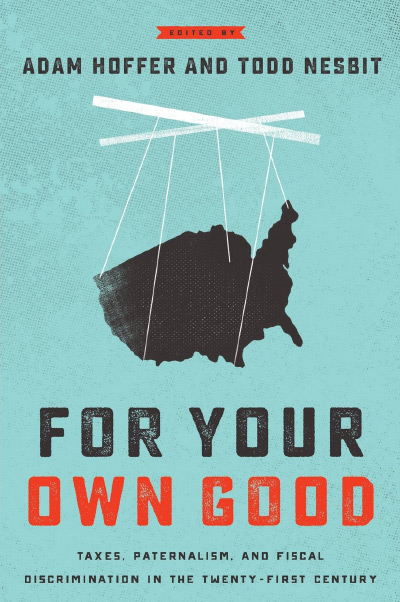 For Your Own Good
Taxes, Paternalism, and Fiscal Discrimination in the Twenty-First Century
Edited by Adam J. Hoffer and Todd Nesbit
Kindle Paperback
This book review is a web exclusive for the Fall 2019 issue of The Independent Review.

In this volume Adam Hoffer and Todd Nesbit compile a range of research from scholars who offer an array of both theoretical and empirical research on the ways in which governments selectively tax some groups rather than others. The key strength of this volume is its concise yet well researched reviews of different issues in selective taxation.

In a broader sense, this volume is the spiritual successor to William Shughart’s edited volume Taxing Choice: The Predatory Politics of Fiscal Discrimination (New York: Transaction Publishers for the Independent Institute, 1997). Indeed, the authors describe how they “started with the table of contents from Taxing Choice when first sketching the preliminary outline of this book” (pp. x-xi).

But this volume is not merely a reprint of Taxing Choice with new data; it provides numerous and varied policy options within each chapter and at the conclusion of the volume. This work also adds new appraisals of types of selective taxation that did not yet exist like plastic bag taxes—or were not covered by Taxing Choice, such as gambling taxes.

The book’s five parts are organized thematically. After a brief introduction, Part 1 seeks to “Establish the Foundation”—as the subtitle promises. Chapters discuss the federal history, normative theory, and economic thought concerning selective taxation. William Shughart launches the part with a concise and clear overview of federal selective consumption taxes from colonial times until the present day. The second and third chapters pivot toward normative discussions of selective taxation and are especially powerful when read back to back. In chapter two, Justin Ross explains why the case for selective taxation must be strong in order for it to be valid, and in chapter three Adam Hoffer and William Shughart critique the many justifications offered in support of selective taxation.

I suspect it is no accident that Richard Wagner’s chapter concludes Part 1. It is a wonderful bridge to Part 2. His chapter acts as a kind of history of economic thought of the taxation literature. Wagner categorizes the economic work on taxation into two camps; one is a “servant of political statecraft,” and another “would seek to study the observed organizational patterns that emerge out of political activity” (p. 77). Part two contains five chapters that broadly show how the types of taxes we get through the political process are the result of the politics of their creation. All five chapters (and the rest of the volume) fits within Wagner’s second and preferred camp of public finance scholarship.

In the fifth chapter, Randall G. Holcombe describes the many different taxes introduced by the Affordable Care Act and how they were sold to the American public. While the recentness of the story and the section covering Jonathan Gruber’s infamous comments (p. 101) may be familiar to many, Holcombe’s significant achievement is to present the various complicated taxes in a digestible manner with explanations of why those forms of taxes were politically chosen instead of alternatives.

Chapters six and seven provide empirical evaluations of effects of tax policy choices and explain how they influence political behavior. First, George Crowley and Adam Hoffer assess the impacts of earmarks on public budgets finding that “(1) most earmarks are ineffective at increasing spending on their targeted expenditure category, and (2) most earmarks that fail to stick are in fact very effective at increasing overall government size and spending on other categories unrelated to their intended target” (p. 140). Todd Nesbit then describes how excise taxes can result in quality substitution if they are designed as per unit instead of ad valorem taxes and that this quality substitution induces lobbying.

Chapter eight, by Bruce Benson and Brian Meehan, showcases the evolution of federal drug policy from its origins in a 1914 tax law to today where civil asset forfeiture acts as an earmarked tax for police forces. It is hard to read chapter eight without some sort of emotional response as it is riddled with small anecdotes illustrating how the tragic sets of policies lock multitudes away in prison and permits the legal theft of citizens’ assets.

In the last chapter to Part 2, Robert Lawson’s triumph is to provide the clearest explanation of tax incidence I have ever seen. This chapter achieves such a feat by way of an example: the Ohio Supreme Court did not treat gross receipts taxation and sales taxation equally even though they are economically equivalent.

Chapters ten, eleven, and twelve in Part 3 discuss how the states and localities distort their taxing system for economic and development tax incentives, the creation of sports stadiums, and public pension systems, respectively. First, Peter Calcagno and Frank Hefner provide a wide overview of the literature on economic development and tax incentives arguing that they are ineffective, result in massive amounts of rent seeking, crowd out public expenditures, and lead to corruption. Next, Dennis Coates and Craig Depken describe the types of taxes (both general and selective), bond guarantees, and the incidence of the different taxation schemes funding the construction of sports stadiums. After which, Thad Calabrese explores the political economy of public pensions and argues that as the growth of unfunded public pension liabilities mounts, cash strapped states will add selective taxes and fees to fund public pensions as has already occurred in Pennsylvania and Illinois.

J. R. Clark and Dwight R. Lee conclude Part 3 with a radical reform proposal in which “all tax revenue would be raised in the states, with each state required to transfer a uniform percentage of its revenue—say, 35 percent—to the federal government” (p. 291). While some of Clark and Lee’s arguments are more convincing than others, they certainly provide an interesting proposal worthy of discussion.

Part 4 returns to the type of selective taxation that economists tend to presume is justified: taxation meant to correct behavior. Chapters fourteen through seventeen consider the internalities of sugary diets, the illicit trade in cigarettes brought about by the extremely high unit tobacco taxes, the banning or taxing of plastic bags meant to limit plastics pollution, and the taxation of gambling. Michael Marlow and Sherzod Abdukadirov argue that the recent government interventions to curb sugary diets in order to tackle obesity is based on faulty premises, lead to unintended consequences and rent seeking, and are not effective. I found their review demonstrating that obese people have the information on the costs of obesity particularly strong and intriguing (pp. 309–310). Michael Lafaive argues that cigarette taxes have gotten so high that they de-facto create prohibition attendant with its problems—violence, public corruption, and adulteration of cigarettes. The majority of E. Frank Stephenson’s chapter undercuts the environmental rationales for plastic bag bans and taxes by quoting lesser discussed facts such as “reusable [cloth] bags need to be used about 130 times to be carbon equivalent with single-use plastic bags” (p. 355). Douglas Walker and Collin Hodges conclude Part 4 by providing an introduction and overview of the regulation and taxation of the United States gambling industry.

The final part titled “Evaluating and Prescribing Better Tax Policy” contains three chapters. The first chapter by Russel Sobel and Joshua Hall evaluates tax policy; while the other two chapters prescribe better policy. Sobel and Hall build a paternalism ranking of the fifty states with a methodology similar to the economic freedom of the world database. Matthew Mitchell’s chapter is a primer on political action to overcome special interests. Mitchell recounts the standard reasons why special interests have strategic advantages that result in them normally winning, but provides what he believes are the relevant factors when special interests lose; namely, 1) ideas, 2) institutions, 3) grand bargains, 4) good leaders, 5) opposing different special interests, 6) crises, and 7) permission-less innovation (pp. 408–409). In a fitting conclusion to the part and the volume, Adam Hoffer and Todd Nesbit summarize the findings of the five parts and provide some first and second best tax policy advice. Under first best policy, they suggest eliminating selective taxes, limiting government’s power to tax, and making taxation more transparent (p. 433). Their second-best guidelines include: minimizing selective taxation, using broader taxation, limiting new expenditures and expansions, using subsides instead of taxes, and making tax decisions localized (pp. 435–437).

I began this review by discussing the volume’s similarities to Taxing Choice. There is another level on which this book could easily become its true spiritual successor. Both editors describe discovering Taxing Choice while learning economics, and how it greatly influenced their subsequent careers (p. ix–x). It is easy to see how parts of their book could be added to the syllabi of many different economics courses and would similarly light a spark within a new generation of economists.