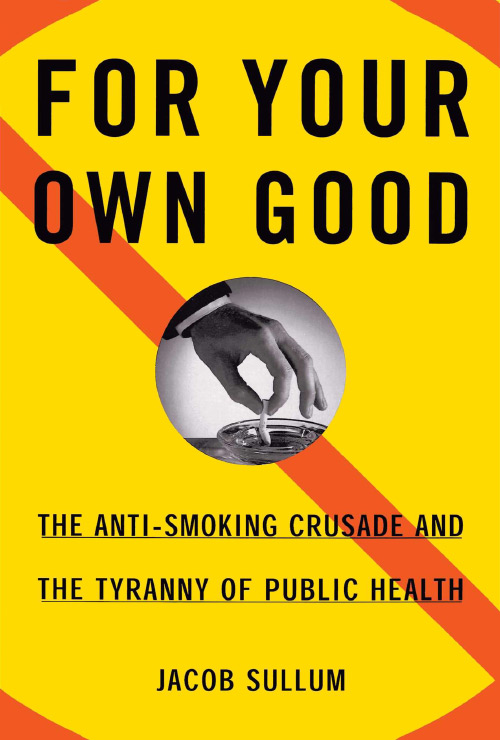 For Your Own Good
The Anti-Smoking Crusade and the Tyranny of Public Health
Jacob Sullum
Hardcover Paperback Mass Market Paperback
This book review appeared in the Winter 1998/99 issue of The Independent Review.

In case you haven’t heard, the information economy has collapsed. It came into being sometime in the mid-1990s, showed enormous promise, then collapsed in 2001. Fortunately, however, there is still hope. In Digital Phoenix, Bruce Abramson looks at the now moribund information economy, offers his diagnosis of the cause of its decline, and proposes a cure that will allow it to prosper anew.

According to Abramson, the United States suffered two important and mutually reinforcing public-policy failures in the 1990s: the executive and judicial branches’ failure to bring Microsoft to heel, and the legislative and judicial branches’ failure to give us intellectual property law that strikes the right balance between creative freedom and incentives to create. These failures allowed predictable self-interested behavior (sometimes abusive, sometimes not) to distort the operation of markets, causing them to fail, too. When these failures denied investors and entrepreneurs the benefits they had banked on, the result was the collapse of the information economy.

Readers might reasonably ask whether anything that might be called the information economy actually collapsed. Because Digital Phoenix is essentially data free, we have to look elsewhere for answers. The North American Industrial Classification System (NAICS) provides a standard for aggregating business data into industries. NAICS group 51, information industries, includes publishing (books, newspapers, databases, and software); motion picture and sound recordings; broadcasting; Internet publishing; telecommunications; and Internet service providers, search portals, and data processing. Bureau of Economic Analysis data for NAICS 51 show growth in nominal value added for every year from 1997 to 2004. Growth does slow from 9.7 percent in 1997 and 15 percent in 1998 to 4 percent in both 1999 and 2000, and then to 1.2 percent in 2002 and 1.6 percent in 2003, before recovering to 9.6 percent in 2004 (http://www.bea.gov/bea/industry/gpotables). These data indicate a slump, but hardly a collapse. Of course, Abramson might prefer a different designation of the information economy, but he doesn’t tell us what it would be. His discussions include software, Internet services, telecommunications, movies, and sound recordings, so the NAICS group 51 designation looks pretty close.

Some things did collapse, of course. The stock market fell, and that fall in itself amounted to a substantial decline in household wealth. Some of that fall had to do with the outbreak of war, some with fraud, and some with the dot.com implosion. But the collapse of a number of wildly inflated stocks is the not same as a decline in the real economy, nor can it justify Abramson’s broad policy prescriptions, including calls for significant weakening of intellectual property protection, tougher antitrust enforcement, and greater government involvement in the provision of infrastructure. Each of these prescriptions might be defended on its own merits, but there is no evidence of a widespread economic collapse that might justify them or any demonstration of profound failures in current institutions.

Abramson’s explanation for the financial blowout is that funds were misdirected in search of “the next Microsoft.” The error, he claims, is that dot.com investors placed their faith in network effects—increasing returns in consumption—while ignoring the true requirement for extraordinary profitability in information industries—“lock-in”—something that economists and market analysts also missed. Microsoft’s incredible profitability, according to Abramson, was due to lock-in, not to network effects alone.

It is more accurate to say that at the onset of the dot.com boom, economists and market analysts were obsessed with lock-in. Economists such as Paul David and Brian Arthur, both cited in Digital Phoenix, argued that in industries that exhibit increasing returns, inferior technologies can become entrenched—locked in—by minor events such as a head start or a sponsor’s fortunate strategic move. Much of the debate that ensued concerned whether lock-in theories were robust and whether the claims of real-world lock-in were correct. Stan Liebowitz and I were among the few participants on the negative side of that debate, arguing that lock-in theories do not survive removal from the abstract worlds in which they are conceived and that there is little or no empirical support for these theories (Winners, Losers, and Microsoft: Competition and Antitrust in the High Technology [Oakland, Calif.: The Independent Institute, 1999]). Nevertheless, models of lock-in were quite the fashion in economics. That enthusiasm carried over to the business literature, with Brian Arthur among the most active promoters.

The economic story Arthur and others offered was that network effects, which are characteristic of high-technology industries, beget lock-in. Translated to business strategy, the orthodoxy begat an inordinate faith in first-mover advantages. Firms were advised to be first at all costs. Lock-in had everything to do with this orthodoxy. Against this view, Liebowitz, my sometime coauthor, argues that many of the dot.coms that were so generously funded in search of lock-in were just not well suited to the Internet (Rethinking the Digital Economy [New York: Amacom, 2002]). Never mind lock-in, companies such as Pets.com and Toys.com didn’t even exhibit network effects. Lock-in was sought; it just wasn’t found.

In much of Digital Phoenix, Abramson builds on what he calls “New Channel thinking” (p. 12), which, he says, must replace the “New World thinking” that dominated the first phase of Internet development. New World thinking held that “the economic laws that govern the physical world do not apply to the Internet” (p. 9). New Channel thinking, in contrast, holds more modestly that the Internet lowers the cost of communication, altering the cost of some kinds of transactions. To establish the reach of this new way of thinking, Abramson invokes Ronald Coase’s work, which establishes the central role of transactions costs in the organization of economic institutions.

This objection might seem just a quibble over economists’ jargon, a shibboleth to protect our turf, except that Abramson’s assertion that IP revenues are no different from transactions costs (which in turn are no different from transportation costs) is central to his argument for IP reform. The New Channel, Abramson argues repeatedly, is a threat to the transactions cost of the music and motion picture industries. He repeatedly denigrates these industries’ defense of copyrights as simply a defense of their transactions costs, a defense of an obsolete way of doing business. Thus, the file-sharing battle is a matter of good versus evil: “Technologists gave consumers new alternatives, economic incentives encouraged them to take them, and the traditional distributors of the music business tried to use IP law to reimpose the transactions costs that were once inherent in copying and distributing music” (pp. 222–23).

This claim is nonsense. If it costs a great deal for a producer to deliver a good, that cost reduces the amount he can capture from the amount that consumers are willing to pay. If he can eliminate such a cost, he would be better off. What the movie and recording industries are defending is not their transactions costs, but the returns to investment in creative work. This distinction is essential. Eliminating transactions costs makes both creators and consumers better off. Eliminating royalties reduces creative activity.

This clarification, however, does not settle the issue completely. It does not imply that entertainment producers should win on every front or that we have struck just the right balance between protecting creative works and giving latitude to new technology. Nonetheless, conflating transactions costs and royalties does not help us resolve the difficult issues that now surround intellectual property.

Entertainment distributors are not the only villains in Abramson’s world. As noted earlier, Microsoft is held up for considerable opprobrium. The longest chapter in the book covers the Microsoft trial. Abramson offers Judge Jackson’s endorsement of the government’s case as proof of Microsoft’s considerable guilt, but dismisses or disparages the unanimous finding of the D.C. Circuit Court of Appeals. For example, on the court’s treatment of the tying charge, Abramson writes, “[T]hey decided to change the rules of legal analysis. Then they concluded that since they had just made up a new rule, Jackson couldn’t possibly have followed it correctly” (p. 160).

If the villains in Abramson’s morality play are clear enough, so are the heroes. They include the technologists, in particular open-source programmers who toil away, willing to work for little more than recognition and the pride of accomplishment. They are joined by those who carry the fight for unlimited file sharing.

Digital Phoenix advocates broad policy reforms, but unfortunately offers few specifics. Antitrust enforcement should be tough, but not so tough as to deter good competitive behavior. Intellectual property law should be reformed to give new technologies a freer hand, but it must provide adequate compensation for creative work. In places, Abramson acknowledges that these goals might involve trade-offs, but that possibility does not interfere with his veiled utopian stance.

The veil gives way, however, in an over-the-top final chapter, in which Abramson promises that enlightened information-economy policy and reduced transactions costs will set us free: “Freedom, individual rights and responsibilities, equal opportunity and personal choice are network goods. The larger our free world network, the more valuable our membership.” The period preceding the collapse is held up as our halcyon days: “America in the late 1990’s got a rare glimpse of peace, prosperity, and hope. To those who complain that we elevated hope over reason, I must ask: What’s wrong with a little hope?” (p. 306, emphasis in original). Oh lost, our hope, dashed by bad IP law.

The Internet era has brought the use of five-star rating scales to everything, and clearly this book should get some stars. Those who draw their life force from hating Microsoft, applauding open source, and looking to share another gigabyte will give it five stars. For the rest of us, Abramson provides a readable articulation of the techno-utopian worldview. For that, we give it one star.