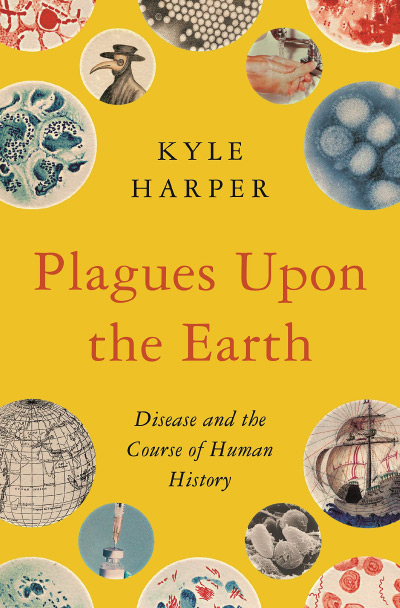 Plagues upon the Earth
Disease and the Course of Human History
By Kyle Harper
Kindle Hardcover Audiobook
This book review is a web exclusive for the Spring 2022 issue of The Independent Review.

As a child, I used to wonder why my grandfather covered his glass of water with a napkin, even when we were inside. He grew up in a rural Armenian village at a time when a common housefly might have carried a fatal disease. Developing such a strict habit was a matter of life and death less than a century ago, and it remains so in many parts of the world today.

The impact of disease has left a serious impression on human habits and psyche. Four-poster beds with curtains hung all around used to be for protection from mosquitoes, but the design has survived to adorn young girls’ bedrooms today (see Eric Jones. 2003. The European Miracle: Environments, Economies and Geopolitics in the History of Europe and Asia. Cambridge: Cambridge University Press, p. 73). Kyle Harper’s Plagues Upon the Earth argues that diseases have profoundly shaped human history, while recursively humans have shaped the history of disease. In the grand human story, diseases should be counted as protagonists rather than simple obstacles that we’ve overcome.

Each disease comes with a human response. But each human response comes along with a whole host of other technological and political developments that may make us vulnerable to new diseases. The back and forth makes the future of our relationship with disease less secure than the image we may have been sold, despite the great leaps of medical technology in recent centuries.

To investigate the pre-history of disease, Harper uses two tools which he dubs “tree thinking” and “time travel.” Tree thinking (phylogenetics) is the ability to estimate the time and place of a disease’s origin by exploiting our knowledge about its common ancestors and the rate of genetic mutation (pp. 44–46). Time travel (paleogenomics) is the use of bacterial DNA that is found in the fossilized remains of other organisms (pp. 46–48). Harper splits the book into four parts, each dealing with a unique historical epoch and the diseases associated with it. These are (1) the use of fire, (2) agriculture, (3) New World conquests, and (4) the use of fossil fuels.

It’s not uncommon to hear laments that agriculture introduced a majority of human social and biological ailments. Harper, however, draws the origin of diseases that responded to human technology much further back—to the invention of fire. Unlike most other mammals we have externalized most of our digestive process by cooking our food, something only available with the invention of fire. The energy that otherwise would have gone to digestion now goes to our brains and fuels our superior cognition (p. 65).

Unfortunately, our big brains came with a tradeoff that made us more vulnerable to disease. Schistosomes are parasitic worms who developed a survival strategy that preys uniquely on the weak human digestive system. Schistosomiasis still infects two to four hundred million people today (pp. 69–71). In the Pleistocene (the era before the development of agriculture), diseases needed to either establish long-lasting infections, rely on animal reservoirs or find an efficient transmission mechanism for the low-density human population (p. 91). As history slogged forward, some diseases developed the proper strategies, but humans did a lot of work to help them along the way.

Agriculture, essentially a technology that turns sunlight into human sustenance, provided an irresistible stability to the hunting and gathering of the Pleistocene era (p. 124). The stability that came with farming however, made humans an easy target for a precise strike by a new predator—the common housefly, Musca Domestica, bred from concentrated pockets of human feces that were reliably available with the stationary agricultural lifestyle. Additionally, houseflies like the same sweet foods that we do, and they appreciate the great job we do at gathering them food (pp. 135–38). Flies themselves are usually just a nuisance, but the bacteria that they spread can do real damage. The human population was growing in urban centers and looking ever more enticing to new disease.

At the same time, cities also helped provide the means to stop disease. Sewers, aqueducts, and rudimentary sanitary laws were public goods only possible with a large, coordinated population (p. 173). The diseases that grew during this period included tuberculosis and malaria, perhaps overall the two most destructive diseases to humanity. The most famous and destructive plague was of course the Black Death, whose spread appeared to mirror political and economic integration (p. 234). Agriculture turned humanity from a moving target to a stable target, but also gave us the means to fight back.

The discovery of the New World introduced a new source of disruption to the way humans interact with diseases. Two completely different populations with different sets of immunities came into contact and unleashed some of the worst diseases known to mankind such as smallpox, typhoid, and yellow fever (p. 270). The economic decisions made by colonizers only exacerbated the problem of disease. Sugar demanded an incredibly labor-intensive form of agriculture that motivated the slave trade. Stowed away with the slaves were a myriad of deadly diseases that wreaked havoc on the American population as well as both slave and master (pp. 305–6). Eighty percent of the British soldiers in Jamaica died in the first five years of occupation (p. 303). The diseases arguably helped several revolutions and slave revolts to succeed (p. 328). The last few centuries have been struck by the paradox of progress. Economic growth comes along with population growth and the new diseases which exploit higher density.

Plagues upon the Earth does not provide a blow-by-blow description of the conflict between humans and disease and the way they respond to each other. The book is only partially organized chronologically. Each section discusses diseases that were introduced in each era but proceeds to tell the entire history of that disease up to the present. Overall, the story comes out one-sided. Most of the focus is on the diseases, and their parasitic strategies that have taken advantage of various human environments. To tell the whole evolutionary narrative, we need both sides of the story. The American philosopher William James wrote an essay criticizing the way that Herbert Spencer used evolution to interpret human history (William James. 1880. “Great Men and their Environment.” Atlantic Monthly Vol. 46. Jan 1: 441). Spencer’s interpretation of evolution was that the environment strictly dictated which organisms survived and thus who could pass on their genes. He believed that culture, religion, and politics all have deep, strictly determined, geographic roots. But James pointed out that Darwin’s theory relies on two interacting elements: first, the environment which selects for sets of traits, and second, the independent method of variation that selects mutations. Evolutionary arguments are often read: “The environment selects for X; therefore X was determined by the environment.” But that’s not true. There are many different mutations that might satisfy the environment and the fact that variation in mutations is independent of the environment means that the future is not strictly predicted by the environment. To tell the full story, you can’t just talk about the environment, you have to talk about the dance between mutation and environment.

Both diseases and humanity are responding to one another in ways that are not strictly determined by the environment. Jared Diamond’s Guns, Germs, and Steel (2003. New York: W. W. Norton. P. 496) is the canonical book of geographic determinism. Where does Harper’s book lie on the determinism issue? There are some missed opportunities to discuss the critical choices along the way that lead to different long-run effects of plagues. For example, Remi Jedwab, Noel Johnson, and Mark Koyama (Forthcoming. “The Economic Impact of the Black Death.” Journal of Economic Literature) discuss the many debated effects that the Black Death had upon the political structure of Europe. Though the plague had similar mortality rates in urban and rural areas, it drove many rural workers to cities in search of higher wages, potentially tipping the political balance in favor of the towns over the lords. Such a major political shift had implications in the long run for how Europe was able to respond to disease. The authors also note that the Black Death is associated with the demise of serfdom and eventually the rise of the nation-state. The ability for large-scale public-health coordination was then perhaps ironically enabled by the effects the plague had on European populations. Further questions can be raised about why the plague had the liberating effect in Europe, but not in other parts of Eurasia.

In short, Plagues upon the Earth spends too much time on the disease side of the causal spiral, and how various bacteria adapted to the human environment. To understand how disease shaped the course of human history, we need more on the human side of the spiral. The book provides the very clear case that disease responds to human development, making each one of our supposedly final strategies to eradicate disease more precarious. Perhaps, a disease could develop a strategy that thrives peculiarly off stay-at-home lockdowns. With such a response to a disease being hotly debated, the book would have benefited from a discussion of how responses to disease have gone wrong. Harper’s book usually treats human ingenuity as the B-plot to the story of how viruses adapt to us, relegating the long-term social dynamics of disease to the corners of each chapter.