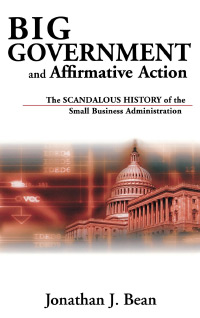 Big Government and Affirmative Action
The Scandalous History of the Small Business Administration
Jonathan J. Bean
Kindle Hardcover
This book review appeared in the Winter 2002/03 issue of The Independent Review.

In Big Government and Affirmative Action, Jonathan J. Bean tells the story of the role of small business in the growth of the American state. This compact account is a fine sequel to the author’s award-winning Beyond the Broker State: A History of the Federal Government’s Policies Toward Small Business, 1936–61 (Chapel Hill: University of North Carolina Press, 1996). It describes the process by which interest-group actors (business groups, congressional committee, and bureaucrats) operate to build nearly indestructible government programs. In addition, the book adds an important dimension to the story of the development of affirmative action. In manifold ways, congressional and bureaucratic policy toward “disadvantaged” businesses adumbrated later policy toward disadvantaged minorities and myriad other victim groups, and the Small Business Administration (SBA) itself took up minority preferences as its raison d’être.

The most striking feature of the SBA story is that the agency did not come to life as the result of pressure from the small-business lobby. There has never been a satisfactory definition of small business, and the closest things to a small-business lobby actually opposed government attempts to help it. The SBA ignored the smallest businesses. The agency does not fit the “iron triangle” model that political scientists have used to describe how Congress, bureaucrats, and business lobbies create and maintain regulatory agencies. It has been almost entirely a “creature of Congress,” especially of certain committees, whose members appealed to the myth of independent enterprise as a means of justifying the distribution of favors to constituents. The federal government has not acted as a “broker” among interest groups, but instead has pursued its own interests.

The SBA quickly became a patronage machine for both Republicans (who used it to deflect criticism that they were beholden to “big” business) and Democrats (who used it as proof that they were not “antibusiness”), so it is not surprising that it became embroiled in repeated corruption scandals. Bean points out that both 1996 presidential candidates were tainted by SBA-related improprieties and that the Whitewater investigation and ultimately the Clinton impeachment grew out of an SBA minority-set-aside scam. Bean pulls no punches and is nonpartisan, as his account of the Reagan-era Wedtech scandal shows.

Bean’s account illustrates how the Eisenhower administration’s “New Republicanism” created the SBA, and it confirms the historiographical revisionists who depict Richard Nixon as a big-government liberal. Even more striking is how the Reagan administration preserved the SBA and augmented the system of minority set-asides to which the agency had committed itself. The agency survived David Stockman’s attempt to abolish it, becoming a prime example of what Stockman called “the triumph of politics.” “If programs like these can’t be cut,” Reagan predicted in 1985, “we might as well give up hope of ever getting government spending under control” (qtd. on p. 120). The SBA indeed provides “a valuable case study in the political bankruptcy of the ‘Reagan Revolution’” and the “superficial nature of congressional conservatism” (p. 125). After reading this tale of bureaucratic immortality, one has to smile at the optimism of Bean’s final question:“Leviathan ruled the twentieth century. Perhaps the twenty-first belongs to the Lilliputians?” (p. 136).

The SBA illustrates the plethora of pathologies associated with the centralized bureaucratic state. It shows the effects of the reckless delegation of legislative power that began with the New Deal. Congress enacts laws aimed at a vague category, such as “small” or “disadvantaged” business, and leaves it to the bureaucrats to give these laws practical effect. This procedure can be seen in SBA’s predecessors (the antitrust statutes that require “competition”) and successors (civil rights laws that prohibit “discrimination”) that use equally ill-defined terms. When the SBA began to give preferences to “minorities,” it faced the inescapable problem of defining who qualified as a minority, and it invented “a method of visual observation” (p. 44) to fill the need. The system of racial preferences exacerbated identity politics, with black spokesmen becoming upset when a Mexican American was appointed agency chief in 1969. As Bean observes, “Double standards in the distribution of government assistance produced double standards in law enforcement and [in] the administration of this politically sensitive program” (p. 87). Here we see what Deepak Lal calls “the dirigiste dogma” (Against Dirigisme: The Case for Unshackling Economic Markets [San Francisco: ICS, 1994]) and what M. Stanton Evans calls “the phenomenon of self-generating interventions” whereby “every problem brought forward as a reason for further government intervention is the result of a prior intervention” (“The Liberal Twilight,” Imprimis 5 [1976]).

Bean has done a model job in producing a smoothly written and often amusing policy history, and the University Press of Kentucky has done excellent work in editing and publishing it.