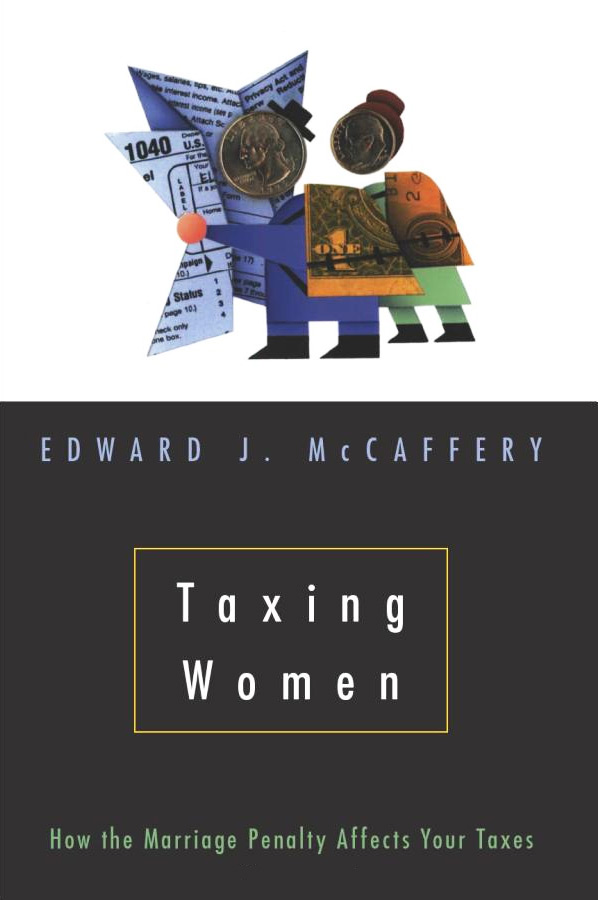 In the first several chapters, Edward J. McCaffery describes in some detail the evolution of the current tax system with respect to secondary wage earners and examines the consequence of the system as it exists today for female labor supply. These chapters are the factual ones but are made more interesting by evidence from real-world families. The message is straightforward. The tax system was designed for the Leave it to Beaver households of yesteryear. With number after number and case after case, McCaffery illustrates the distortions of the tax system that encourage women as secondary wage earners to choose household production over market production.

Although McCaffery focuses primarily on the income tax, he supports his argument that the tax system is biased against women who prefer market production with evidence of the additional distortions introduced by Social Security. The evidence in these chapters is neither new nor unique to McCaffery, but the detail and the consistent focus on the effects on secondary wage earners sharpen the images beyond those found in the more academically oriented literature.

After the accounting chapters comes the economics discussion. Clearly McCaffery has studied traditional, normative tax theory. Again, although the lesson is not novel, his approach is. He builds on the following observation: empirical evidence confirms that women’s labor-supply decisions are more sensitive to changes in wages—in the economist’s terms, their labor supply is more “elastic”—than men’s. McCaffery correctly develops the implications stemming from this fact. Normative tax theory establishes that we maximize aggregate taxpayer well-being by minimizing the distortions caused by taxes. As a consequence, we should tax the income from men’s labor at relatively higher rates than that from women’s labor, because the resulting labor-market distortions would thereby be lessened.

In a pleasantly feminist tone, McCaffery argues that women ultimately bear a disproportionate burden of the tax as well as a disproportionate burden of all household production activities. Child care is one example. Typically, either a woman directly bears the burden of child care or indirectly bears the burden because arranging for care falls on her shoulders. Other household activities can be described similarly. This reviewer would not disagree with McCaffery on this point.

The final questions considered by McCaffery are simultaneously the most interesting, the most important, and the ones that leave me most dissatisfied with his analysis. He argues that the tax policy is wrong whether viewed from an accounting perspective or from an economics perspective. Agreed. Moreover, he views the tax system as one that has arisen because of a political motive: keep her barefoot and down on the farm. McCaffery argues that this old motive has not disappeared but is alive and well in our political system as manifest by tax policy that has changed very little in fundamental ways throughout history.

McCaffery works explicitly through Newt Gingrich’s Contract with America to illustrate that the fundamental premise of man as head of the household pervades the entire Contract. Again, this reviewer has few problems with his description. But in this section the analysis becomes vague and the prescriptions for change perhaps misdirected.

In particular, the criticism of the conservative movement becomes an attack on free-market economics. The implication, though not explicitly stated, is that the market gave us this system of taxation. Two problems immediately become apparent. Many economists who understand and value the market as a mechanism for coordinating the allocation and distribution of resources do not support the Gingrich Contract. Clearly, the Contract is a political document, by its very nature intended to foster the redistribution of resources from one group to another. As is typical in politics, this process is not necessarily a positive-sum game for all.

In McCaffery’s view, leaving the tax system as it currently exists is tantamount to laissez-faire. His analogy is that free-market economists think the market will eliminate discrimination and therefore eliminate the tax distortions if the current tax system is left in place. But the analogy is not apt. The market did not generate the current tax system; generations of politicians did. Although McCaffery is correct in pointing out that the market system is not perfect, he fails to take the next logical step. The government also is not perfect. And the imperfect political system has given us this tax system with its biases against women’s working in the market. The system has continued through liberal and conservative Congresses and administrations and is perfectly predictable when viewed from a political economy perspective. The glass ceiling has been raised much more slowly in political institutions than in private, profit-making firms. Why should we be surprised that the political system, which kept women from voting in national elections until 1920, continues to discourage women from participating in the labor market?

McCaffery, a lawyer, has devoted a great deal of time and effort to learning some accounting and some economics. His failure to appreciate fully the distinction between the market and the government and how they should be viewed by policy makers does not erase the significant contribution his book makes to the subject of taxation. Many women will be indebted to him if his book fosters the reform he seeks of the current tax system. Even without that reform, many of us should send him notes of appreciation. With more men like McCaffery, the laundry and dishes would no longer be women’s work.

Eugenia F. Toma
University of Kentucky
Culture and SocietyEconomyFamilyFederal Tax PolicyGender IssuesGovernment and PoliticsTaxesTaxes and Budget
Subscribe Buy This Issue Get the App