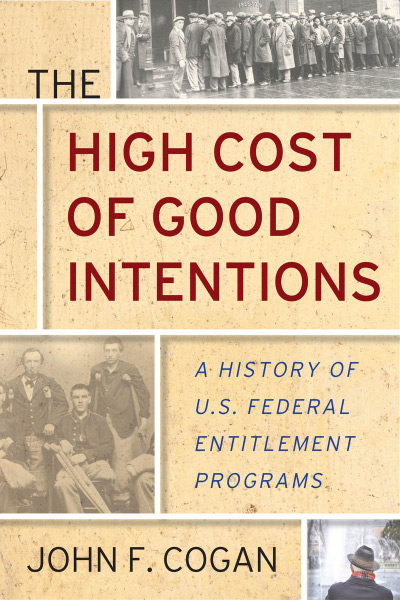 Send a student to the chalkboard and have her illustrate, using Venn diagrams, the universal set of policy positions of former U.S. House Speaker, self-described policy wonk, and Ayn Rand admirer Paul Ryan. Now ask her to do the same for former presidential candidate, current U.S. senator, and self-described “democratic socialist” Bernie Sanders. The intersection of those two sets is not large, but it is not the null set. On one issue, they agree: U.S. federal entitlement programs are, well, off the mark. Paul thinks we spend too much on too many programs; Bernie, not enough on not enough programs.

If one were curious about how this particular topic ended up at the juncture of two such opposing worldviews, one could read nine or ten excellent volumes on the history of specific U.S. federal entitlement programs. (I have in mind, for example, Sylvester Schieber and John Shoven’s thorough, though now a bit dated, book The Real Deal [New Haven, Conn.: Yale University Press, 1999], a detailed account of the past and future prospects of Social Security.) Readers lacking the time or commitment for such an exercise should just read John Cogan’s new book The High Cost of Good Intentions. Cogan offers an excellent, concise history of U.S. federal entitlement programs and summarizes their current states. He manages to do this in 392 pages of densely packed but well-explicated text. The volume is accessible to lay readers as well as to academics and professionals.

After an introductory chapter, Cogan reviews the first U.S. entitlement programs, which, interestingly, antedate the United States itself: military pensions from the Revolutionary War. It is a bigger topic than you might think. Revolutionary War pensions were followed by pensions from the War of 1812, and those were followed by Civil War pensions, which were followed by Spanish American War pensions, and finally the Great War gave us the infamous “bonus” system. It is important to note that these pensions were not retirement pensions for the “regular” army or navy. Rather, they were, at least initially, disability and survivors’ benefits for the men, mostly volunteers, serving in each specific conflict. Once the initial entitlement had been created, Congress proved unable to resist increasing both the coverage and generosity of the post-conflict benefits. A few decades after each war, the pensions became essentially universal old-age retirement plans for the veterans and their survivors. The Civil War pensions eventually proved to be especially costly. On the eve of the country’s entry into World War I, fifty-two years after the guns had gone silent at Appomattox, 20 percent of federal outlays were for Civil War pensions (p. 54).

The Great War generated millions of new claimants. In 1924, following almost 150 years of pressure to deepen and broaden veterans’ benefits and with the costs of the Civil War pensions still hanging over its head, Congress hoped to avoid perpetuating the problem by clearly defining (and limiting the liability of) a future entitlement for World War I veterans. The vets were to receive in 1945 a lump-sum bonus payment based on length of service during the Great War. (Cogan puts the average benefit at a little less than $1,000 [p. 62].) As the Depression worsened, the veterans demanded early payment, and in the summer of 1932 thousands of them, accompanied in many cases by family members, marched on Washington, D.C. Although the protesters were not without support in Congress, President Herbert Hoover refused to be bullied by the ragtag “Bonus Marchers,” and with the D.C. police overwhelmed, Hoover charged U.S. Army chief of staff Douglas MacArthur with maintaining order. MacArthur did more than that; he cleared out the marchers’ camps by unleashing infantry, armor, and cavalry units (yes, the army still had horse troopers in those days), and in the resulting conflict one veteran was killed, and roughly fifty were injured. The optics, as we say today, were not good. A little more than a hundred days later, Franklin Roosevelt crushed Hoover in the Electoral College as badly as MacArthur had crushed the Bonus Marchers.

Lest you think that was the end of the bonus issue, it was not, and this is Cogan’s point in reviewing the pre–New Deal military entitlements in such detail. Four years later, over Roosevelt’s veto, Congress authorized the early payment of the bonuses. The subsequent outlay was, in Cogan’s words, “the largest disbursement of cash to veterans in any single year in U.S. history up to that time” (p. 78). In short, despite being conscious of the long, expensive, contentious history of military pensions, and despite a game effort to avoid similar problems with the World War I veterans, Congress could not credibly commit to holding the fiscal line on entitlements once it created the program.

The New Deal arrived as the bonus fiasco limped to its conclusion, and it was clear from the outset that the incoming Roosevelt administration was going to do something different when it came to public support for the downtrodden. Cogan describes two visions of public assistance that crystalized, in a sense, during the New Deal. One was what we would call straight pay-as-you-go welfare, with the federal government, assisted by the states, replacing the church or other local institutions, religious or otherwise, as the identifier of the worthy poor and the purveyor of the dole. The primary break with the past would be the size of the programs and the federal funding, which came with some federal oversight, the extent of which would be settled in the political arena. The alternative to welfare was the social insurance approach—that is, you contribute something; accounts are kept; and, some day in the future when you need it, you get something in return—a scheme best represented by Social Security, in which the payroll tax, supposedly, funds an old-age pension.

Initially, as measured by funds dispersed at the federal level, welfare was the winning option, but over time social insurance proved easier to sell politically. Of course, Social Security is not social insurance, and it never was. Cogan understands this, and he explains why the payroll tax was just another name for a specific type of income tax. The implication is that the Social Security “Trust Fund” contained no more of a trust or a fund than the Defense Trust Fund or the Justice Trust Fund. The trust-fund accounting was just window dressing for political prevaricators and the dupes who believed them. (Though, curiously, Cogan reports trust-fund balances as if everything he writes about their falsity somehow came from an altogether different volume.)

Another theme that runs through the narrative is the conflict between an entitlement and a gratuity based on the worthiness of the recipient. (Widows and orphans were considered worthy; others not so much.) For centuries, this had been an important distinction in Western civilization. Cogan documents that over time and especially during the late 1960s and early 1970s there emerged a formal movement fighting to convert welfare from a gratuity to an entitlement. To highlight the transition, he cites a New Jersey grand jury that was investigating the state’s Aid to Families with Dependent Children program in the 1950s: “There is no . . . logic, justice, or morality . . . in granting State Welfare funds to a mother who has had two, three, four or even five illegitimate children fathered by two or three different [men]. Immorality, promiscuity, and unwed motherhood seem to be rewarded and encouraged by the easy allowance made upon a simple application of need” (quoted on p. 180). Readers beyond a certain age will recognize this view as mainstream thought from their younger days. Most of the people who still feel that way have given up sharing their views so bluntly, or, at least, they constrain them to Trump rallies and certain Internet web pages. Of course, it is worth noting that the percentage of children born to unwed mothers has increased from less than 10 percent in 1960 to more than 40 percent in recent years. It is also worth noting that trying to engage most people, especially those under a certain age, in a discussion about out-of-wedlock births is akin to engaging them in a discussion about trial by ordeal; the topic is not without interest but largely irrelevant.

The New Deal was followed by President Lyndon Johnson’s Great Society, which was followed by President Richard Nixon’s Second Great Society. The Great Society will be familiar to readers of The Independent Review, but many may not fully appreciate that the Nixon administrations were even more profligate (or, perhaps, humanely generous) than the Johnson administrations. Cogan observes that “inflation-adjusted entitlement expenditures grew 20 percent faster under President Nixon than they had under President Johnson” (p. 262). By the time Nixon fell, all of the major entitlement programs we know today, with the exception of those created by the Affordable Care Act, were more or less in place.

If you are reading The Independent Review, then you know where this road leads, and over the final two chapters Cogan takes readers down that road. The figures on federal entitlement spending are mind numbing because of their sheer magnitude as well as the frequency with which they are cited: nearly $3 trillion; more than 70 percent of federal spending; roughly 14 percent of gross domestic product (p. 381). Cogan suspects he knows what the problem is: “[O]nly 21 percent of entitlement assistance went to alleviating poverty” (p. 382). That is because social insurance is now overwhelmingly the primary source of entitlement spending, and “[o]ver 90 percent of social insurance assistance consists of cash and medical benefits for a single demographic group: those age 65 and older” (p. 382). Maybe both Paul and Bernie are right: we do spend too much on entitlements, but becausewe spend toomuch on the wrong entitlements, we don’t spend enough on the right ones. The American humorist Finley Peter Dunne’s character Mr. Dooley said it best: “One of the strangest things about life is that the poor, who need themoney themost, are the ones that never have it.”