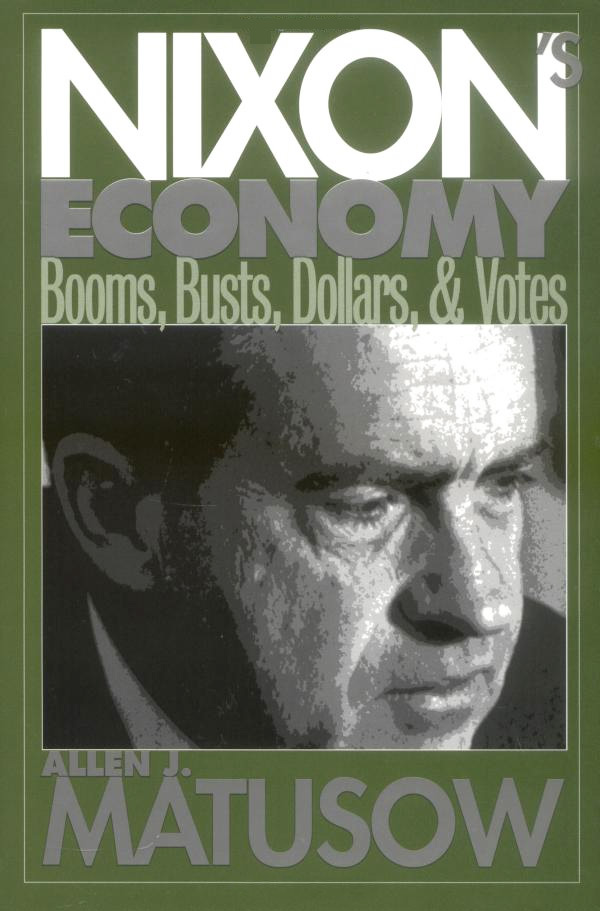 Over the last decade or so, there has been a substantial rethinking of the Nixon presidency. In the aftermath of Watergate, it was impossible to assess Nixon’s actions objectively. But as the years have passed, his failures and successes in foreign policy have been examined more dispassionately, and many accomplishments have been noticed. Until the appearance of Allen Matusow’s new book, however, Nixon’s economic policies had not received a similar reassessment. In a very readable and well researched exploration of Nixon’s economics, Matusow makes a compelling case that Nixon held no principled position whatsoever and that his economic policies were overtly and explicitly driven by his attempts to create a new electoral majority. In view of Nixon’s having thoroughly politicized the economic-policy process for the purpose of vote-seeking, it is not surprising that his policies were responsible for the worst economic retrogression since the Great Depression. The Nixon presidency, as seen through Matusow’s account, becomes an excellent case study in public-choice economics and the failures of interventionism.

Matusow’s book is organized largely in chronological order, beginning with 1969 and roughly treating each succeeding year through 1974 in a separate chapter. In some cases where events warranted separate treatment, he has split years into different subject matter (for example, treating the oil shock in a distinct chapter). The more or less linear structure of the book allows the reader to gain a good sense of how Nixon’s policies developed and changed over time as his political interests and changing circumstances dictated.

Three major strengths of Matusow’s book deserve special mention. First, he has made extensive use of archival materials that were inaccessible until recently. By using the presidential office files, Bob Haldeman’s extensive notes, and the various books and recollections of Nixon’s associates, he has assembled a large amount of material from a variety of sources to document various meetings and discussions in great detail. The result is a very ugly view of the politicization of economic policy that puts one in mind of the old saw about not wanting to know how sausages or laws are made. Nixon’s numerous vices are constantly on display: a hatred of his political enemies and a desire to use his power to attack them; his willingness to discard staff members at a moment’s notice; his virulent anti-Semitism; and his permanent campaign mode (long before Bill Clinton), especially during his first term.

A second strength of the book, of special interest to economists, is Matusow’s careful documentation of the role played by well-known economists in the Nixon administration. Arthur Burns, Herbert Stein, Paul McCracken, Milton Friedman, and others all have starring roles in the drama. Except Friedman, none of them presents an appealing picture. Matusow extensively documents the ways in which Nixon’s economic advisors were quick to sacrifice principles, particularly free-market principles, for political expediency. On a variety of issues, from closing the gold window in 1971, to agricultural policy, to energy policy during 1973 and 1974, economists entrusted with political power turned their back on well-established disciplinary positions in the interest of pleasing their political overseers. Friedman operated differently, largely as an informal advisor. Matusow makes extensive use of Friedman’s Newsweek columns to illustrate the ways in which Nixon’s policies did not correspond with the Friedman’s free-market, monetarist line. Friedman’s reluctance to take a position of power served him, and the nation, well by giving him an independent platform from which to evaluate Nixon’s policies. One of the undercurrents of Matusow’s book is a profound sense of embarrassment about how otherwise competent economists bungled the task of putting their beliefs into practice.

The book’s third strength is Matusow’s use of economics. In more than three hundred pages of analysis of Nixon’s economics, I found very few places where Matusow made an obvious error of theory or history. Perhaps his weakest topic is the budget. He seems to accept the notion that deficit spending is appropriate in times of recession. He also makes a couple of side comments about the deficits of the 1980s that are off the mark. But in most cases he handles the economics nicely, especially in his discussions of inflation, where he keeps the behavior of the money supply always at the forefront, and the energy crisis, where he does a fine job of documenting the various government interventions that precipitated the crisis and the horrendous policy mistakes that exacerbated it. He is particularly hard on Bill Simon, another example of a reasonable man gone astray when entrusted with power. Matusow deserves particular praise for his discussion of Bretton Woods and the gold window, in which he deals with some complicated issues in international monetary economics and does a good job of rendering them comprehensible.

The book’s general theme is that Nixon was driven by his own political calculus. Matusow makes a compelling case that Nixon’s attempt to build a New Majority that was moderate on economic issues but conservative on social and cultural issues was the guiding force of his economic policies: “The zigs and zags of policy gave the appearance of ideological confusion. Politics provided the coherence, and because politics was the point, Nixon cared more about the symbolism of his programhow it played in Peoriathan in actually passing it” (p. 4).

Not long after taking office in 1969, Nixon was already concerned about the effects of the economy on the 1970 congressional election. He wanted to assemble his New Majority as soon as possible and was prepared to use all the tools at his disposal to do so. Matusow documents a conversation between Nixon and George Schultz in the spring of 1970, in which Nixon expressed the hope that Arthur Burns, newly installed as chairman at the Federal Reserve, would loosen up the money supply to boost the economy before the elections. Schultz indicated that Burns “has a way of holding the money supply as hostagesaying that ‘if you don’t behave, I’ll tighten up on money.’” Nixon replied by slapping the table and saying, “When we get through, this Fed won’t be independent if it’s the only thing I do in this office” (p. 62). Later that spring, Nixon was concerned about high meat prices and was trying to force chain stores to lower their prices in time for the election. Having complained to an aide that the chain stores were “primarily dominated by Jewish interests,” Nixon had already instigated an antitrust inquiry when market forces brought meat prices down (p. 66). Not only did he accept that “we are all Keynesians now”; in Nixon’s microeconomic world, “we are all interventionists now.”

Matusow documents the importance of John Connally’s role as secretary of the Treasury. A conservative southern Democrat, Connally embodied Nixon’s economics. He found himself more and more an outsider in his own party and more and more welcome in Nixon’s movement to create a New Majority. Connally had no fixed principles. In his own words, “I can play it round or I can play it flat, just tell me how to play it” (p. 109). He was a central player in the closing of the gold window (opposed, interestingly enough, by Paul Volcker, then an undersecretary at the Treasury) and the point man for Nixon’s broader New Economic Policy in 1971. Always aware of the political implications of any policy moves he made, Connally was the perfect aide for Nixon.

In his discussion of Nixon’s various attempts at price controls, Matusow nicely illustrates the problems of attempting to enforce price and wage controls in a complex economy and details the ways in which the institutions responsible for enforcing the controls both lacked the necessary knowledge to do so with any semblance of economic rationality and were buffeted by the winds of political power. Powerful labor interests received exemptions from the controls, as did certain industries. Clearly, Nixon and his advisors thought that the controls would be worthwhile politically, and they convinced otherwise sensible economists to buy their argument.

Although Matusow does not draw out what I see as the moral of the story, it does not take a very deep reading to see that the mess Nixon created is always a possible, if not a likely, outcome when the state has the power to intervene as Nixon did. The apparatus of state intervention sits ready and waiting for those willing to use it. If it could be used to enhance economic well-being, then concerns might be misplaced. However, given the complexity of that task and the limited ability of state actors to acquire the knowledge necessary to complete it, inevitably the instruments of intervention will be turned to more parochial uses. Such misapplication is even more likely in an era when politicians are permanently campaigning, so that their explicitly stated goal, like Nixon’s, is to get themselves and their party reelected. Matusow has carefully and cogently documented Nixon’s use of the instruments of power in pursuit of his own political goals and illuminated the disastrous results (double-digit inflation and the worst recession since the 1930s, not to mention a legacy of interventionism that has continued to the present) that Nixon’s economics engendered. Matusow’s book, though not couched in such terms, is an excellent case study in public-choice economics and is recommended to students of public choice and recent U.S. economic history.