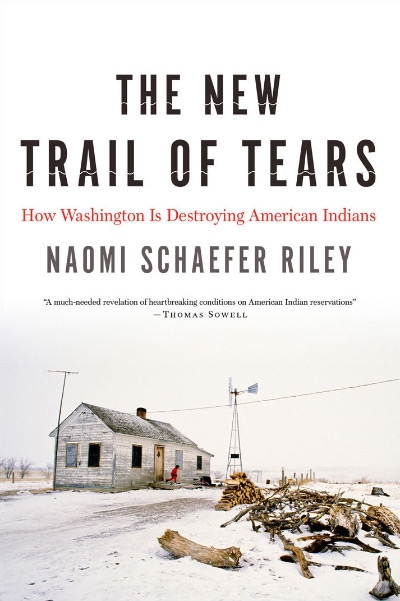 The New Trail of Tears
How Washington Is Destroying American Indians
By Naomi Schaefer Riley
Kindle Hardcover Paperback Audiobook Audio CD
This book review is a web exclusive for the Fall 2022 issue of The Independent Review.

For many Indian reservations, life is characterized by high poverty rates, high crime rates, rampant health problems, poor educational outcomes, and confusion over legal jurisdiction. However, most Americans are not aware of the problems that reservations face. Since many reservations are in remote areas, the social ills are out of sight, out of mind.

In The New Trail of Tears,Naomi Schaefer Riley casts light on what reservation life is really like. Her book explores the social and political problems that reservations face and discusses potential ways to address them. Riley’s arguments come to life with many firsthand accounts that explain the on-the-ground experiences of real people.

Riley is careful to acknowledge cultural and institutional diversity among various tribes, but she highlights the many commonalities among tribes because of their shared history of colonization, subjugation, and paternalism. Riley weaves together an array of narratives, discussing a variety of Native American groups, including the Lumbee people in North Carolina, the Crow and Northern Cheyenne reservations in Montana, the Pine Ridge Reservation in South Dakota, and the Kamloops band in British Columbia, among others. She implicitly and explicitly emphasizes three important ideas.

First, institutions matter because all people respond rationally to incentives and constraints. If formal institutions set up perverse incentives or impose overly burdensome constraints, then we can expect undesirable social outcomes. The formal institutions that govern reservations often create perverse incentives for federal and tribal policymakers, as well as average Native Americans. Thus, it is not surprising that many reservations suffer from a long list of social problems. These same institutions also constrain policymakers and average citizens from discovering and exploiting opportunities for positive social change, including entrepreneurship and institutional reform.

Second, institutional problems demand institutional solutions. Throwing money at a problem isn’t likely to fix it and might even make it worse. Many of the problems on reservations are caused by institutional shortcomings. The only remedy for these problems is reforms that redirect incentives and constrain the use of arbitrary government power. Riley firmly asserts throughout the book that money has not solved the problems yet, and it is unlikely to in the future. The core problems are management issues, not money issues.

Riley covers many specific topics, including property rights, economic development strategies, legal uncertainty, education, and culture. One of the most foundational issues on reservations is property rights. The combination of two centuries of federal policies has led to the federal trust system—a system where the federal government oversees how land on reservations can be used, leased, or sold on behalf of individuals and tribes.

In line with many other scholars working on Native American issues, Riley argues that this property rights system is one of the principal drivers of poverty and other socially undesirable outcomes. The Bureau of Indian Affairs, the federal agency that manages the federal land trust, can block sales, leases, or other uses of trust land. As such, the land trust increases the transaction costs of the day-to-day use of property rights, making economically productive actions more difficult.

Many tribal leaders have realized how the complex and convoluted property rights system on reservations has affected them economically. One of the biggest problems is that individuals can’t use their trust land as collateral for loans because repossession isn’t an option in the case of a default. Some tribes have “attempted end-runs” around this policy, with some successes and some failures. Some tribal governments have backed mortgages for individuals who couldn’t get traditional loans, “essentially putting up the tribal coffers as collateral on the loan” (p. 17). As might be expected, moral hazard problems have arisen, leaving those tribes on the hook for defaults. Such examples show how hard real-world institutional reform really is.

Economic development is one of the main topics that Riley explores in the book. Since many reservations are in remote areas and have their land tied up in the federal land trust, private enterprise is not especially prevalent. Thus, most economic opportunities are found in tribally owned businesses, but these businesses aren’t without tradeoffs. For example, casinos have become the main revenue generator for many tribes, but some of those tribes have struggled with a rise in gambling addiction. Riley highlights that casinos aren’t a panacea for economic development, and tribes should look for a diverse set of economic ventures to improve their revenue streams and standards of living.

Since tribes can make their own policies that are largely separate from state law and regulations, they have tax and regulatory advantages that have led policymakers to exploit business opportunities that wouldn’t be especially viable on non-reservation land. In the past, convenience stores, tobacco, gambling, and government contracts have been major sources of revenue. Over time, many of these tribal enterprises have been eroded away. For example, several state governments have partially legalized gambling on non-reservation lands, reducing the profits that tribes have relied on. As Native American policymakers look to the future, they are considering how to use their tax and regulatory advantages to boost economic development on their lands to provide the goods and services that will help their people thrive.

Regarding economic development, one pitfall of tribal and federal policymakers is a central planning mindset. Bureaucrats simply do not and cannot have the knowledge to know what goods and services are needed, when and where they are needed, and in what quantities and qualities they are needed. The answers to those questions are discovered through the market over time. Riley emphasizes: “You don’t need to travel to Beijing to see central planning at work. It’s everywhere on reservations” (p. 63).

Another central topic is the problem of legal uncertainty, which affects nearly every aspect of life on reservations. It’s often unclear how far tribal policies extend, whether state policies apply, and to what degree federal decisions can override tribal decisions. Because of this confusion, reservations have essentially developed different rules for different kinds of people, which contradicts the rule of law—the bedrock of American governance. One of the biggest problems is confusion over criminal jurisdiction. It’s common for law enforcement officers to be unsure of whether tribal, state, or federal officials have authority to investigate and prosecute crimes (see pp. 160–168).

Despite the problems with confusion over legal jurisdiction, there is not a straightforward answer. Riley elaborates on these difficult tradeoffs: “[W]hat’s the alternative? Either give more power to prosecute to the tribes themselves—the effect of which will probably be less effective policing and prosecution. Or give the power to the states—which the tribes would never go for because they want to maintain their sovereignty. Or change the sentencing guidelines in federal courts for Indians. All in all, this doesn’t sound like a winning proposition” (p. 164).

Another idea explored in the book is the cultural attitudes and expectations towards education. In many places, ambitious children or young adults striving to succeed educationally are accused of “acting white” (p. 129). Additionally, a “narrative of victimhood” is pervasive, which undermines the desire for people to gain an education or act entrepreneurially (p. 96). Despite these cultural understandings, there have been social entrepreneurs who have tried to promote education. For example, in North Carolina, Ben Chavis started a summer math camp for children of the Lumbee tribe (see pp. 105–114). However, Chavis’s approach wasn’t without controversy. The Lumbee and other tribes across the country have struggled with internal conflicts over different visions of education, how it should be administered, and who should administer it (see pp. 136–142).

Riley presents a few potential solutions to the social dilemmas that reservations face. The federal government could make reservations into states, which would reduce some of the legal uncertainty, but this approach is a nonstarter for political reasons. Other suggestions are to institutionally reform the land trust system, the law enforcement system, the child welfare system, and the federal-tribal education system. It seems clear that each of these systems needs reform, but alternative policy approaches aren’t spelled out in great detail. Examining the potential tradeoffs and opportunity costs of potential institutional reforms would be a fascinating and important extension of the work in this book.

While this book effectively portrays the nature of reservation life, the rhetoric used in some parts may put off readers who aren’t already sympathetic to the core arguments or familiar with Native American issues. There are several instances of assertions without empirical evidence to back up the bold (and sometimes controversial) claims. However, this doesn’t undermine any of the book’s core arguments.

The book invokes two overarching questions that social scientists, philosophers, and policymakers should wrestle with: What does good governance mean? And how is it achieved? Throughout the book, Riley identifies that when institutions are perceived to be unjust, a society will experience low levels of trust and cooperation, exacerbating existing social problems. For example, some tribes have developed a patronage system where employment in tribal agencies and enterprises is handed out to the family and friends of those in power—a power that has few checks and balances (see pp. 64–65). Although the problems are well-known to reservation residents, potential solutions are often met with skepticism.