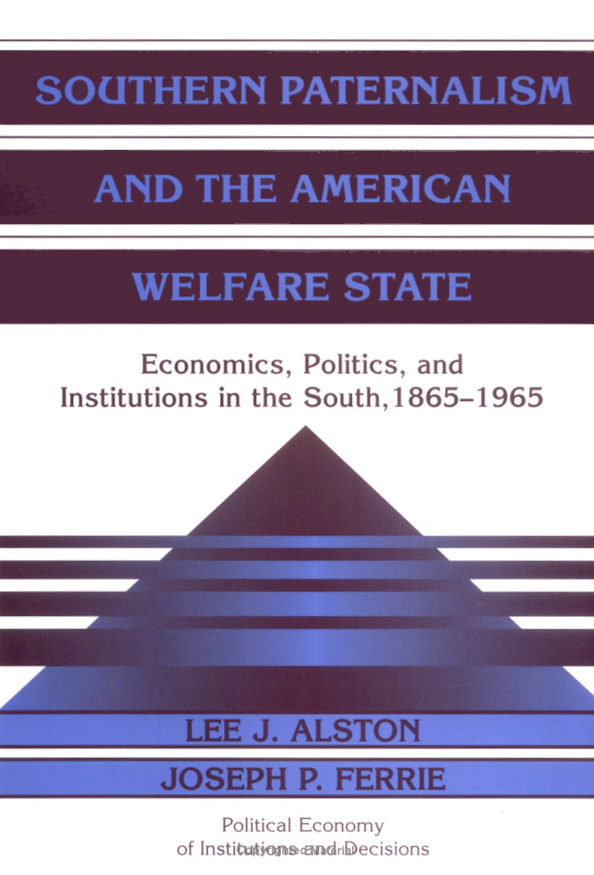 The decline of a private system of social welfare on southern cotton plantations, Lee Alston and Joseph Ferrie maintain in this sprightly institutionalist history, was the prerequisite for the rise of the national welfare state in the United States. Three conditions, they argue, supported southern paternalism. First, white and especially black tenant farmers and sharecroppers needed well-connected patrons to protect them from antipathetic laws and adverse economic and social norms—laws and norms fostered and enforced by the privileged class from which patrons could be drawn. Second, plantation owners had an incentive to provide their workers with protection and to facilitate loans to them in order to reduce labor turnover and the monitoring costs of a decentralized production process. Paternalism bought loyalty and hard work. Third, owners opposed any extension of national welfare benefits to southern farm workers because such laws might interfere with patron-client relationships or even substitute a governmental for a private patron. Fortunately for the plantation owners, the South’s one-party politics and the House and Senate norms designating the most senior members as powerful committee chairmen gave white southerners effective veto power over national social welfare legislation. The combination of these three factors allowed the paternalistic equilibrium to be maintained for a century after the Civil War.

Only when an exogenous technological change, the perfection of the cotton-picking machine, disrupted the equilibrium in the 1960s could the American welfare state mature. Plantations no longer needed workers with “farm-specific” skills, and they required far fewer total workers. With nothing to gain from paternalism any more, planters could transfer the costs to the public. The plantation elite and its political minions in Congress therefore finally allowed comprehensive welfare bills to pass.

Offering a tidy explanation for puzzling and significant regional and national trends, integrating politics knowledgeably and seamlessly into an essentially economic analysis, interpreting paternalism as an economically rational bargain, rather than a misty ideological-cultural construct, and avoiding mathematicized theory and statistical estimations, this short, provocative book should fit well into courses in economic history and American political development, and it deserves the attention of nonacademic readers interested in American history. But its omissions make its arguments less than wholly persuasive.

Slavery was the prototype of a dependency relationship. Reconstruction was the most violent period of southern history between 1865 and the present. Labor arrangements were more in flux and more new areas were settled in the South in the 1860s, 1870s, and 1880s than at any time thereafter. The social habits of hierarchical relationships ought to have been most familiar during these decades, and if Alston and Ferrie’s model is correct, both workers’ demands for paternalism and owners’ desires to supply it ought to have peaked then. One would therefore expect the focus of a book about post-emancipation paternalism to be on this period. Yet Alston and Ferrie barely discuss it. Instead, more than three-quarters of the book is devoted to the years between 1933 and 1965. Although they never spell out their rationale, they apparently believe that because systematic direct evidence about southern paternalism is so difficult to obtain, the best way to illuminate the nature of paternalism is to look at events that can be interpreted as opposition to attempts to replace it.

Thus, their three central chapters concern southern congressional opposition to covering farm workers under the Social Security Act in the 1930s and to the increasingly radical Farm Security Administration in the 1930s and early 1940s, and southern delegations’ support for the bracero program to bring in largely Mexican farm workers on a temporary and highly regulated basis from 1942 through 1964. In each case, they draw almost entirely on secondary sources, rather than gathering and analyzing original data themselves, and the chief alternative hypotheses that they confront are the contentions that southern legislative behavior was the product of a conservative mentality or pure racism, or that it was aimed merely at keeping southern farm workers’ wages low, rather than representing a desire to preserve private paternalism unfettered.

They are surely correct in rejecting the idea that the South was consistently devoted to principles of conservatism or laissez-faire. Federal farm loans, demonstration projects, crop price supports, acreage restrictions, flood control, electric power, and a host of other programs, including almost all of those of the early New Deal, received enthusiastic support from nearly all southern whites. (The opinions of the largely disfranchised southern blacks didn’t count before the 1940s and are therefore difficult to gauge.) And because the exclusion of agricultural workers from unemployment, old-age, and mothers’ pensions affected more white than black workers, pure racism seems inadequate as an explanation. But when Alston and Ferrie partially reject the low-wages argument on the grounds that owners were already providing old-age and unemployment benefits (p. 59), the difficulty with their general indirect strategy becomes clear: They do not knowindeed, probably no one knowshow general, comprehensive, and generous paternalism was. If the benefits were offered by only a small proportion of farmers or by all farmers to only a small proportion of workers or if in any event they were miserly, then the low-wages argument is not so weak after all, and perhaps we do not need the complications of side benefits. It also seems unsatisfying that the authors mention but never analyze the congressional actions of 1950, 1954, and 1956 that brought farm workers under Social Security, all of which took place before the widespread adoption of the cotton-picking machine. Why did those facets of paternalism cease to be worth protecting just then, if that was what the members of Congress were doing?

The Farm Security Administration (FSA), which succeeded the early New Deal Resettlement Administration (RA) in 1937, fits Alston and Ferrie’s case better. Besides helping small farm owners, the RA and the FSA provided loans to distressed tenants, set up cooperatives, and often sought better, more standard terms in tenant contracts. Such programs did not directly increase wages, but they did threaten the traditional landlord-tenant and merchant-tenant relationships. As the FSA expanded the original RA programs, southern planters and their congressional representatives increasingly protested, until in 1943 they managed to slash the most threatening programs dramatically.

Alston and Ferrie point out a strange fact about the bracero program—that support for it was higher from southern members of Congress than from those of any other region, even though only two southern states, Arkansas and Texas, received any appreciable number of bracero workers—and offer their paternalism thesis to account for the anomaly. Wartime restrictions on the geographic mobility of agricultural workers and local boards’ ability to defer farm workers from the military draft as “essential” for the economy helped keep southern farm labor in abundant supply and wages low. The bracero program, which continued long after World War II and the Korean War, had the same effect, because it expanded the national supply of agricultural labor.

There are two difficulties with the paternalism solution to the anomalous pattern of southern support for the bracero program: First, braceros were essentially employed in the Southwest, Michigan, and California to pick crops. Would tenants and sharecroppers in great numbers have joined the migrant stream if the formal bracero program had not existed, but if some portion of the demand for pickers had been satisfied by undocumented immigrant workers? It is not clear that the human capital built up during relatively sedentary tenantry would have transferred well to picking fruits and vegetables, or that trading a sharecropper’s shack for a migrant labor camp was a good bargain. Second, even assuming that they would have become migrants or that southern farm proprietors would have feared that they would, a desire on the part of those proprietors to keep workers’ wages low is just as satisfactory an explanation as the more complicated paternalism thesis.

Perhaps the boldest claim in this book is that it was a shift in the attitudes and behavior of the plantation elite, not the reenfranchisement of southern blacks or the increasing political potency of northern black and white liberals, that led to the full-blown national welfare state, which Alston and Ferrie associate with Lyndon Johnson’s Great Society programs (p. 120). Although it is true, as they emphasize, that southerners did retain considerable power in congressional committees through the end of the 1960s, their constituencies were changing and becoming more complicated, and they were by no means as responsive to cotton plantation owners as they had been earlier. The combination of the boll weevil, the agricultural depression of the 1920s and 1930s, and New Deal agricultural programs diversified the region’s agriculture. Even before the passage of the Voting Rights Act in 1965, nearly 40 percent of African-American adults were registered to vote in the South. Urbanization, suburbanization, cracks in one-party control, and the anticipation of political upheaval to come also helped to change politicians’ strategies. Mechanization was important, and Alston and Ferrie’s discussion of it is nuanced and provocative. But even assuming that the pre-1960 expansion of the welfare state can be largely ignored, it will take more evidence, including direct evidence from the mouths or papers of members of Congress, to establish mechanization as the sole or chief cause of southern political change that allowed the expansion of governmentally provided welfare.

Alston and Ferrie’s explicit development of an economic model of paternalism suggests questions that more casual discussions do not raise. How would one test the degree to which paternalism was an economic, rather than a cultural or social phenomenon? How did it vary from place to place and from time to time, and were those variations the product—as Alston and Ferrie’s model implies—of differences in the levels of prosperity, violence, public services, and bias in private institutions such as those that granted credit? How did individual southern states differ in the importance of paternalism in their social and economic structures, and how did its importance change? How mobile was southern agricultural labor, and how did that mobility differ from area to area and change over time? Would many tenants stay on one plantation long enough to take advantage of old-age and medical-care benefits, and could owners expect them to? Was there any connection between plantation paternalism and the welfare capitalism of early twentieth-century textile mills and other enterprises faced with high quit rates? Given that other agricultural proprietors, such as California corporations that employed largely migrant labor under decidedly nonpaternalistic conditions, also virulently opposed governmental interference in agricultural labor relations, except to regularize their exploitation of workers, was paternalism necessary to explain southern opposition to analogous state measures?

J. Morgan Kousser
California Institute of Technology
Economic History and DevelopmentEconomyEntitlements and Welfare
Subscribe Buy This Issue Get the App