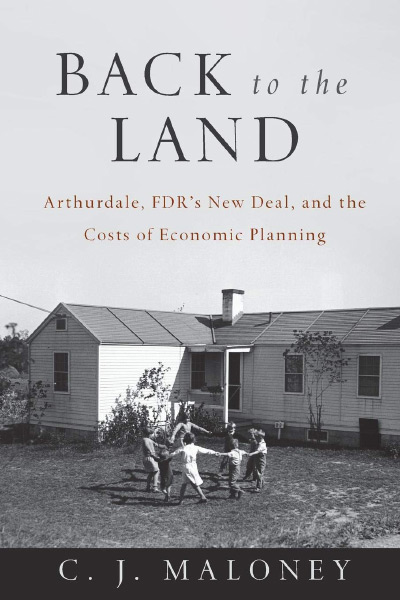 Back to the Land
Arthurdale, FDR’s New Deal, and the Costs of Economic Planning
C. J. Maloney
Kindle Hardcover Paperback Mass Market Paperback
This book review appeared in the Winter 2011/12 issue of The Independent Review.

During the Great Depression, a host of intellectuals and public officials worked hard to persuade Americans that “the market is the problem, and government is the solution.” The Depression had discredited laissez-faire capitalism in the eyes of a public ready to embrace the interventionist policies centralized in Washington, D.C., and proposed by energized government authorities and academic scribblers. In this regard, the 1930s have much in common with today, especially after the panic of 2008.

An important difference between then and now, of course, is that people in the 1930s had not witnessed the utter failure of collectivist central planning, whether of the fascist, socialist, or Communist varieties, as we have. Also, in the 1930s, cogent analyses of “government failure” were rare. Today we have revisionist histories of the Great Depression from which to draw lessons (if we care to do so), from Murray Rothbard’s America’s Great Depression (Auburn, Ala.: Ludwig von Mises Institute, [1963] 2008) to Amity Shlaes’s The Forgotten Man: A New History of the Great Depression (New York: HarperCollins, 2007).

C. J. Maloney’s Back to the Land is an important contribution to that literature. As the subtitle of this work of local history indicates, the planned community of Arthurdale is its subject, the New Deal the historical context, and the economics of central planning the analytical framework. Indeed, Maloney’s knowledge of sound economic principles grounds his critical analysis.

I hadn’t heard of Arthurdale before reading this book, but I’m glad to have made its acquaintance. Maloney’s account of it is a worthwhile and well-told story of how good intentions and bad economics get slapped in the face by reality. For urbanists, the book reveals an important episode in urban—or, rather, antiurban—planning. The motive behind the creation of Arthurdale and the dozens of similar communities that the government constructed in the 1930s was to bring the working poor “back to the land” and out of urban areas, which the likes of Frederic Engels, Ebenezer Howard, and Frank Lloyd Wright viewed as the epitome of economic injustice and physical and moral decay.

If successful, Arthurdale would have paved the way for the rest of America to become a place of decentralized, nonindustrialized subsistence homesteads. Fortunately, it was not successful. Indeed, it could not possibly have succeeded unless the government had possessed the power to repeal the laws of supply and demand. Try as they might, the New Dealers could not drive the love of private property and individual initiative out of the Arthurdalians (p. 199). Unfortunately, as Maloney points out, policymakers have not learned very much from this lesson (p. 213).

In the late nineteenth century, an increasingly materialist and naive rationalist view of society endorsed central planning here and abroad. At the local level, in places such as Arthurdale, governments dreamed of creating a better world by constructing a better man (p. 7). Starting with the industrial worker, who was presumably already degraded by capitalism, planners would further strip him down to his statistical essence and relocate him to a rural environment where he could be reeducated and cared for by his intellectual and moral superiors.

Maloney argues that Arthurdale “changed everything” in the way the government approached policy (p. 9). Although he rightly characterizes the back-to-theland scheme as “deeply conservative” (p. 61), Arthurdale was the most detailed and radical experiment in social constructivism that the U.S. government had yet undertaken. At the level of the macroeconomy, of course, the attempts to use monetary and fiscal policy to direct the economy were unprecedented in their own way. But in Arthurdale, because the subjects numbered in the hundreds rather than in the millions, planners could monitor and control (or so they believed) the microexperiment much more closely and intrusively. It was, however, a strange kind of social experiment in which no one paid any attention to real outcomes, which, as Maloney documents, were overwhelmingly bad (p. 194).

Arthurdale was, Maloney explains, an unintended consequence of World War I. Working-poor families across the coal-mining communities of West Virginia were lifted by the boom in coal demand artificially stimulated by the war. With peace, the boom went bust, but thanks to the wage floors won by coal miners’ unions with the help of government meddling (p. 28), wages stayed high even in the face of precipitous drops in coal prices. Coal companies suffered chronic losses; many laid off workers or went out of business.

The coal miners’ high unemployment and terrible living conditions caught Eleanor Roosevelt’s eye. She and others pushed hard for a program to relocate worthy families from hard-hit communities to brand-new “subsistence homesteads” across the country, and in 1933 a $25 million appropriation from Congress created the Division of Subsistence Homesteads (DSH). The DSH’s long-term objective, however, was not to open creative opportunities for the downtrodden, but to build “a new American man” (p. 2) and “a new social order” (p. 155) in which “the common good” would replace “selfish motives” (p. 199). The program lasted until 1947. “[T] he subsistence homesteads were to be a combination of small, semi-autrakic farm villages with a nationally planned industrial policy that, through intelligent central planning would decentralize America’s industrial base” (p. 75). (It is easy to connect this project with FDR’s creation of the Federal National Mortgage Association and similar agencies, which were intended not only to promote homeownership, but also to inoculate lower- and middle-income Americans against revolutionary ideas.)

A lack achievable goals—“a mishmash of contradictions and wishful thinking” (p. 201)—ignorance of local conditions, and reckless disregard for the bottom line proved disastrous (pp. 96, 99). For example, orders were placed for prefabricated houses that were good only for summer weather and had to be built, rebuilt, and rebuilt again to make them habitable—all at enormous expense to taxpayers in the depths of the Depression (pp. 107–11). The cost of each homestead was eventually more than $25,000 at a time when similar houses sold for $5,000 (pp. 116, 181), an amount the poor residents could never hope to pay (and in the end didn’t have to pay because of subsidies). Estimated costs ran to well more than $2.5 million in 1942 for Arthurdale alone. Maloney aptly describes this mismanagement as owing to “bureaucratic dreamers run amok” (p. 94).

No one thought any great effort would be needed to turn coal miners into farmers (pp. 125–30). Small factories were built in town so that men could earn an income during the winter, but not much serious thought was given to what they might produce—another tragic comedy of errors (pp. 131–35). By 1940, the subsistence- farming idea had mercifully been largely abandoned (p. 127), and most of the factory buildings stood idle.

How did those who did not get the few government jobs available make ends meet? How could they afford to lease or buy their beautiful, extraordinarily well appointed homes? The citizens of Arthurdale were essentially wards of the state, Eleanor Roosevelt’s personal pets, able eventually to buy their homes at steep discounts (pp. 121–24, 193). Of course, the vast majority of Arthurdale’s residents, even when the regulations chafed the most, were naturally very glad to have escaped the squalor from which they had been carefully plucked. Maloney is careful not to paint their picture as completely bleak (pp. 144, 189).

The very names of the principal actors—Elwood Mead, Elsie Clapp, Bushrod Grimes, and Rexford Tugwell (one almost expects Elsworth Toohey’s name to be among them)—evoke a time very distant from our own, a time when eugenics and blatantly racists policies (pp. 64, 82, 101) were subjects openly discussed among respectable intellectuals, and collectivism and central planning were the hope of the future.

That today’s world is similar is not surprising, given the odd “experimental but nonempirical” approach of the collectivistic mindset. Indeed, one hears strong echoes in recent proposals for massive government spending on “shovel-ready projects” to stimulate the economy to get us out of our current government-created mess. Arthurdale was about as shovel ready as one can imagine, but, except for the fortunate few, the results were not good.

The book is a bit repetitive in places, especially in the opening chapters. More substantively, I think Maloney’s assertions that “much of the America you see had its genesis in Arthurdale” (p. 4) and that it was the “cradle of modern America” (p. 10) are overstated. Arthurdale certainly advanced a rising paternalism in American health, education, and welfare, but socialized medicine, public schools, federal housing, and what we today call the “nanny state” proceeded for the most part from other, larger causes, especially World Wars I and II. Nevertheless, Maloney argues convincingly that Arthurdale was an important stage in that development. I am grateful to him for writing a readable, meticulously researched and referenced tale of a largely forgotten episode in American history.