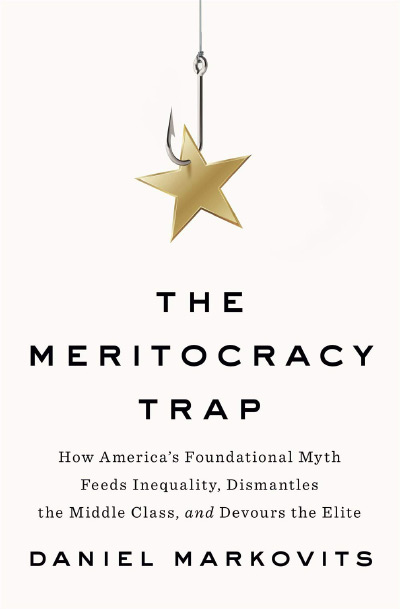 The Meritocracy Trap
How America’s Foundational Myth Feeds Inequality, Dismantles the Middle Class, and Devours the Elite
By Daniel Markovits
Kindle Hardcover Paperback Audiobook
This book review is a web exclusive for the Winter 2021/22 issue of The Independent Review.

“Merit is a sham.” One can excuse the hyperbole of Markovits’ opening sentence, but he’s serious about seeing meritocracy as over-rated, ethically challenged, and practically troubling. While meritocracy is all about opportunity in theory, it doesn’t work that way in reality.

Markovits writes as one of the meritocrats—a law professor at Yale, living and working among elite students and faculty. His writing style and analysis are what one might expect from a meritocrat. The writing flows well but is thick. The book is well-documented (127 pages of figures, tables, endnotes, and an index). But his analysis is too confident and ironically suffers from relying too little on others with the relevant merit—economists and other social scientists who have much to offer about what he is trying to analyze.

Markovits is sloppy on causation vs. correlation—a common bugaboo for analysis in social sciences. Although he admits in one case that a “stylized story glosses over many complexities” (239), he relies far too much on stories. And he imagines high degrees of coercion within largely-voluntary activities: The elite “plunder” the middle class (108) through “discrimination” (xiv), which results in their “suppression” (4)—“[being] denied” and “increasingly idled” (4, 187).

There are many topics where discussions with economists would have improved the book. There’s nothing on the human capital vs. signaling aspects of education. He conflates “returns to education” for consumers and taxpayers. (It’s high for the former, but low for the latter—at least with government running so many K-12 schools and subsidizing college so heavily.) He has some strange ideas about the interaction of education, labor market dynamics, and marginal revenue product (264–266). He repeats common myths about “thrift finance” (218) and the New Deal (274). And he misses higher incomes and reduced transaction costs as a key component in the transformation of “elite” higher education.

More troubling to his thesis: In citing income statistics, there’s little sense that Markovits understands the role of significant changes in demographics and household structure—and no sense that he understands the implications for government’s measures of income after tax reform in the 1980s. And he is really sloppy with income categories, conflating the various subsets within the middle class and moving too easily from the rich to the “super-rich.” For example, the middle class ends up encompassing everyone from mechanics to upper-management mechanical engineers. As such, phrases such as “middle-class resentment” are incoherent.

Sometimes, Markovits observes important things but fails to recognize significant factors that should bear on his analysis. He notes the increase in “workplace competition” and a reduction in union strength, but ascribes the changes to a shift from aristocracy to meritocracy, with little contribution from increased market competition, greater globalization, and so on. He cites the impact of increased automation in fields like fast food and retail, but only sees the obvious downsides of this for labor markets, rather than the less-obvious benefits (160, 177–178, 181, 222, 247–248). He notes the increased prevalence of “superstars” in entertainment (178), but doesn’t include an analysis of these specialized markets. He points to the increased use of screening, but doesn’t seem to understand its greater value when production methods are more varied and worker heterogeneity is greater.

All that said, Markovits is often spot-on. He argues that race and gender matter, but class matters much more (26, 50). He’s clear on the differences between inequality and poverty—and how this has changed over time (78, 99, 102). He cites Thomas Piketty favorably, but argues that the effects are far too small to be a primary explanation (88–93). He understands capital gains as a significant aspect of compensation, especially for the elites—and the implications of this for measurements of income, wealth, and inequality (91).

I was surprised to learn that higher education is responsible for 45% of all U.S. spending on education—about $35,000 per student (138). This average is influenced by the heavy tail of the distribution: big spending for elite undergraduate education and post-graduate training, especially within professional schools. And Markovits is correct in pointing to the immense subsidies (direct and indirect) for higher education. But he imagines that K-12 spending is the key problem, when it’s already $15,000 per student—and so, $375K per classroom of twenty-five. His most extreme example of K-12 spending still has two-thirds of the national average—even less interesting when one considers different costs of living (126–128). And he conflates cost and “worth” of education, as if spending correlates strongly with quality in K-12.

One particularly shocking omission: Markovits has nothing on Charles Murray’s excellent book in this area, Coming Apart: The State of White America, 1960-2010 (New York: Crown Forum, 2013). It’s difficult to imagine how he could overlook it. (Perhaps it’s a bow to elites who would like to de-platform Murray. He even uses the phrase “coming apart” twice in the introduction, as if to wink at those who know the book should be referenced [xx].) He does follow Murray in discussing the importance of “assortative mating” (116), the unicorn-like lives of the “super-elites,” and the cultural differences between different economic and educational classes (211–216).

Markovits also echoes Murray in talking about the importance of family (chapter 5). But ultimately, he downplays this crucial factor to focus on work (type and amount) and education from pre-K through college (275). As a result, he ends up treating the supply-side of labor as fixed in terms of quality, ignoring crucial contributing factors: trouble with family structure and stability, inefficient and otherwise-suboptimal provision of K-12 schooling by the government, and the interaction between the two. And he is only impressed with certain types of work—e.g., seeing many lower-end jobs as “dead end,” rather than as lower rungs on a ladder (160). Supposedly, “competence and an honest work ethic no longer assure a good job” (xiv).

His analysis is also too materialistic, with little weight placed on the importance of “values” and an attraction to non-material standards of living. This is one overlooked aspect of assortative mating—not just a high value on education but a certain general approach to life (48). It also undervalues what many people voluntarily choose—greater community, a quieter life, less focus on work, and so on. He sees few “class migrants” as a lack of opportunity—when people are often quite content to choose less money, more leisure, and a small town/city lifestyle away from the proverbial rat race (229).

Throughout the book, one of his chief points of comparison is St. Clair Shores, Mich.. Despite the reduced prosperity of being attached to Detroit—now, compared to decades ago—life there involves “no acute deprivation...no obvious injustice...children play in well-tended yards on tree-lined streets of modest...well-built and immaculately maintained one-story houses...Nothing in the town is out of reach...[and it is] more culturally democratic than Seattle” (21, 28). Sounds good! It’s not what the elite want, but it’s the goal for many people—and quite reasonably so. Or from another angle, do people actually experience increased inequality, in their day-to-day life, beyond a handful of pop culture references? And if so, do they care? The failure to understand these differences in “values” leads Markovits to a blinkered view of many non-elites.

He also places too much faith in government, politics, and democracy: “politics must overcome all the vulnerabilities and bad incentives that meritocracy enshrines in public life”—as well as calls to “democratic renewal” and “generous and redemptive politics” (xxiii). Beyond naivete, this vision is incoherent alongside his own references to self-interested pursuits of government power to defend wealth (52)—although his only examples are the Walton family and the Koch Brothers!

Despite these critiques, I think the book still has sufficient value to read and even to consider using it in an upper-level Economics classroom (if critically read and engaged). Markovits conveys some important principles—some of which were novel to me. He’s helpful in describing aristocracy and meritocracy in broad terms. Aristocrats are born rather than made; focused on land rather than human capital; and passionate about leisure much more than work (96). He also argues that “regression to the mean” is less likely for meritocrats, since human capital can be passed along more easily through genetics and environment (149–150).

Markovits is helpful in talking about inequality within the spectrum of wealth and income, distinguishing growing inequality between the rich and the middle class, in contrast to the middle class and the poor. He cites “academic achievement”—what seems to be measured solely as SAT scores (26, 131–132, 201) and college education (134). And he compares Gini coefficients for the three income categories (105). He also provides a useful account of the growth of finance as a field—from obscure and fading to booming with technological advance and the emergence of the elites (163ff).

Perhaps most important to our turbulent times, he recognizes the elites’ contribution to their own troubles—by choosing a lifestyle of affluence and “superordinate” work, but also in terms of their common approach to politics (271–273) in their battles with “populists” (60–70). If elites read this book while sitting near a mirror, they may revisit their personal values, have more empathy for others, and reconsider their often-destructive approach to politics.