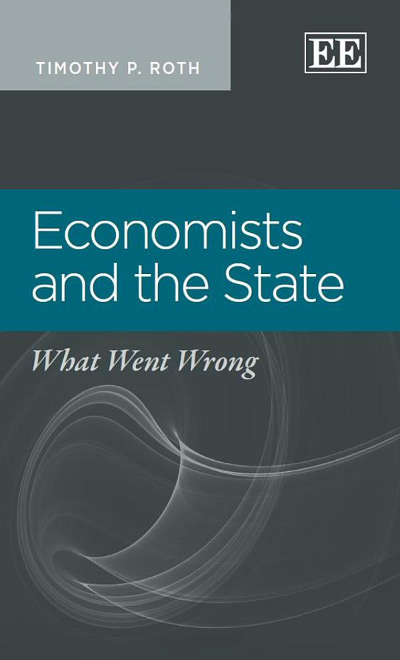 Economists and the State
What Went Wrong
Timothy P. Roth
Hardcover
This book review appeared in the Summer 2015 issue of The Independent Review.

Timothy Roth has written a long series of short books that criticize modern welfare economics and contemporary policies in the United States. Economists and the State: What Went Wrong extends the series by focusing attention on constitutional issues. It argues that contemporary policy problems in the United States should be considered consequences of a long drift away from principles of classical liberalism that has been aided and abetted by arguments from neoclassical economics. The book’s methodology combines intellectual history with contemporary policy analysis. Roth presents himself as a proponent of classical liberalism in the tradition of Smith, Kant, Jefferson, and Madison.

Chapters 1 and 2 provide an overview of arguments made by Smith, Jefferson, and Madison, among many others, concerning ethics, civic virtue, institutional design, and political economy. These chapters use a series of multisentence quotations that give readers a strong sense of these men’s ideas. The quotations are very well chosen and provide convincing support for Roth’s interpretation of their work and thought processes. Although Roth also stresses Kant’s role in the development of these ideas, he provides few quotations from Kant’s work. Overall, these chapters do a very nice job of conveying the Western intellectual atmosphere of the late eighteenth century, during which the U.S. constitutional documents were worked out.

Chapter 3 is a short critique of contemporary welfare economics, stressing various problems associated with utilitarianism and neoclassical economics. Chapter 4 begins with a short history of the growth of central-government authority and expenditures in the United States and ends with Roth’s argument that this growth occurred because of the unraveling of the Founders’ constitution. This unraveling was due in part to a shift in what Roth calls “public philosophy,” which includes reduced emphasis on institutional thinking and what James Buchanan and Roger Congleton (Politics by Principle, Not Interest [Cambridge, U.K.: Cambridge University Press, 1998]) designate the “generality principle.” Chapter 5 provides examples of contemporary legislation that violate generality or Kantian universality. Many were put together in a rather haphazard manner. For example, Roth devotes a great deal of attention to the Troubled Asset Relief Program (TARP) legislation adopted in 2008 during the middle of the financial crisis. Chapter 6 concludes the book with a recommendation that the generality principle be restored, constitutional limits be respected, and utilitarian welfare economics be replaced with contractarian analysis, as in John Rawls’s and James Buchanan’s work.

Overall, the general line of argument in Roth’s book has much to recommend it, and the specific supporting arguments and quotations are often insightful and interesting. However, as with any work that tries to cover so much ground in too few pages, there are distracting “hiccups” every few pages. In this respect, Economists and the State reminds me of work by Gordon Tullock, although these two authors’ styles and emphases are quite different. The one major point on which I find myself in disagreement with Roth is the great influence he ascribes to economists and intellectuals in general. Many of the Founders were well read and very accomplished constitutional theorists—for example, Madison and Adams—but in the main they were practical men rather than philosophers. Nearly all had had long careers in colonial politics before they turned their pens to drafting a constitution. Their real-world experience allowed them to see what worked and what did not in their own colonies’ institutions, which provided much of the basis for the design of the U.S. Constitution (see Roger Congleton, Perfecting Parliament: Constitutional Reform, Liberalism, and the Rise of Western Democracy [Cambridge, U.K.: Cambridge University Press, 2011], chap. 18). The intellectual environment in which they lived was also important, but it was likely to be less important than their adult experience in real political institutions.

The same may be said about the extent to which the ideas of welfare economics inform contemporary policies. At best, economists influence contemporary policy choices at the margin. The practical interests of elected and unelected officials determine most of what gets adopted—as was the case with the TARP legislation and its various “sweeteners.” Moreover, utilitarian welfare economics can be used as easily to critique contemporary policies as to support them—as, for example, with the real- gross-domestic-product-reducing effects of a broad range of regulations and tax policies and the distributional critiques of tax preferences (which are mostly for the benefit of the relatively wealthy and well organized).

In spite of this problem and other minor ones, the book makes several important points rarely seen in economic or political writings these days. Both beliefs and rules matter and are not independent of one another. Changes in voters’ and government officials’ beliefs can alter both their interpretations of constitutional constraints and the demands for public policy—and can do so for the worse.

Reminding readers of the ideas of classical liberalism and modern contractarianism may well help to correct many of the problems of contemporary public policy in the United States and elsewhere in the West. This book makes a strong effort to get those ideas across to readers and largely succeeds in that task.