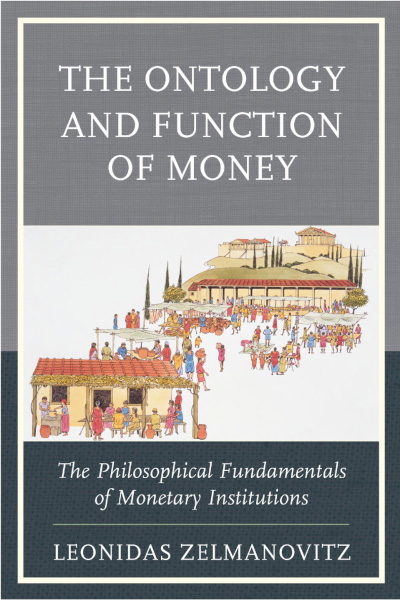 The Ontology and Function of Money
The Philosophical Fundamentals of Monetary Institutions
By Leonidas Zelmanovitz
Kindle Hardcover Paperback
This book review appeared in the Winter 2017/18 issue of The Independent Review.

The Ontology and Function of Money is a terrific source for scholars wishing to delve more deeply into the history of the philosophy of money and to consider how influential philosophies may be shaping present-day monetary institutions, including central banks and their increasingly esoteric policies. The book is a rarity because there hasn’t been a professional work on this topic since Two Philosophies of Money (1978) by S. Herbert Frankel and before that Philosophy of Money (1900) by Georg Simmel. Those books were much less comprehensive.

Beyond its rarity, this book will illuminate and expand any mind that is aware of how contemporary monetary policy is assessed primarily in formal or technical ways, with arcane models and analyses of such matters as bounded rationality, inflation targeting, quantitative easing, the zero lower bound of interest rates, “market monetarism,” and the Taylor Rule. It is also fruitfully interdisciplinary—no easy thing to execute. If we can learn more of the philosophy of money, the author suggests, we can learn more also about extant monetary institutions and whether they are ideal or even remedial.

Leonidas Zelmanovitz is an avowed classical liberal who accepts (albeit not uncritically) the main premises, insights, and principles of the heterodox Austrian School of economics. Accordingly, his approach may be unfamiliar to some neoclassical economists (especially the technicians), although not to Marxists, Institutionalists, or Keynesians (especially the philosophically minded). The latter might be uncomfortable with the book’s overtly liberal, pro-market leaning. Nevertheless, it should be a worthwhile read both for technicians wishing to check their roots and for market critics willing to widen their horizons.

Zelmanovitz does a nice job of describing the Austrian theory. This theory contends that all economic value (including the value of money) is “subjective,” reflecting a subject’s feeling of the utility of a thing rather than something intrinsic to the thing (or object) alone, apart from the subject. The theory further holds that money serves mainly as a common denominator and medium of exchange, facilitating production, saving, and investment in a decentralized, division-of-labor society. With money comes a price system and signals that help producers and consumers alike coordinate their aims and actions.

Zelmanovitz also places Austrian monetary theory in a broader context, with ample illustrative contrast. He identifies two rival views of money in history, one held by the Catallactics, the other by the Chartalists. The first group contends that money evolved naturally and spontaneously from barter, by mutually beneficial market exchange, and that specie became universally accepted money due to its unique properties and superior capacity as a medium of exchange, unit of account, and store of value. The main Catallactic theorists he discusses are Carl Menger,Georg Simmel, and Ludwig von Mises.

The Chartalists, in contrast, argue that money has always and everywhere been a product of the state, arising mainly from the needs of public finance (taxing and borrowing), from public mints that purport to guarantee a valid coinage, and from laws that codify certain moneys while proscribing others. This group, which includes Georg Knapp, A. Mitchell Innes, John Maynard Keynes, as well as today’s “neo-Chartalists” (adherents of “modern monetary theory,” especially L. Randall Wray), doesn’t deny money’s unique and economically beneficial functions but stresses that none of these functions can emerge in a nonstate (anarchic) setting. Zelmanovitz shows that most Chartalists are statists who believe markets (especially in money and banking) are prone to breakdowns and crises unless controlled by the state.

Although the Catallactics stress the natural, market-based origins of monetary institutions and want them left free of state control, they don’t deny that the state has exerted a large (and growing) influence on money, sometimes beneficially (by upholding property rights and enforcing contracts, most notably in the century before World War I) but also sometimes harmfully (by monopolizing and debasing money to satisfy fiscal needs beyond taxes and loans, particularly amid war and most notably in the past century). Both schools agree that coercive legal-tender laws have been critical in determining which forms ofmoney have become widely “accepted” by the public, but whereas Chartalists unabashedly defend such laws and related institutions (e.g., monopolistic central banks issuing fiat papermoney), Catallactics denounce them and instead endorse a system of unregulated “free banking,” whether with fractional or 100 percent reserves or specie as reserves or with Friedrich Hayek’s “choice-in-currencies” proposal from the 1970s.

The Catallactics, Zelmanovitz stresses, don’t insist on anarchy. They simply believe that money arises naturally and spontaneously from self-interested market activity. There is still a role for the state in their view: the state should acknowledge and legally protect market money, not manipulate or debase it. Note the implicit philosophic premises in that statement: it is a normative claim about how politics should treat money. The ideal system (suppose free banking on a gold standard) operates under a rule of law, in contrast to a system of central banking with purely fiat paper (and electronic) monies managed arbitrarily (with “discretion,” not fixed rules) by the equivalent of monetary commissars and mainly on behalf of the state.

Beyond the pro-statist Chartalists and the pro-capitalist Catallactics, Zelmanovitz provides informative sketches of a handful of other influential modes of thought: the sociological theory of money, the property theory of money, the credit theory of money, metallism, and monetarism. Each approach stresses different aspects of money, whether its status in societal norms, its property designation, its relation to debt, or its supply relative to its demand. Most of these modes incorporate elements stressed by Chartalists and Catallactics alike. In this regard, they differ mainly about the extent to which states have participated in the origin, evolution, and control of money and about whether that participation has been for good or ill.

Structurally, Zelmanovitz’s book has five main sections, the first four of which are devoted to free-wheeling discussions of the main branches of philosophy—metaphysics, epistemology, ethics, and politics. This organization makes some sense, at least hierarchically, and for the most part the discussion flowswell fromone section to thenext, despite some distracting and less-pertinent detours and repetitions. The metaphysics of money Zelmanovitz sees as pertaining mostly to money’s existential features, origins, and lineage. His best material is on nominalism, the view in epistemology that there exist no objective (reality-based) concepts but instead only mere names or “constructs” that people conventionally or arbitrarily assign. Zelmanovitz shows how this view can breed a notion of money as wholly artificial, as anything people happen to say it is—especially people who wield political authority. If money itself is arbitrary, that same arbitrariness might also be presumed about a nation’s monetary institutions and monetary policy. This is exactly what we see today, says Zelmanovitz. No official money has been tied to gold (or any other real asset) since 1971, and during this time one rule-based policy after another has been adopted and eventually jettisoned. All things monetary now seem wholly arbitrary; perhaps something as deep as nominalism is to blame.

The “ethics of money,” for Zelmanovitz, pertains not to questions of whether its pursuit or profit seeking or greed or even usury constitute “the root of all evil,” but rather to whether money permits and promotes “human flourishing” (Aristotle’s eudaimonia standard). It can do so, Zelmanovitz contends, only if left free. If money is instead controlled, contaminated, and co-opted by the state, economic chaos and human suffering result.Here his account would have been bolstered considerably by a presentation of Ayn Rand’s philosophy ofmoney as conveyed dramatically through Francisco’s money speech in Atlas Shrugged (New York: Random House, 1957) and more rigorously in her essay “Egalitarianism and Inflation” (in Ayn Rand, Philosophy: Who Needs It, paperback ed. [New York: Signet, 1984], 120–36). The former argues that money (if capitalistic) is the root of all good things, and the latter contends that anticonceptual epistemologies are the fundamental source of inflation and that production is undermined by fiat money’s gradual attenuation of the links between time preference, saving, and investment.

Substantively, the book’s four main sections on the branches of philosophy are written with care and fidelity to cited texts. Yet only occasionally does Zelmanovitz provide solid, salient connections to monetary matters, despite promising as much. For example, he devotes an entire chapter to Auguste Comte’s positivist philosophy from the 1850s with nary a mention of anything about money. Most pertinent in this regard, one might imagine, is that Comte provided the firstmodern vision of the state as some secular god, with citizens duty bound to obey it. Zelmanovitz acknowledges Comte’s vision, but he doesn’t tie it to anything monetary. Perhaps Comte fed a case for central banking (central planning in money and banking); but if not, and he did nothing more, why include himin the book? Epistemological aspects of the socialist calculation debate and the Hayekian “knowledge problem” (for central planners) are also mentioned, but again the author doesn’t use them as grist for any monetary mill. Similarly, we get glimpses of the fascinating debate about “rules versus discretion” in monetary policy, which seems relevant to questions of whether philosophically objective standards are possible and how much monetary power the state should or can capably exercise. But, again, little or no causal connections are made, even where such connections seem plausible.

At places, Zelmanovitz promises us an account of the links between philosophy and money, between philosophy and monetary institutions, as well as between philosophy and monetary policy. But the discussion is mostly about plainmoney, which is surely less interesting than the other two links, in part because it is such overtilled ground. Policy-wise, Zelmanovitz is intriguedmost by the inflation targeting of modern monetary planners, but he doesn’t trace it much to philosophy and adds that its results haven’t been so bad. Whether Chartalists or Catallactics will welcome that judgment more isn’t clear. To be sure, this book has a logical structure, but it is not obvious what it all adds up to thematically. In reading certain passages, I said to myself, “This is interesting, but what’s it got do with money, monetary institutions, or monetary policy?” Zelmanovitz wants to show us that philosophy matters monetarily and especially how it determines the state’s role in life, but only occasionally (and often confusedly) does he connect deeper aspects of philosophy to the particulars and controversies of money. Stylistically the writing is (at times) eloquent, but you should beware abrupt and illogical transitions or odd but scenic detours down culs-de-sac. If you read the book selectively, stay on its main roads, and make your own links, you can surely profit by it.