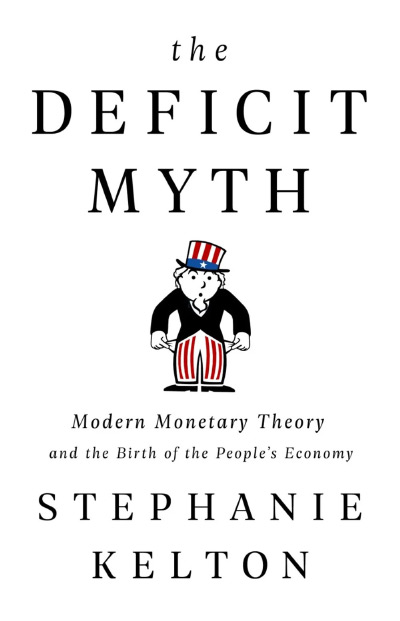 The Deficit Myth
Modern Monetary Theory and the Birth of the People’s Economy
By Stephanie Kelton
Kindle Hardcover Paperback Audiobook Audio CD
This book review is a web exclusive for the Winter 2021/22 issue of The Independent Review.

I feel like The Independent Review was having difficulty finding a reviewer for Stephanie Kelton’s The Deficit Myth. My evidence is that they asked me, a notoriously procrastinating reviewer. And indeed, my review is months late.

But my procrastination has paid off. While I dithered, the U.S. government has taken some steps down the Modern Monetary Theory (MMT) path Kelton lays out in the book, and we have seen some interesting results that are not very favorable to the theory.

In fact, on November 17, Noah Smith (no conservative he) tweeted the following to his 225,000 followers:

I suppose I could just stop here, but if you will indulge me, I will briefly lay out the core MMT idea in the book and how current events may be showing the extreme limitations of the movement for real world policy making.

To quickly (and perhaps overly) simplify, Kelton argues that since the U.S. government can print money, it will never run out of money! So, it makes no sense to say we can’t afford certain things or to worry about the deficit (hence the title). If we eventually spend too much, there will be inflation and the government can raise taxes to effectively fight inflation. In the meantime, we can use our newly embraced spending power to combat the “good jobs deficit.” the “health care deficit,” “the climate deficit,” “the education deficit,” and “the infrastructure deficit.” (Kelton’s names for the deficits she think matter the most.) And if we happen to run up huge fiscal deficits in the process, it doesn’t matter, unless we create unwanted inflation.

In some very real sense, the U.S. government under both Donald Trump and Joe Biden have taken a couple of steps down the MMT road. Let’s review: In fiscal 2019 total U.S. federal spending was $4.4 trillion. In March 2020 the CARES Act was passed at $2 trillion, then in December an additional $900 billion was appropriated. Not to be outdone, in March 2021, the American Recovery Plan passed with a price tag of $1.9 trillion followed by the infrastructure bill in November for another $1 trillion. And let us not forget the Build Back Better (BBB) bill, now through the House at another $1.9 trillion.

This adds up to appropriating an extra $7.7 trillion of spending (assuming BBB gets through the Senate) over and above normal, everyday federal spending in a little over a year and a half.

Now of course this all this budgetary authority doesn’t immediately translate to current spending. BBB will only be a few hundred billion a year! And, to be fair, we had the Covid shutdowns, both private and government mandated, to deal with. But the federal deficit hit 15% of GDP in 2020 and 12.4% of GDP in fiscal 2021. Kelton and MMT maintain this is irrelevant; that true evidence of overspending comes from inflation.

Well, inflation is rising too. The latest CPI numbers (October 2021) show a 6.2% annual increase. And yes, inflation is also rising in Europe. But (a) European governments are spending a lot as well, and (b) inflation is noticeably higher in the U.S. than Europe. Take a look for yourselves:

OK, so “for evidence of overspending, look to inflation”—and here it is. Progressive/ MMT types should be moving to raise taxes or cut spending. This is the brake in their system for when spending goes too far.

But by far the response has been denial. It’s just used cars, it’s transitory, it’s the base rate fallacy. Then we have the President arguing that passing the nearly $2 trillion BBB bill will be anti-inflationary. “Rocketing inflation has become a headache for U.S. consumers, and President Biden has a go-to prescription. He says a key way to help relieve increasing prices is to pass a $1.85 trillion collection of spending programs and tax cuts that is currently languishing in the Senate.”

Some even go so far as to argue that inflation is only hurting rich people and we should welcome it. Here’s Sarah Jeong (who may or may not be with the New York Times) tweeting to her 118,000 followers [Sarah Jeong has since made her Tweets “protected,” hence the screenshot rather than a direct embed]: 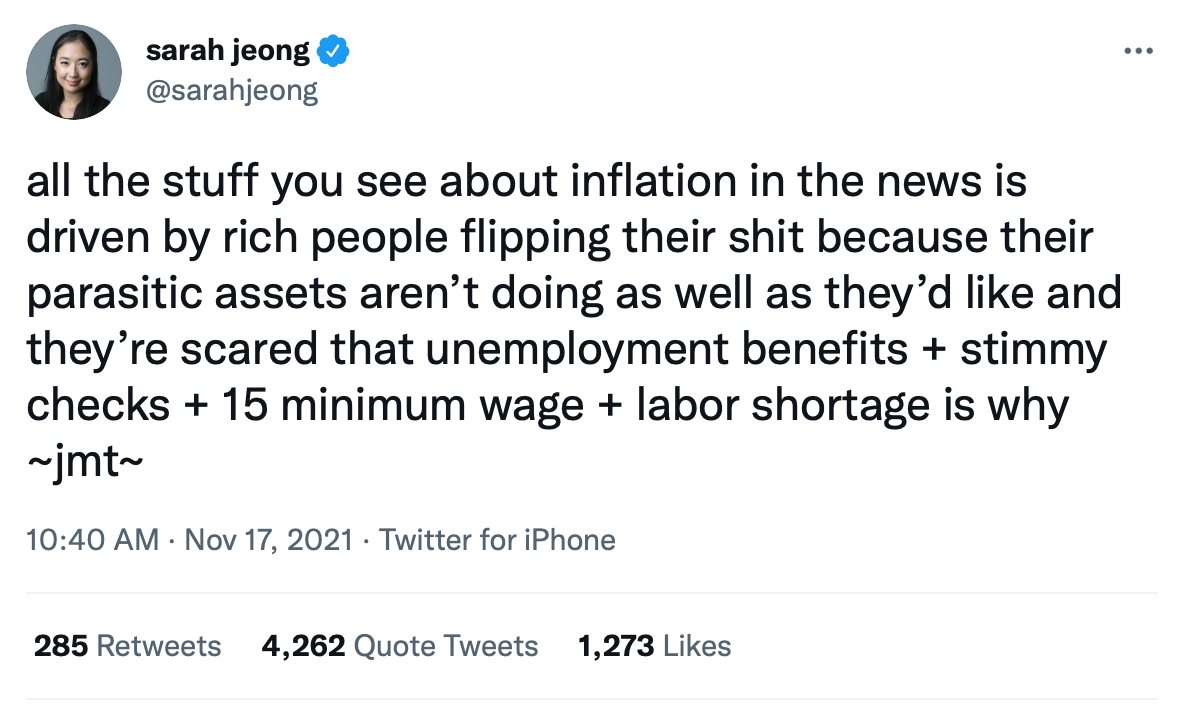 Don’t get me wrong, I like soaking the rich as much as the next guy, but it is actually average people who are being negatively affected. Here’s a graph of real median weekly earnings:

Now readers may wonder, has the government really hit the MMT highway? Am I mischaracterizing Kelton’s views? Is our current mess really an indictment of MMT?

Well, here is an article/interview with Kelton from back in June 2021 with the awesome headline, “Stephanie Kelton: Biden has Adopted MMT.” The article leads with this: “President Biden’s proposed $6 trillion budget will not be fully paid for with tax increases or other spending cuts. It will increase the deficit, according to Stephanie Kelton, and that constitutes an implicit if not explicit adoption of the principles of modern monetary theory (MMT).”

In June, inflation was already elevated. You may wonder what Kelton had to say about it, since in MMT inflation is evidence of overspending. Well, wonder no more dear reader: “Inflation is evidence of too big a deficit, Kelton said. But inflation does not mean that there is too big a deficit; it can be due to “excessive demand pressures.” That is what is happening, according to Kelton, with temporary shortages of goods like computer chips and lumber that will soon self-correct.”

So, Kevin, if MMT isn’t working, why should I read this book? Well, if you like drawings of buckets, this book will give you quite a few (19 buckets by my count). Or if you are interested in seeing a maximal take on the progressive agenda including a national (if not global) jobs guarantee, you will find it in these pages. As a political document it is fascinating.

And, as economics, I actually kind of buy it. Just like we have learned that high nominal interest rates are not always a sign of tight monetary policy, Kelton is correct that a big deficit isn’t necessarily a sign of overspending. But based on our current situation, it seems like the free fiscal space the U.S. enjoys is nowhere near big enough to finance even a fraction of Kelton’s policy agenda.

Finally, whatever its theoretical merits, as a politically feasible policy rule (keep spending until inflation goes up then raise taxes), MMT is just a disaster. We can barely get the nominally independent Fed to pull away the punch bowl; relying on Congress to exercise timely fiscal discipline in the face of rising inflation is pure fantasy.