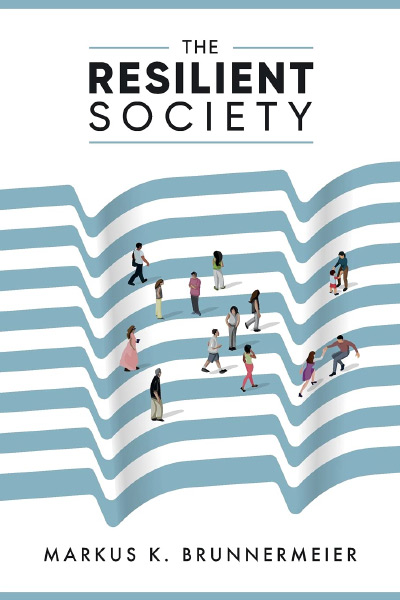 The Resilient Society
By Markus K. Brunnermeier
Kindle Paperback
This book review is a web exclusive for the Summer 2022 issue of The Independent Review.

When I was a kid, my father, a structural engineer, told me that the best way to prevent a building from collapsing during an earthquake was to let it move. The counterintuitive idea struck me: it sounded as risky as it was powerful. It turns out that this insight does not only apply to physical structures, but to social systems as well. This is what the economist Markus K. Brunnermeier studies in The Resilience Society.

Brunnermeier focuses on the flexibility that renders societies stronger. “A resilient society is able to react to and respond after a shock” (p. 13). This kind of “society bounces back like a trampoline” (p. 14). He contrasts resilience to robustness, which characterizes the “ability to resist shocks without adapting” (p. 18). An analogy with nature illustrates the differences between these two features. On the one hand, an oak in a storm exemplifies a robust system, which “can withstand the impact of most shocks, but it breaks in extreme circumstances” (p. 18); on the other hand, a resilient system acts like a reed: when facing strong winds, it “gives in, adapts, adjusts, and then bounces back” (p. 18). Even if the oak looks stronger, it is the reed that endures extreme weather conditions. Brunnermeier explores the flexibility that makes social systems adapt, adjust, and bounce back when facing unexpected disturbances.

Robustness and resilience have different goals. Whereas the former aims to minimize risks, the latter strives to cope with three major resilience destroyers: trap externalities, feedback externalities, and tipping points. Trap externalities refer to chain reactions in which a harmful event affects the ability of other elements to recover. Feedback externalities refer to strategic interactions that trigger cascades of reactions that destabilize the system. And tipping points mark the levels of disturbance that a system can bear before the damage is irreversible. Resilient societies promote diversity to prevent externality traps, incentivize “Mavericks” to resist feedback externalities, and strive to identify the tipping points so as to avoid them. For resilient societies, risk is not the problem since it is unavoidable, the problem is not being able to recover.

After building the conceptual apparatus, Brunnermeier spends the rest of the book showing how resilience has been useful in dealing with social problems. Traditionally, he holds, we have designed social, political, and economic institutions to be robust. The Covid-19 pandemic, however, reminded us that shocks, either predictable or unexpected, are unavoidable. In an interview with the economist David Beckworth, Brunnermeier acknowledges that The Resilient Society was initially a collection of analyses that originated during a webinar on Covid economics. These cogitations didn’t have a lot in common at first. It was only later that he realized that a common thread united the scattered thoughts: the importance of economic tools for bouncing back. Thus, to him, the main lesson of this pandemic is: “because we cannot avoid shocks as the world evolves, it is crucial for societies to be resilient—to be able to bounce back” (p. 315). Facing unforeseen disturbances means to stop pretending that we can shun them; we must instead acknowledge that they will occur. The best way to manage them is to shape our institutions to be flexible and ready to adapt to unexpected shocks. The Resilient Society examines the sense in which certain efficient policies have promoted resilience in macroeconomic institutions and theorizes about tools to further resilience in an array of social domains, such as the financial sector, macroeconomic institutions, the global order, wealth inequality, or climate change. In this lies Brunnermeier’s main contribution in this book.

The idea of social resilience is not new. However, its popularity has been limited to a rather small circle of scholars, not particularly close to decision-makers. Theories of complexity have been gaining more and more attention from theorists who realize that intervening in social systems is not a simple task. Some of the first insights about resilient societies come from the Nobel laureate Elinor Ostrom (2005, Understanding Institutional Diversity, Princeton, N.J.: Princeton University Press), which are developed further by Paul Dragos Aligica and Vlad Tarko (2014, “Institutional Resilience and Economic Systems: Lessons from Elinor Ostrom’s Work,” Comparative Economic Studies 56: 52 – 76). John Miller and Scott Page (2007, Complex Adaptive Systems: An Introduction to Computational Models of Social Life, Princeton, N.J.: Princeton University Press) provide a sophisticated formulation of adaptive systems. In political economy, Mark Pennington favors building institutions to “generate beneficial results even under the least favourable conditions” (2011, Robust Political Economy, Cheltenham, UK: Edward Elgar, p. 2). Even if Brunnermeier does not directly quote this literature, his ideas are influenced by it. From my perspective, a major achievement of The Resilient Society is to provide clear illustrations of how resilience has been put into practice in concrete institutions. Here are some examples:

A further interesting dimension of this work relates to one of Brunnermeier’s ambitions: making sense out of the Covid-19 pandemic. Needless to say, this pandemic represented a major shock for everyone, a sort of event that the world has not experienced in probably two or three generations. The pandemic is still occurring, yet scholars are slowly starting to digest what happened. The Resilient Society is one of the first attempts to do so. Brunnermeier provides an account of what went wrong, what could have been done better, and how some measures helped societies to bounce back. I am afraid, however, that he might have rushed into conclusions. The book must have been finished in early Fall 2021 because there are no references to the Omicron variant, whose quick spread and strong resistance to immunity forced us to rethink several features that we thought we knew about the virus. Other relevant events are absent in the book: the war in Ukraine, the belligerent actions of Russia, or the severe global inflation. This is certainly not Brunnermeier’s fault. How could he know? Nevertheless, the impossibility of anticipating these major events reveals two things about the period of time in which the book was written. First, uncertainty was so high that we were unlikely to foresee the topics that were to occupy the main stage in the next few months. And secondly, some of the analyses offered were already outdated when The Resilient Society was at the printing press. Put simply, this book got old too quickly.

The pandemic is still with us, yet it has already shaken our understanding of political institutions. The Resilient Society, in this sense, is part of an incipient debate in social sciences. Brunnermeier takes a position about what the political lesson after the pandemic is: we must accept the occurrence of unpredictable shocks and build institutions that are self-stabilizing and do not require constant intervention. This is not a minor lesson; it directly opposes some of the major assumptions of the modern state. In this, this book joins a growing number of philosophers (Alexander Schaefer “Is Justice a Fixed Point?” American Journal of Political Science, forthcoming), political theorists (as previously mentioned, Ostrom, Aligica, or Tarko), and economists (2021, W. Brian Arthur, “Foundations of Complexity Economics,” Nature Reviews Physics 3: 136 – 45) who revisit the Hobbesian bases of the modern state and propose to replace stability and equilibrium with flexibility and adaptation as the foundations of political and social institutions. Yet, this is not the only way to interpret what we have learned during this pandemic. Other scholars draw opposing conclusions and argue that this major shock demonstrates that government intervention is necessary and legitimate to protect people’s lives. Ross Mittiga (“Political Legitimacy, Authoritarianism, and Climate Change,” American Political Science Review, forthcoming), for example, holds that the pandemic demonstrates that authoritarian policies are legitimate and beneficial during dangerous emergencies. From his perspective, we might be witnessing the end of liberal democracies and the resurrection of the legitimacy of authoritarianism in case existential threats—such as climate change—are not controlled quickly. The debate about the political lessons of the pandemic is just starting.

In sum, Brunnermeier makes important contributions to the practical understanding of institutional resilience. But, when it comes to making sense out of the Covid-19 pandemic and its lessons, The Resilient Society falls short of his ambitions. It seems that it is too early to understand what we just lived through. Whether the Covid-19 earthquake reshaped the very foundations of our political institutions, or whether it reinforced the convictions that political intervention is necessary to manage the increasing number of global emergencies, only good arguments will tell.

Mario I. Juarez-Garcia
University of San Diego
Culture and SocietyEconomic PolicyEconomyFederal Reserve and Central Banking
Subscribe Buy This Issue Get the App