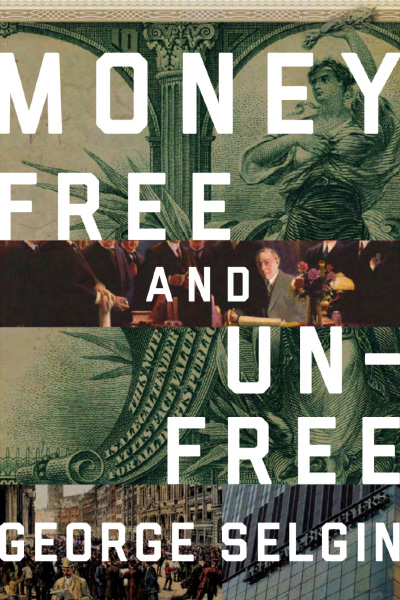 Money
Free and Unfree
By George Selgin
Kindle Hardcover
This book review is a web exclusive for the Winter 2017/18 issue of The Independent Review.

George Selgin has made a career, and a name, by asking and answering uncomfortable questions in the realm of monetary history and policy. Selgin’s contributions rest in questioning priors that most policymakers and fellow monetary economists hold without giving a second thought. Questioning priors is a significant way of making scientific process because it expands the borders of our understanding. In Money: Free and Unfree, the reader gets a glance at some of the most relevant contributions by Selgin in roughly the last three decades. Two challenges to monetary conventional wisdom underlie the whole book. First, central banks are in fact a source of financial instability and cannot (at least certainly not easily) outperform a free market of money and banking (i.e. free banking). Second, fractional reserve banking itself, and therefore banks, are not inherently unstable. This means that there is no need of a supervising body such as a central bank. Fractional reserve banking may be a channel through which a crisis spreads, but is not the source of the crisis. Rather, the source of the crisis is to be found in central banks and financial regulations.

The book is divided in three sections. Part I is about the regulatory sources of financial instability. Part II discusses the monetary and banking situation in the U.S. before the Federal Reserve. And Part III is about the Federal Reserve era. Part I is particularly timely since the effects of the 2008 crisis are still being felt. As soon as something goes wrong in the economy, then the default position by policymakers and the median voter is for the government to fix it. To fix the economy has a specific meaning, which is that the government needs to revise and increase regulations. The government doing more, rather than less, is the default position when it comes to money and banking. Selgin shows how the outcome of financial regulation is the opposite of its intention. Financial regulation contributes to, if it is not a cause itself of, financial instability. For instance, the last housing and financial crisis cannot be understood without a proper knowledge of how housing and financial regulation unintendedly colluded to produce a housing bubble.

Can Selgin’s claims be backed? They can. One way is to study how historical cases of free banking actually performed rather than how formal models that start with the assumption of inherent banking instability assume free banking would work. While this is not the main topic of this book, discussions of main issues on this topic are not lacking throughout the book. Other discussions are more upfront in this text. For instance, another way to support Selgin’s arguments is to show that financial crises before the Federal Reserve were due to ill-designed regulation and the outcome of fiscal policies. Restrictions on branching and the requirement that commercial banks hold treasury bonds as reserves do more to explain the pre-Fed financial crisis than picturesque wildcat banking stories and the assumption that banks are unstable. More empirical evidence supporting Selgin’s arguments is not far away. Selgin shows how Canada challenges the idea that free banking cannot accommodate money supply to money demand and self-contain bank failures. In fact, it can be argued that Canada without a central bank had more financial stability than the United States with the Federal Reserve. The lesson from this comparison is that United State would likely been better imitating Canada’s monetary regime than founding the Federal Reserve.

There is yet another way to back Selgin’s claims, which consists in not falling for the Nirvana fallacy. Namely, to compare real central banks, rather than ideal but nonexistent central banks, to real alternative monetary regimes. It is as easy and convenient as inappropriate to conclude that an ideal central bank can outperform a real world free banking regime. However, the relevant and interesting question is whether or not real central banks do outperform alternative monetary regimes. Chapter 8 shows, quite convincingly, that after a century the Federal Reserve has been unable to outperform the pre-Fed banking regime in the U.S. This result holds even after discounting the early “learning years” of the Fed. It is also interesting to note that this exercise shows that the Fed even underperforms a monetary regime that is far away from being a true free banking regime. Notwithstanding this situation, neither policymakers nor monetary economists even consider raising the question of what monetary reform can improve financial stability. Textbooks are flooded with what central banks can ideally do. But ink is rarely spared in discussing alternative monetary regimes.

Selgin’s work calls attention to a massive confirmation bias problem. Starting with the unquestioned assumption that banking is inherently unstable, formal models are designed in a way that would predict financial crisis. Then, historical cases of financial crisis are used to empirically support such models. This empirical support has two problems though. First, these cases do not represent free banking scenarios, but regulated scenarios. It cannot be concluded, then, that banks are inherently unstable. It is inaccurate and misleading, for instance, to refer to the U.S. pre-Fed era as a case of free banking. Second, the empirical evidence is incomplete. By only looking at failed cases of financial regulation, we are unintentionally choosing data that matches the priors of the models. A number of historical cases of free banking (Canada, Scotland, and Australia to just mention a few) show that money and banking can self-regulate. A significant part of the economic profession, however, seems to ignore this historical evidence rather than revise and question the models and priors of financial instability.

As Selgin (p. ix) argues, “the surprising truth is that most economists, including most champions of the monetary status quo (or something not far from it) are only vaguely familiar with alternative arrangements, assuming that they are aware of them at all.” Monetary history is an area where the average economist is not well informed. Selgin’s Money: Free and Unfree, is required reading for any scholar who wants to go beyond holding unquestioned premises.