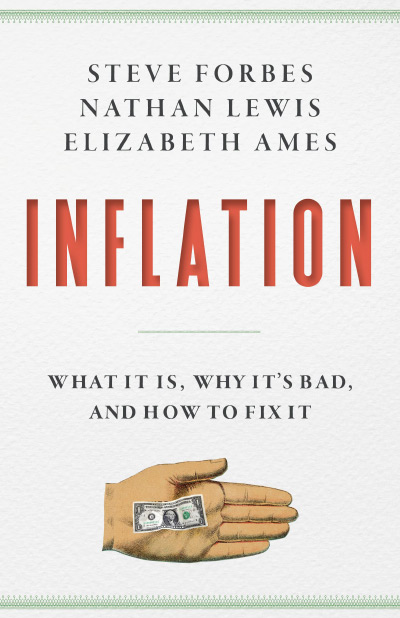 Inflation
What It Is, Why It’s Bad, and How to Fix It
By Steve Forbes, Nathan Lewis, and Elizabeth Ames
Kindle Hardcover Audiobook
This book review is a web exclusive for the Summer 2022 issue of The Independent Review.

Inflation is back. What is it? Why is it bad? How can we fix it? Steve Forbes, Nathan Lewis, and Elizabeth Ames—all seasoned financial commentators—are especially good at answering the second question, but their answers to the first and third questions are less well grounded.

Most economists (and almost everyone else) equate inflation with a general rise in the level of prices—as measured by the Consumer Price Index (CPI) or some other broad index of prices. However, Forbes, Lewis and Ames think this definition is inadequate. They suggest that the CPI understates the true rise in consumer prices, despite a general consensus among economists that it overstates the rise in the cost of living (see for example, Jerry Hausman, 2003, “Sources of Bias and Solutions to Bias in the Consumer Price Index,” Journal of Economic Perspectives 17, no. 1: 23 – 44). To what should we compare the value of a dollar in assessing inflation? They note that economists “look at various indicators. They compare the dollar to a basket of consumer goods and services (the CPI), commodity prices, other major currencies like the euro or the British pound or use other indicators. But, by far, the best one is gold” (p. 11).

Why gold? It’s not very clear. They suggest that “the yellow metal has long been used to gauge currency value because its intrinsic worth throughout history has remained largely unchanged” (p. 11), but it’s not clear that this is true. The things made out of gold, such as jewelry, are generally considered to be luxury goods—meaning that their demand rises strongly with income. Since the supply of gold is fairly inelastic, this means that its price—the value that people place on it—generally rises as demand rises due to rising incomes around the world. This is one reason why, according to the calculations of economic historian David Jacks (2019), the real price of gold has risen more rapidly than any other commodity since 1900 (“From Boom to Bust: A Typology of Real Commodity Prices in the Long Run,” Cliometrica 13, no. 2: 202 – 220, with updated data). Jacks finds that, although most commodities’ real prices have dropped since 1900, the prices of a few have risen more than the CPI—and the price of gold has risen the fastest, although petroleum is a close second. If gold’s “intrinsic worth throughout history has remained largely unchanged,” why has its price changed so much (risen so much) in comparison to everything else? Is it meaningful to talk about the “intrinsic” worth of gold and not, say, the intrinsic worth of beef or rice or steel or silver or any of the other commodities in Jacks’ study? The case for focusing on gold seems especially weak in light of the authors’ admission that “experts estimate that some 7 billion ounces [of gold] have been mined worldwide” throughout history (p. 11). As there are about 7.9 billion people alive, there is less than one ounce of gold per person out there. Most people don’t own any gold or have very little of it (perhaps a wedding ring), so why would it be the benchmark for the value of their money rather than the price of what they actually spend their money on from day to day and year to year—i.e., the things that are in the CPI itself?

The chapter on why inflation is bad is particularly effective because it draws on the experience of the 1970s. During the 1970s, the real tax rate on capital gains could easily exceed 100 percent—as an investor’s asset could rise in nominal value (triggering a tax) while falling in value after adjusting for inflation. A real loss could be taxed as a gain, adding one injury to another. According to an estimate of one of the authors “if you had bought an S&P 500 index fund in 1970 and sold it in 1988, the effective real capital gains tax rate on your investment would be 338 percent due to inflation during that period” (p. 57, emphasis in the original). Such tax rates severely distorted investment and hampered economic growth. However, the authors push things much too far when they suggest that the cause of slow economic growth beginning in the 1970s was the subsequent uptick in inflation. “During the gold standard years between 1950 and 1970, real GDP per capita grew by an annual rate of 2.77 percent. But over the past five decades, with a slowly declining fiat dollar, this growth rate has dropped significantly to 1.71 percent. What If We Had No Inflation? The answer is that we’d be a lot wealthier. If the nation had the same growth rate today as we did in the 1950s and 1960s, per capita income would be 72 percent higher” (p. 59). This passage omits the fact that there was persistent inflation in the 1950s and 1960s. The Bureau of Labor Statistics calculates a rise in prices of 61 percent from January 1950 to January 1970. In comparison, from January 1995 to January 2015, prices rose slightly less than this—about 55%. Apparently, low inflation—as low as under the Bretton Woods system—is possible under our current fiat standard. In addition, the causes of the drop in economic growth are manifold—with a slowdown in the rate of technological progress near the top of the list—and few economists would list inflation as a major cause of slower growth since 1970. The authors see inflation behind almost every imaginable historical ill, from witch trials in sixteenth century England to the rise of the regulatory state and the increase of political polarization in recent years.

How to stop inflation? The authors successfully critique band-aid solutions like price controls and effectively explain the solid track record of currency boards—linking a developing country’s currency to a more stable currency like the dollar or euro. However, as they see it, the “absolute best way to end inflation” is a gold-standard system—a move that is “entirely possible and far easier than many people think” (p. 90). If this were done, the Federal Reserve would lose its “dual mandate” and its task of curing unemployment with easy money. A 2008 survey asked members of the American Economic Association if they agreed that “the U.S. should return to the gold standard.” Among the 134 respondents, 90 percent disagreed with the idea (69 percent disagreed strongly), 6 percent were neutral and only 4 percent endorsed the idea (Ann Mari May, Mary McGarvey, and Robert Whaples, 2014, “Are Disagreements among Male and Female Economists Marginal at Best? A Survey of AEA Members and Their Views on Economics and Economic Policy,” Contemporary Economic Policy 32,no. 1: 111 – 132). Despite this, the strength of this chapter is in debunking common criticisms to the historical performance of the gold standard. However, the authors are least successful in rebutting the criticism that the gold standard caused the Great Depression—mainly because they barely scratch the surface of the literature on this question. They assert that the real cause of the Great Depression was the Smoot-Hawley Tariff. While most economic historians believe that this tariff exacerbated the Great Depression, few if any see it as the primary cause—with weaknesses in the banking system, missteps of the Fed, inflexible wages, and failure to follow the rules of the game of the gold standard generally given precedence.

The volume closes with investment advice for inflationary times, which is well worth reading. If their reading of history is correct, “[t]he good news is that, in the past, the end of inflation has meant a return to pro-market policies” (p. 121), as happened in Japan and Germany after World War II and in the U.S. and Britain under Ronald Reagan and Margaret Thatcher.