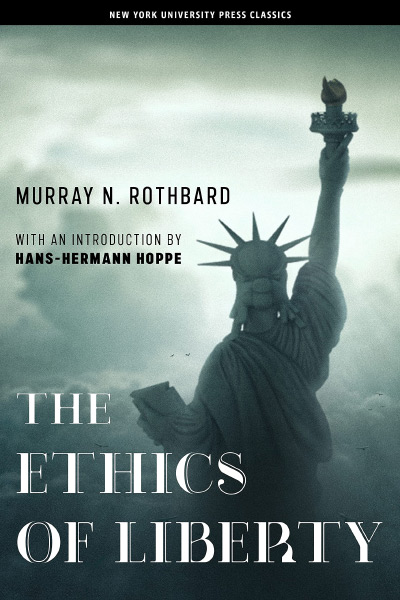 The Ethics of Liberty
By Murray N. Rothbard
Kindle Hardcover Paperback
This classic book review is a web exclusive for the Spring 2022 issue of The Independent Review.

To understand the significance of The Ethics of Liberty, the book must be situated within the total body of the author’s scholarly work. Like most economists, Murray Rothbard believed that economics is properly a value-free science. But he was also an ardent defender of a complete free market, untrammeled in any way by government interference with it. But if economics does not tell us that the free market is a “good thing,” what does?

To answer this question, Rothbard thought, we need to appeal to an objective science of ethics. Saying this put him at odds with many economists, who think that all “value judgments” are no more than expressions of subjective preference, but this did not faze him. As he says in the book, “One common, flip criticism by opponents of natural law is: who is to establish the alleged truths about man? The answer is not who but what: man's reason. Man's reason is objective, i.e., it can be employed by all men to yield truths about the world. To ask what is man's nature is to invite the answer. Go thou and study and find out! It is as if one man were to assert that the nature of copper were open to rational investigation and a critic were to challenge him to ‘prove’ this immediately by setting forth on the spot all the laws that have been discovered about copper” (p.10).

In what follows, though, I do not propose to concentrate on Rothbard’s development of this position but instead to emphasize a neglected part of the book, his responses to those who defended classical liberalism without appeal to the ethical system he accepted. Rothbard had a gift for objections, and if we attend to what he said in these responses, we will gain a better appreciation of the book. In all of these responses, he endeavored to show problems with views that took ethics to be subjective rather than objective, in the sense of the passage just quoted, i.e., that ethical judgments yield “truths about the world.”

One of the most important of these responses addresses the “Unanimity Principle” to which many mainstream economists appeal. In this basic principle of “welfare economics,” it is contended that even in the absence of an objective ethics, the economist can identify changes that count as improvements in a value-free sense. As Rothbard explains, “the Unanimity Principle . . . [is] based on the criterion of ‘Pareto optimality’ that a political policy is ‘good’ if one or more people are ‘better off’ (in terms of satisfying utilities) from that policy while no one is ‘worse off.’ A strict version of Pareto optimality implies unanimity: that every person agrees to, hence believes that he will be better off or at least no worse off, from a particular government action” (p.203). (This is slightly misstated, although Rothbard has the essence of matter correct. A change that garners unanimous support is Pareto superior, and if no such change can be made, the situation is Pareto optimal.)

Rothbard objects that it does not follow from the Unanimity Principle that the “improved” state of affairs fulfills the requirements of justice. Unless the starting point is morally acceptable, we have no reason to think that it will: “The Unanimity Principle has great attractions for ‘value-free’ economists eager to make policy judgments, for far more than in the case of mere majority rule; surely the economist can safely advocate a policy if everyone in the society favors it. While the Unanimity Principle may at first appear superficially attractive to libertarians, however, there is at its heart a vital and irredeemable flaw: that the goodness of free contracts or unanimously approved changes from the existing situation depends completely on the goodness or justice of that existing situation itself. Yet neither Pareto Optimality, nor its Unanimity Principle variant, can say anything about the goodness or justice of the existing status quo, concentrating as they do solely on changes from that situation, or zero point” (p. 203). One might object that even if a Pareto superior move does not result in a just outcome, it is at least an improvement on the justice of the situation; but this is open to counterexamples. Suppose, for instance, that the commandant of a concentration camp introduces machines that will increase the ability of the slave laborers to produce poison gas but that do not increase the burden of their labor. The commandant prefers this outcome, and the slave laborers are no worse off, so the change counts as a Pareto improvement, but we have not moved closer to justice.

Rothbard applies this criticism to the thought of James Buchanan. “Buchanan, admitting that his idea of ethics is one of purely subjective and arbitrary ‘notions,’ is yet willing to promulgate what can only be an equally subjective and arbitrary notion on his own grounds—a defense of the status quo. Buchanan concedes that his procedure: ‘does allow me to take a limited step toward normative judgments or hypotheses, namely, to suggest that the changes seem to be potentially agreeable to everyone. Pareto efficient changes, which must, of course, include compensations. The criterion in my scheme is agreement’” (p. 205).

Buchanan readily acknowledged that his version of the Pareto Principle started from the status quo, but he saw no alternative to this: “In a fascinating exchange with a critic of the Unanimity Principle, Professor Buchanan concedes that ‘I am defending the status quo. . .not because I like it, I do not. . . . But my defense of the status quo stems from my unwillingness, indeed inability, to discuss changes other than those that are contractual in nature. I can, of course, lay down my own notions. . . . But, to me, this is simply wasted effort’” (p. 205). In response, Rothbard makes a fundamental point: if one considers all ethical judgments subjective, one cannot conjure out of those subjective preferences a judgment that counts as objective or quasi-objective: “But what is the justification for this ‘limited step’? What's so great about agreement on changes from a possibly unjust status quo? Isn't such a limited step also an arbitrary ‘notion’ for Buchanan? And if willing to proceed to such an unsatisfactory limit, why not go still further to question the status quo?” (p. 206).

It is perhaps useful to develop Rothbard’s point further. Buchanan would respond to Rothbard in this way: If someone were to reject the results of a unanimous agreement in favor of his own opinion that some different outcome was ethically better, he would be elevating his own preferences in an unacceptable way from those of everyone else. (We assume that the person who does this is an outside observer or judge, as otherwise, there would have been no unanimous agreement.)

This response, it should be evident, begs the question. Because all ethical judgments are subjective, to single out one’s preference, it is claimed, manifests arrogant presumption; but that need not be true if the judgment is objectively true, which is indeed the issue under discussion. In addition, Buchanan would seem to be relying on an implicit “democracy of preferences” assumption. If all value judgments are subjective preferences, then one is as good as another, Buchanan thinks: but that is also a subjective preference, not an objective judgment. As Rothbard asks, speaking of utilitarian ethics, “Secondly, what is the justification for each person counting for one? Why not some system of weighting? This, too, seems to be an unexamined and therefore unscientific article of faith” (p.202).

Rothbard criticizes another “value-free” defense of the free market, one which was much more consequential to him personally, as it was that of his mentor Ludwig von Mises. According to Mises, almost everyone wants peace and prosperity. It can be shown by strict value-free economic analysis that interference with the free market fails to attain the ends its proponents claim for it. Price controls, for example, do not make goods available to the poor at low cost, but in fact cause shortages, making fewer goods available to the poor. That being so, the following hypothetical imperative is true: “If you want prosperity, do not interfere with the free market.” That is no more a value-judgment than “If you want to avoid lung damage, do not smoke.”

Rothbard did not think that Mises had successfully offered a value-free defense of the free market. He raised two main objections to it. First, the supporters of intervention might have goals in mind other than peace and prosperity for all. They may wish to advance the economic interests of a small group or to enhance their own power. “Now this is surely an ingenious attempt to allow pronouncements of ‘good’ or ‘bad’ by the economist without making a value judgment; for the economist is supposed to be only a praxeologist, a technician, pointing out to his readers or listeners that they will all consider a policy ‘bad’ once he reveals its full consequences. But ingenious as it is, the attempt completely fails. For how does Mises know what the advocates of the particular policy consider desirable?. . . . Thus, Mises, qua economist, may show that price control (to use his example) will lead to unforeseen shortages of a good to the consumers. But how does Mises know that some advocates of price control do not want shortages? They may, for example, be socialists, anxious to use the controls as a step toward full collectivism. Some may be egalitarians who prefer shortages because the rich will not be able to use their money to buy more of the product than poorer people” (pp. 207–208).

Second, Mises’s argument shows that, over time, interventionist measures will not work. But this does not lead to the policy prescription of avoiding such measures unless one assumes that people should prefer their long-run interests to their immediate gratification. “But, in that case, what about the high-time-preference people in society who may retort to the praxeologist: ‘perhaps this high tax and subsidy policy will lead to a decline of capital; perhaps even the price control will lead to shortages, but I don't care. Having a high time-preference, I value more highly the short-run subsidies, or the short-run enjoyment of buying the current good at cheaper prices, than the prospect of suffering the future consequences.’ And Mises, as a value-free scientist and opponent of any concept of objective ethics, cannot call them wrong” (p. 209).

From the standpoint of an objective ethics, the significance of Mises’s argument can be challenged in another way. Suppose that the argument on its own terms succeeds entirely and that we set aside the two objections Rothbard has raised to it. It would have to be shown that a state of general prosperity is ethically better than one of poverty. I do not question that it is, but an objectively true ethical judgment and a subjective value judgment, however much generally accepted, are two very different things. (One theory of objective ethics might claim that unanimously accepted judgments are, under certain conditions, objectively true; but this position would leave my assertion untouched.)

In calling attention to this topic in The Ethics of Liberty, I have endeavored to pay tribute on the fortieth anniversary of its publication to a book that has meant a great deal to me.

[Author’s note: I knew Murray Rothbard very well and am mentioned in the book’s acknowledgements. At his request, I suggested a few notes that he used in the book.]