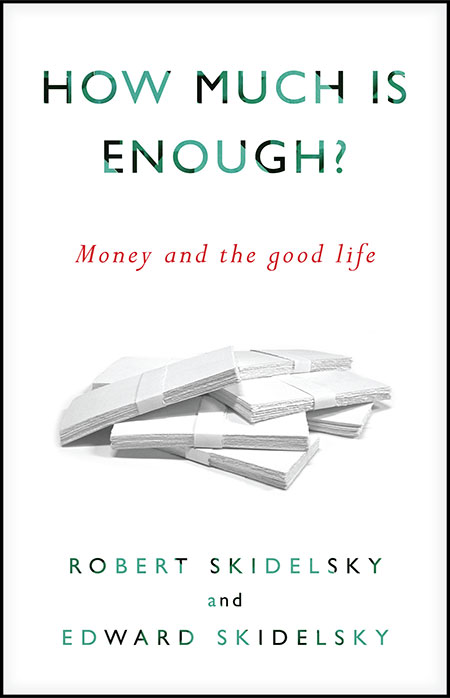 How Much Is Enough?
Money and the Good Life
By Robert Skidelsky and Edward Skidelsky
Kindle Hardcover Paperback Audiobook MP3 CD
This book review appeared in the Spring 2013 issue of The Independent Review.

Robert Skidelsky is the renowned author of an admiring multivolume biography of John Maynard Keynes; his son Edward is a moral philosopher. Together in How Much Is Enough? they seek to define the prerequisites of “the good life” and to explain why the capitalist system of advanced industrial states militates against its achievement. Drawing heavily on Aristotle but providing also a learned survey of two millennia of ethical thought, they propose a list of indispensable basic goods that every rational individual requires. Those goods include health and vitality, though not necessarily longevity; respect from one’s fellows, which may imply personal achievement; ties of affection and friendship; harmony with nature; security from major economic or social upheaval; autonomy to design a life of one’s choosing; and sufficient leisure to undertake activity for its own sake rather than because it generates income. A beneficent state can create the material conditions in which the basic goods are produced, but the goods themselves are not primarily economic. Although people in middleincome countries tend to have more life satisfaction than those in poor countries, wealth above a certain level does not correlate in any straightforward way with happiness, however one defines that elusive concept. In fact, the Skidelskys argue, the quest for economic growth under capitalism creates an insatiable demand for superfluous material goods that advertising induces people to want in place of those they need. This system is morally repugnant: it promotes greed, envy, and avarice; it offends our sense of justice; and it leads us away from the good life.

The Skidelskys take as their starting point John Maynard Keynes’s famous 1930 essay “Economic Possibilities for Our Grandchildren.” Keynes pointed out that living standards in developed countries had increased fourfold since 1700. At the projected growth rate, they would multiply another eight times over the next century. At that point, the distributive conflicts between classes and nations will end. No longer feeling the pressure of economic necessity except to arrange the just distribution of resources and avoid technological unemployment, his compatriots will be able to reduce the working day to three hours and devote themselves to the creative use of leisure and the deeper problems of life.

This jeu d’esprit reveals a great deal about Keynes’s fundamental attitude toward capitalism. He had little faith in Adam Smith’s vision that the common good emerges through the workings of individual self-interest in a competitive marketplace. True, the free market fosters economic growth, but growth in Keynes’s view does not always equate with progress. Meanwhile, capitalism encourages mankind’s worst instincts: acquisition without limits, striving without a point. Keynes considered avarice a vice, the exaction of usury a particular offense of the Jews, and the love of money a semicriminal and semipathological morbidity. No wonder he later proposed in The General Theory that the state should guide the propensity to consume through taxation and the socialization of investment—not eliminating the private sector, but reducing it to its just proportions. This approach reflects the deeply held preferences of the segment of the liberal leisure class and literati to which Keynes belonged— preferences that the Skidelskys appear to share. In the era of bliss a century hence, such distortions of moral values will seem counterproductive. Keynes believed that people who renounced insatiable consumption should be able to get along on $66,000 annually in current terms (a Gordon Square townhouse, a country home, and Eton school fees presumably not included).

Eighty-odd years after Keynes wrote, average income in developed countries has grown precisely as he predicted. Yearly working hours have fallen somewhat, but far less than he anticipated. Americans still labor almost 1,800 hours, and the Russians, with lesser efficiency, around 2,000. Only the welfare states of “Old” Europe have reduced average hours at work to less than 1,400 per annum. Moreover, the refined leisure class of Keynes’s day, which drew income from land and Consol bonds, has largely disappeared. Today, people at the top of the income pyramid tend to be harried professionals selling their hard-earned expertise, and they put in a longer work week than those at the bottom. Why has the three-hour day of Keynes’s utopia failed to arrive?

A number of economists before the Skidelskys have tackled this problem, and they give varied explanations. (See Lorenzo Pecchi and Gustavo Piga, eds., Revisiting Keynes: Economic Possibilities for Our Grandchildren [Cambridge, Mass.: MIT Press, 2008]). Keynes, they say, underestimated the pleasure and sense of achievement involved in skilled work, particularly because technologically advanced societies provide more opportunity for creative and stimulating tasks than traditional ones. He also underrated the importance of innovation and the product cycle in creating nonpathological new consumption demands. Advanced medical care, labor-saving devices, and qualitative improvements in communication and transportation do not simply allow people to engage in the purposeless Veblenite display that Keynes deprecated; they do (or at least can) improve the quality of life for all. Moreover, living through England’s depressed economy in the 1920s, where operatives in the old staple industries often faced technological unemployment, Keynes could readily imagine something like John Stuart Mill’s stationary state, in which economic advance in the private sector wound down and the citizenry obtained gratification through moral improvement and harmony with nature. No wonder Keynes thought it a distortion of judgment to postpone current pleasures for the sake of future satisfaction. People living in a dynamic, high-growth societymight rationally elect different trade-offs.

The Skidelskys, at any rate, push Keynes’s argument to its logical conclusion. Western civilization, they contend, made a Faustian bargain with the demons of avarice and usury. They agree with Keynes that, lacking an opportunity for money making, the most dangerous human proclivities might have found an outlet in cruelty and the pursuit of personal power. Having lifted man out of poverty, however, the demons were supposed to depart. Alas, they have not done so. In Goethe’s rendition of the Faust legend, he who lives to strive can earn redemption. In the Skidelskys’ more sinister version, we have achieved abundance through economic growth, but the habits bred into us by capitalism make enjoyment of our good fortune impossible.

Most labor, they claim, remains “stupefying.” People work out of fear or insecurity, and consumerism offers “a sop to workers deprived of the leisure they crave.” By monetizing the economy, capitalism broadens status competition and renders money the measure of all things. Moral constraints vanish. No matter how many “useless and mind-numbing” things people acquire, they always want more (if not material baubles, then positional goods in limited supply, such as seaside cottages and admission to certain clubs). Advertising, the organized creation of dissatisfaction, keeps this pernicious system going. The Skidelskys also attach much blame to the discipline of economics. Economics privileges the optimum use of resources or maximization of the utility function, but it fails to instruct us on the uses of abundance. The development of national income statistics focuses our thinking on efficiency and maximum output at the expense of higher values.

In short, the market economy crowds out basic goods. This conclusion would have astonished Adam Smith, who as a follower of the Physiocrats deplored the lack of productivity by the rich as much as the indiscipline of the poor. The Skidelskys see themselves also as moral reformers, although in the opposite direction from Smith. They remain properly agnostic on the question of whether the environment is deteriorating and mankind will eventually deplete the planet’s finite resources. However the scientific evidence turns out, they insist, the further pursuit of wealth is “madness” and “inherently undesirable.”

In the Skidelskys’ cosmology, the state stands as the embodiment of the common good. Keynes’s demand that the state maintain enough aggregate demand to make full use of resources constituted at bottom an “ethical project.” The New Liberals and social democrats combined in the thirty-five years after World War II to provide full employment, redistribution of wealth, women’s rights, advances in health, and all manner of other social services. Keynesian economics created the age of abundance. Unfortunately, the moral reformers gradually lost out to critics who, ignoring the precepts of the good life, claimed that lessening the incentives to work and save created inefficiencies. When Margaret Thatcher and Ronald Reagan came to power, capitalism entered its “degenerative phase.” Keynes’s notion of satiety lost its appeal, and the distribution of income became ever more skewed in favor of the “predatory plutocracy.”

In order to counter those trends, the Skidelskys offer a comprehensive program of what they describe as “non-coercive paternalism.” The providential state can employ economic persuasion through tax incentives and penalties to encourage citizens to lead the good life. The state must first define “reasonable standards of comfort” and redistribute resources to achieve it. It then must make an “ethical judgment” about what sort of goods the private market should be allowed to supply. No one, for example, “needs” tobacco or a second car. Progressive consumption taxes can reduce conspicuous consumption to the level that the “community” finds desirable. Rentiers will have no choice but to save and invest their remaining income. The state can employ the resources thus released for “inconspicuous consumption”—better air quality and parkland, enforced vacation and leisure time, even freedom from traffic congestion. Capital taxation, meanwhile, will reduce social discontent. The state can discourage advertising by ending business write-offs for it, and it can delicately reshape the economy through targeted imposts on specific business sectors. Because much financial innovation is “socially useless,” the banking sector seems a good place to start. Under the Skidelskys’ model, international trade finance becomes in any event superfluous. Holding that inefficient domestic manufacturing remains preferable to factory closings, they propose to ban competitive imports from low-wage countries and to substitute unilateral grants-in-aid on Christian principles instead.

On the positive side, the Skidelskys suggest that the state provide a capital endowment or basic income so that each citizen can freely decide whether to work or not. Such a scheme opens the door to further social engineering. The authors approve of expenditure on education, but they want the state to educate broadly for cultivated leisure rather than to transmit marketable skills.

The nineteenth-century romantic poets took a comparably dim view of industrialism and its social consequences. “Getting and spending,” wrote Wordsworth, “we lay waste our powers.” Yet the Skidelskys add an inventive social democratic twist to their own version of dystopia. If the object is to fashion an iron cage of disincentives for economic growth, their program certainly will do the job. Lady Thatcher apparently does not attend the House of Lords any more. Nevertheless, one cannot help wondering whether Baron Skidelsky, as he bestrides the Palace of Westminster, ever recalls what she said about the trouble with socialism: eventually you run out of other people’s money.