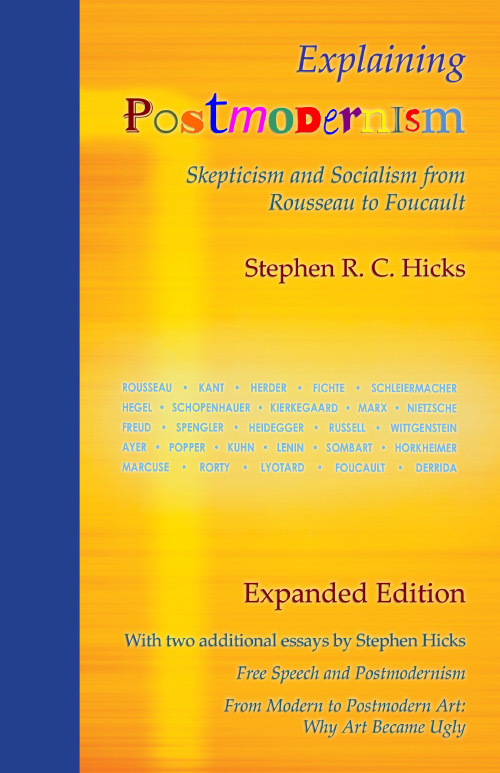 In Explaining Postmodernism, Stephen R. C. Hicks seeks to explain the nature of contemporary anticapitalist movements, giving particular attention to their potential origin in modern thought. He attempts to demonstrate the way in which “postmodern” ideas have more illustrious roots in the Western intellectual tradition than one might expect—to the detriment of that tradition. As the subtitle suggests, he marks Rousseau as a notably significant historical origin in this regard. However, he rightly takes his more interesting thesis to lie in his placement of Kant as the father of the “Counter-Enlightenment” and so of “postmodernism.”

This is of course a very postmodern way of looking at Kant, once we understand the term relative to Hicks’s placement of Derrida in the postmodernist camp. However, one should not get the impression that Hicks wanders into thickets of poststructuralist philosophical poesy or the like. His account aims to present cut-and-dried thinking—which is overrun only occasionally by bursts of vaguely Russellian rhetoric aimed at the Teutonic intellectual tradition, along with a few similarly more-florid musings on Nietzsche and Duchamp.

Explaining Postmodernism builds up to the analysis of contemporary strategies of the left that deviate from the orthodox Marxist and other class-centered modes of thought. Hicks seeks to trace these postmodern strategies to a line of intellectual history that comes to the fore with Rousseau, blossoms with Kant—and here Hicks shows some admiration for Kant’s deftness in turning the received Enlightenment tradition on its head—and then continues with Herder, Fichte, Hegel, Nietzsche, Kierkegaard, Foucault, and Derrida. Central to his analysis is the claim that the left, feeling itself to have utterly failed to achieve its goals at the level of the real means of production, responded with a denial of reality. Hicks views this denial of reality as licensed by the idealist elements in Kant’s thinking, as subsequently developed in Foucauldian antihumanist relativism and in Derridean textocentrism.

One can see how this line of argument might have some traction: many Derrideans, for example, do tend to reduce social life to the interaction of poetically manipulable signs and marks that have no fixed mooring in the Enlightenment goods that Hicks champions. Central goods of this kind are material prosperity, technological prowess, and reasoned self-understanding. The Derridean might place these types of goods within a “labyrinth of signs” having no grounding in the Logos or other candidate for what is Echt, where the mesh of discourse formed can be changed so as to allow the sign-user to find libidinal satisfaction through other methods of approach toward the material and the rational than are coherent for the Enlightenment subject. The Foucauldian might give a similar type of analysis but focus more on the links between power, discourse, and the body. The upshot of both lines of thought is to minimize pursuit of Enlightenment goods in themselves in favor of changing our discursive approach to them. To give an example: rather than working to bring about greater economic equality as measured in pecuniary terms, the Derridean activist might seek to change subjects’ discursive stance on the importance of wealth, so as to downgrade the feelings of accomplishment and self-worth that attach to acquiring wealth. This change might then be cast as a move toward greater equality between the haves and have-nots.

Refreshingly, Hicks does not take it as given that these poststructuralist view-points have been demonstrated to be in error. Rather, he seeks to trace them to a powerful ressentiment directed against the partisan of the Enlightenment and of capitalist achievement. At the same time, he seeks to identify the historical roots of these viewpoints, to provide the Enlightenment thinker with openings for serious intellectual engagement.

Alas, the fingerprints Hicks discovers seem to be somewhat blurred. Kant and Hegel both appear drawn in caricature. Kant, because he denies that the subject has Wissen of the ultimate nature of reality, is taken simply to deny that knowledge of reality is possible. Kant’s views on the positive outgrowth of negative events, such as war? War is simply “good,” and the individual is “merely” valuable as part of the out-working of history. And, as always, things are somewhat murkier with Hegel, but one must note that Hicks goes decidedly awry in casting the state as the be-all and end-all of Hegelian dialectical movement. Hegel cannot be claimed to be the crude state worshiper that Hicks presents him as, outside the context of a much more involved reading than it would be possible to give within the scope of a work such as Explaining Postmodernism. Hegel’s thinking moves in many directions, and this reality ought not to be obscured through facile placement of the Hegelian dialectic within a skeletal account of Prussian nationalism.

Although Hicks’s reading of Rousseau is likewise not appreciably nuanced and makes little allowance for the ironic and contradictory elements in Rousseau, his straightforward approach may be generally appropriate if one takes Rousseau seriously as a contemporary interlocutor. In any case, here, as with Kant and Hegel, Hicks’s account moves along at a brisk yet very readable pace, with much clarity of meaning even for those fairly new to the study of the Western traditions under study. This achievement would likely not have been possible with a more “deconstructive” approach to Rousseau.

However, students with little knowledge of modern philosophy who are likely to be swayed by Hicks’s readings of key modern figures are decidedly not a proper audience for this work, except outside the context of a classroom setting where Hicks’s views can be challenged in an informed fashion. His reading of Kant, Hegel, and others sacrifices too much in depth for a simple, “on message” presentation. The best audience for this work would be undergraduates in an appropriate classroom setting and those likely to be skeptical of or decidedly in disagreement with Hicks’s reading of Rousseau, Kant, Hegel, and others, but who may benefit from the articulation of opposition to contemporary leftist strategies and tactics that Hicks presents from a libertarian perspective (with definite Objectivist shadings).

In painting his picture of the contemporary left, Hicks makes a notable contribution in focusing on activists’ tendency to use sets of contradictory propositions and other linguistically embedded thought forms as part of a “priestly” will-to-power. Here, in invoking Nietzsche and his analysis of the origins of the Judeo-Christian “slave morality,” I parallel Hicks, who seems to have some Echt fellow feeling for the dead white male in question. He puts it to good effect in examining the baleful power of illogic, and in his aforementioned and somewhat less-novel account of ressentiment among the “French Nietzscheans” and their Nachfolgers, his straightforward approach may be generally appropriate. It is therefore a pity that such appropriations of Nietzsche are not attached to a more accurate presentation of the history of Western philosophy.