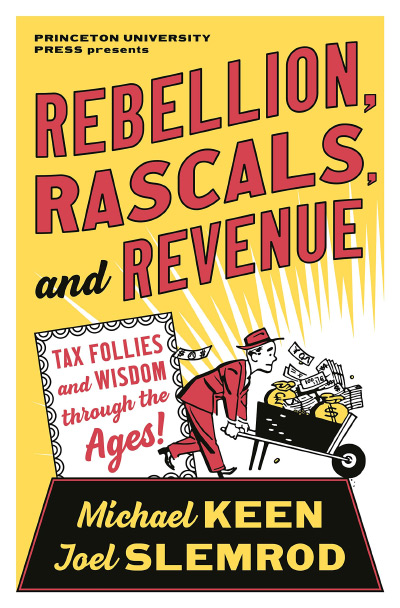 Rebellion, Rascals, and Revenues
Tax Follies and Wisdom through the Ages
By Michael Keen and Joel Slemrod
Kindle Hardcover Paperback Audiobook Audio CD
This book review is a web exclusive for the Winter 2021/22 issue of The Independent Review.

Rebellion, Rascals, and Revenues: Tax Follies and Wisdom through the Ages is a masterful compendium of not just fiscal history, but social history throughout the ages. As Keen and Slemrod note, Joseph Schumpeter remarked that, “The spirit of a people, its cultural level, its social structure, the deeds its policy may prepare—all this and more is written in its fiscal history, stripped of all phrases” (p. 1). Indeed, the tax stories that the authors use throughout the book illustrate social conflicts among different groups throughout the ages, all of which had one thing in common—they used a tax, whether direct or indirect.

The book is divided into five parts by issues rather than by country, region, or time. I appreciate this organization and find it to be superior to a similar book For Good and Evil: The Impact of Taxes on the Course of Civilization, by Charles Adams (2001, Oxford: Madison Books), that examined the tax history by time periods and regions. By organizing the book by issues, the authors eliminate a lot of redundancy and are able to derive commonalities among different issues in different times and places. Although I appreciate this organization as a reader of the book, as a reviewer of the book the organization makes concisely summarizing the copious amount of detail in the book a bit difficult. As such, I focus more on the broader commonalities of each section and cherry-pick different stories that are in each section.

The first part of the book discusses what the authors call the “unchanging tax truths” (p. xvii), or what an economist could call theoretical or general “laws.” In particular, the authors discuss the laws of how governments try to make people fund their revenues, and how people have tried to avoid paying for them. One of the most interesting stories from this section is the Boston Tea Party. Namely, while most people believe that the event of the Boston Tea Party was due to a tax increase, there was actually a tax decrease.

Indeed, the authors state that the tea was reduced by 6 shillings per pound (p. 9). What this tax decrease did, however, was impact the revenues of smugglers. Before the tax decrease, colonists would have to pay a duty on tea imported from Great Britain. Smugglers were able to purchase the tea, avoid the duty, and then sell the tea cheaper to the colonists. But, with the duty removed, the colonists could buy the tea directly from Britain. Smugglers were no longer needed, and their revenues sank. One of the most prominent Boston smugglers was John Hancock—one of the leaders of the Boston Tea Party.

The second section discusses issues of tax “fairness.” These issues are divided into “vertical equity”—the fairness between the rich and poor—and “horizontal equity”—or fairness on aspects such as gender, location, religion, or nationality. Vertical equity is discussed in chapters 4 and 5, and horizontal equity was discussed in chapter 6. This is my favorite section, as the stories logically build on those from the previous section to give credence to more general laws. Namely, governments try to obtain as much revenue as they can to pay for things they want. But, overtaxing has limits for the durability of a government. Overtaxing can lead to revolts like the Whiskey Rebellion—which the authors discuss in chapter 1—or Queen Boudicca of Iceni’s army burning Colchester and London to the ground during an uprising against the Roman Empire (p. 83-84). As such, governments have to find some optimal point between maximizing revenue and being fair.

This leads to the second law—people will try to avoid paying taxes and will push them on others. As the section is titled, there will always be “winners and losers” to a tax. Indeed, as the authors describe throughout the various stories of chapter 6, taxation, stripped down, is really about the struggle of conflicting interest groups trying to pay the least. The appeals to “fairness” are really simply ideologies to justify their claims—a point that other scholars (in particular, Louis Eisenstein, 1961 [2010], The Ideologies of Taxation. Cambridge: Harvard University Press; and Richard A. Wagner, 2018, “The Language of Taxation: Ideology Masquerading as Science” in For Your Own Good: Taxes, Paternalism, and Fiscal Discrimination in the Twenty-First Century, edited by Adam J. Hoffer and Todd Nesbit, 77–96. Arlington: Mercatus Center) have made.

An example of people wanting to pay less and providing justifications is illustrated by the authors in chapter 6. Specifically, the authors discuss how diarist Samuel Pepys of seventeenth-century Britain was mistakenly charged less than that which he owed in taxes. Rather than correcting the mistake, he asserted “I think I am not bound to discover myself” (p. 99). This story is relevant for today, when many people of higher income classes—including some politicians—assert they want the rich to pay their “fair share,” but they, themselves, pay less than do lower income classes.

In sum, the stories in this section illustrate that there is no universal definition of tax fairness. They are different for each individual. The same can be said about tax incidence—where the burden of a tax falls—that the authors take up in chapter 7: such incidence depends on an individual’s relative elasticity, which is different for each individual. This brings us to the third section.

The third section of the book discusses how individuals respond to taxes designed to change their behavior. As described above, each individual can respond differently to the same tax due to the differences in each person’s elasticities. In addition, people can find creative ways to avoid paying taxes. While the authors did not say this, such creativity is due to humans’ innate entrepreneurial spirit (Israel M. Kirzner, 1973, Competition and Entrepreneurship. Chicago: Chicago University Press).

The authors provide an example of this entrepreneurial spirit in avoiding taxes in chapter 8. Specifically, some countries had the goal of incentivizing families, so they taxed bachelors. However, recognizing that some women just didn’t want to get married, these countries provided exemptions for men who could prove they were rejected by women. As a result, in early twentieth century Argentina, a market of “professional lady rejecters”—who were paid to reject men and provide men with proof they needed for tax exemption—started. Talk about being alert and discovering a profit opportunity!

The fourth section discusses tax collection—and warrants two stories from the authors. First, taxes are easier to collect from big businesses as opposed to small businesses. In fact, while only 0.055% of corporations are considered “large” in the United States, such large corporations made up 70% of corporate tax revenue in 2013 (p. 298). Second, some governments use tax authorities to help friends and harass enemies. For example, the authors explain how Richard Nixon stated “I want to be sure ... that [the IRS commissioner] will do what he’s told, that every income tax I want to see I see, that he will go after our enemies and not go after our friends. If he doesn’t, he doesn’t get the job” (p. 328).

The fifth and final section discusses some lessons for tax design in practice, with real-world examples. The book then ends with some predictions about how future peoples will look back on our tax follies. It is in this section where I can discuss my two minor criticisms of the book.

The first is more of a tension. While the authors repeatedly discuss the difficulty in designing taxes as they appear on the blackboard—namely because of the way groups use ideologies to gain power at the expense of others—they also repeatedly refer to criteria economists find for “good” tax design. To me, this seems like a contradiction. Taxes cannot be a tool of “power and plunder” and, at the same time, be able to be designed well.
My second critique might help with this tension. Specifically, while I really enjoy the tax history throughout the book, I find myself wanting more theoretical foundations. To be sure, the authors do discuss theoretical concepts such as optimal taxation, excess burden, efficiency, equity (vertical and horizontal), and the like. Indeed, they mention—as I stated above—how some of these theoretical tools don’t explain the history well. However, in claiming that a tax system can be designed by economists in some optimal way, they seem to accept the same theory they critique.

To me, this stems from a philosophical difference in public finance as outlined by Nobel Laureate James M. Buchanan, in his paper “The Pure Theory of Government Finance: A Suggested Approach” (1949, Journal of Political Economy, 57(6): 496-505). In this paper, Buchanan distinguishes between an organismic and individualistic State. The former sees the State as one organized entity acting on the economy; the latter sees the State as the individuals and the interactions of the individuals within that State. The authors, in asserting that there can be optimal tax design, seem to take the organismic perspective, despite their intuitions that the individualistic view is closer to taxation in democratic republics. If the authors would focus on theoretical foundations like Buchanan, they might have eliminated this tension.

Despite these criticisms, I believe this book offers a legion of future research projects. The first stems from the critiques above. One could use one of the many, many stories the authors provide in this book to elucidate an individualistic theory of how a tax was established as a means of striving for power. Additionally, the authors’ discussion of “cash flow taxes” provides a fruitful research project for scholars looking at the entanglement between political and market actors, in the line of Wagner (2016, Politics as a Peculiar Business: Insights from a Theory of Entangled Political Economy, Northampton, Mass.: Edward Elgar). Specifically, the authors note that “cash flow taxes” effectively make government a “silent” investor in businesses’ investment. As such, it is an empirical question whether this tax scheme was created to benefit, or unintentionally benefits, government favorites.

There are more of these fruitful research questions sprinkled throughout the book. As such, I recommend this book to other scholars—both as a means to understand the complexities of our world’s tax history, but also to take advantage of the reduced information (in terms of research questions) costs with which the authors have provided us.