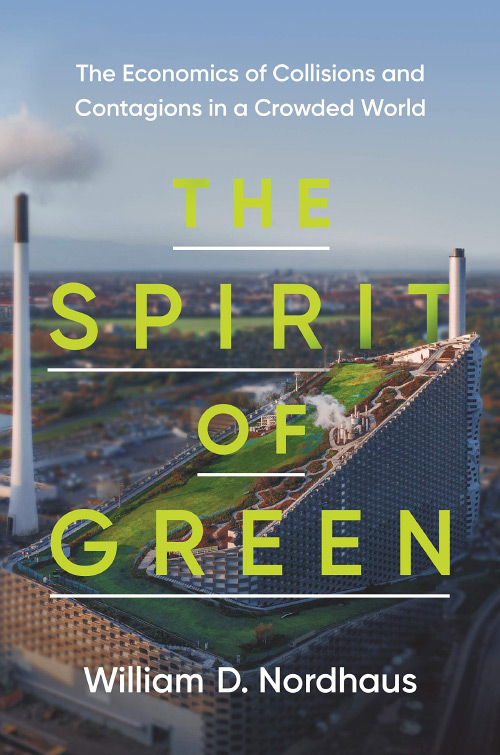 The Spirit of Green
The Economics of Collisions and Contagions in a Crowded World
By William D. Nordhaus
Kindle Hardcover Paperback Audiobook
This book review is a web exclusive for the Summer 2021 issue of The Independent Review.

William Nordhaus’s aim in The Spirit of Green seems to be to convince “greens” that they need to harness the power of markets and to convince “browns” to go green. The heart of being green, as he sees it, is to make individuals answerable for their environmental actions—making polluters pay for the damages they inflict, especially by making them face prices that equal their true costs. This is a message that will appeal to almost anyone, especially economists.

Nordhaus, who won the Nobel Prize in Economics in 2018 for his work on climate change, has a gift for explaining things clearly to the uninitiated. Given his previous work, in books like The Climate Casino: Risk, Uncertainty, and Economics for a Warming World (New Haven: Yale University Press, 2015), it is no surprise that the book builds toward an argument favoring a uniform tax on carbon dioxide emissions starting around $40 per ton. To the green audience, he is honest in explaining that this tax is unlikely to reduce greenhouse gas emissions enough to satisfy their desires. He argues that the goal of zero net carbon emissions is foolish—since the marginal damages of carbon emissions aren’t sky high. How big is the challenge of reaching zero net emissions by 2050? “The short answer is that it is somewhere between highly unlikely and infeasible” (p. 215) is Nordhaus’s blunt reply. He is certain that climate change will have important negative impacts, so this would be a natural place for him to discuss adaptation. However, he declines to do so. Perhaps he is afraid he will lose credibility with his green audience if he does so. However, the book is a calculated balancing act, so he risks losing those who don’t identify as green as a result.

In laying out a spectrum from “Deep Green” to “Muck Brown,” Nordhaus places himself only a little left of center, closest to free market environmentalism. With the aim of allying with free market environmentalists, the book culminates with the musing of a “hypothetical environmentally oriented conservative” (that would be me) on climate-change policies. Much of these musings ring true: “I desire a political and economic system that is efficient, equitable, and has maximum individual freedom. ... I also desire to leave a better world for my children and grandchildren. ... I don’t think that anyone should be allowed to despoil the earth at other people’s expense.” Unfortunately, the evidence on the impact of rising greenhouse gas levels is murky “because we are projecting uncertain climate projections on rapidly changing future societies.” So far so good. “But,” the musings continue, “I find the projections unsettling. I might have a fine beach house and read that it is likely to wash into the sea” (p. 310–11). Oops, he lost me there. Very few beach houses are washing away and the climate science projections say the odds of this happening are not rising much. The Intergovernmental Panel on Climate Change (and other agencies) estimate that sea levels are rising a little more than an inch per decade. Their main projections are that sea levels will rise about a foot and a half by 2100. Moreover, if I did own a beach house, I would have many ways to adapt. Most of the beach houses in the resort I often visit are built to withstand floodwaters—elevated, so that the living area is raised one story above the ground. Nordhaus continues the environmentally oriented conservative’s musings: “What do conservative economists think?” Martin Feldstein, Michael Boskin, Greg Mankiw, Kevin Hassett, and Gary Becker, “all favor a carbon tax as the most efficient approach to slowing global warming” (p. 312). Well argued. However, Nordhaus doesn’t give their estimates for how large the tax should be. There’s the rub. Almost every economist I’ve met favors Pigouvian taxes equal to marginal external costs, but accurately measuring external costs is particularly difficult for greenhouse gases. We do not know how technology will develop, so we have a very “murky” (Nordhaus’s word) grasp of marginal external damages in the future.

In projecting the future, we face what I call the Titanic Problem. It’s not that the problem is titanic, it’s that we cannot anticipate how technology will solve our problems far into the future—just like contemporary observers of the fate of the RMS Titanic. In the four decades before the Titanic’s maiden voyage, icebergs sank eight ships in the North Atlantic. So, when the Titanic went down in 1912, killing 1517 passengers and crew, there was reason to fear the continuing menace of icebergs. However, since 1912 there have been only two cases in which deaths have resulted after ships sank due to collisions with icebergs—the last was in 1957. Observers in 1912 couldn’t have known that the invention of the airplane about a decade earlier would set in motion an industry that would make trans-Atlantic passenger liners obsolete. Thinking historically reminds us that the worries of a century ago have very little resemblance to the worries of today—and I suspect that the same will be true a century from now.

The Spirit of Green also grapples with the abject failure of international efforts to stem the rise in greenhouse gas emissions. Nordhaus understands clearly that the root of this failure is that international agreements—such as the Kyoto Protocol and the Paris Accord—have had no teeth. Because of this, individual countries pay high costs when they voluntarily reduce emissions, but reap virtually no benefits from doing so. He advocates an international climate “club”—along the lines of the World Trade Organization–whose members would jointly agree to tax themselves for carbon emissions, while penalizing those who don’t join, especially by taxing imports from them. Unfortunately for this idea, the countries that are most likely to join such a compact—Europe, the United States (under certain leaders), Japan and a handful of others – now generate only about one-third of carbon emissions.

Putting aside these issues, there is much to like in The Spirit of Green. My favorite chapters are “Green National Accounting,” “The Lure of Exo-civilizations,” and “The Green New Deal.” In the first of these, Nordhaus discusses how to adjust GDP calculations to get a truer, greener measure of economic growth. His first step is to subtract off depreciation and look only at the income of residents, shifting the focus to Net National Product (NNP). The great surprise is that when one subsequently adjusts NNP by putting a price tag on carbon dioxide emissions, the adjustment shows slightly higher economic growth from 1973 to 2018 than when ignoring the costs of emissions, despite Nordhaus’s assumption that the social cost of carbon has risen by 2 percent per year. Next, Nordhaus adjusts for changes in subsoil assets (such as oil, natural gas, and copper) and puts a price tag on old-fashioned air pollution. Because we have discovered new subsoil assets as fast as we’ve depleted them and because air pollution levels have declined, Nordhaus concludes that “green” national accounting reveals that the economy has been growing faster than official measures indicate.

The chapter on exo-civilizations points out the immense expenses of living anywhere we don’t naturally live. He estimates that the cost of living in Antarctica (whose formidable weather is far more hospitable than any space colony) is about $200,000 per year. The annual cost of the International Space Station runs nearly $600 million per person. As a bonus, he calculates the national accounts of Biosphere 2—the huge glass-enclosed structure near Tucson, which was isolated from the rest of the world and attempted to test the viability of a closed ecological system. The experiment, which ran in the early 1990s, didn’t go very well. Atmospheric oxygen levels fell to levels that were almost fatal and all pollinators went extinct, for example. Nordhaus calculates that Biosphere 2’s annual net national product per capita was negative $3.4 million (year 2015 dollars). The message I draw is that earth is irreplaceable. We should be very grateful for it and cherish this true gift.

Finally and fittingly, the chapter on the Green New Deal chastises its proponents for advancing policies that “take the maximum steps at whatever the cost” (p. 175, emphasis in the original). While the Green New Deal has made quite a political splash, it has “avoided the inconvenient truth that climate-change policies—particularly those that would meet its goals—would require aggressive price-raising measures” (p. 176.) Nordhaus essentially accuses it of being a bait-and-switch ploy—flying a green banner but mainly focusing on issues of redistribution: The Green New Deal “is primarily about policies to enhance equality and fairness rather than Green policies” (p. 176).