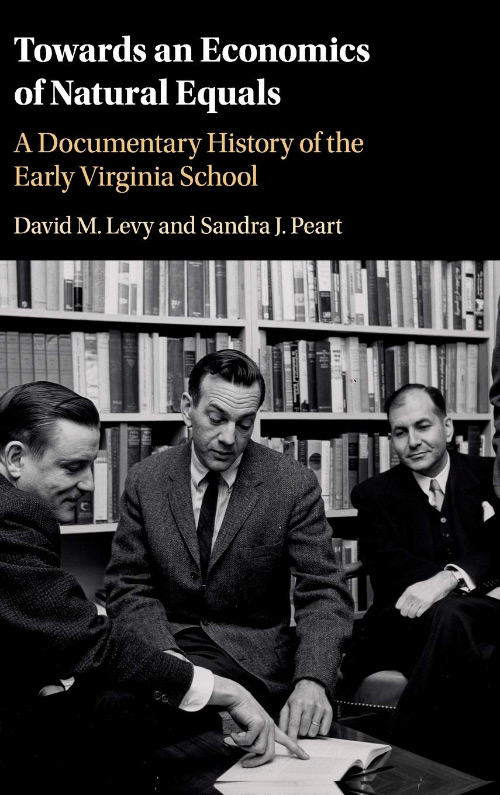 Towards an Economics of Natural Equals
A Documentary History of the Early Virginia School
David M. Levy and Sandra J. Peart
Kindle Hardcover
This book review appeared in the Winter 2021/22 issue of The Independent Review.

Although many books have been written about the ideas of the Virginia School, especially the ideas of James Buchanan, the central figure in the development of the school, one big contribution this book makes is that it contains many previously unpublished documents that show the struggle Buchanan and his colleagues had in trying to establish their school. That struggle was on the two fronts noted in the previous paragraph: the struggle for acceptance of the school’s ideas and the struggle to fund the school’s programs.

The Virginia School’s origins might be traced back to the establishment of the Thomas Jefferson Center for Studies in Political Economy (TJC) at the University of Virginia in 1957, spearheaded by Buchanan and Warren Nutter. The book discusses earlier work of Virginia School scholars—most notably, Buchanan’s earlier work—as well as the influence of “the old Chicago School” and the ideas of Frank Knight. Buchanan is heavily featured in the book, making the ideas of the Virginia School appear to be Buchanan’s and other supporting individuals’ ideas. This conflation seems appropriate because Buchanan’s ideas had the largest impact in shaping the school’s unique identity.

The book looks at the methodological differences between the Virginia School in its early years and mainstream scholars, including Kenneth Arrow and George Stigler, but the difficulties the school faced were often based more on ideological issues. The Virginia School and Buchanan in particular had a strong classical liberal orientation that ran into opposition both from a funding standpoint and from others at the University of Virginia.

A funding proposal by the TJC in 1961 was rejected by the Ford Foundation, and the sense was that it was rejected “in no small measure because of a perceived unity of conservative views at the Center” (p. 49). In 1963, a self-study report done by the University of Virginia found that the TJC had a “particular” and disreputable viewpoint. The book provides detailed documentation of the Ford Foundation grant application and of the discussion that occurred in the aftermath of its rejection.

The book discusses at length funding for Virginia School programs by the H. B. Earhart Foundation as well as later funding contributions from the Koch Foundation. These foundations were associated with free-market and classical liberal ideas, reinforcing the view many had about the school’s ideological orientation. The book considers the relationship between the school and the “antidemocratic right,” with some emphasis on Buchanan and Tullock’s relationships with Murray Rothbard, and concludes that “[e]vidence of a connection between the early Virginia School and the anti-democratic right is rather thin” (p. 232).

The book emphasizes throughout the Virginia School’s classical liberal ideological orientation and notes the negative reactions many had to the school for that reason. At the University of Virginia, “open hostilities [were] directed by the university administration toward the economists of the Virginia School” (p. 244). The administration saw the Economics Department as espousing a “single point of view” and recommended hiring economists at the senior level with a different and modern outlook to dilute the department’s perceived ideological slant.

The book devotes a chapter to work by Buchanan and Nutter advocating tuition grants to parents who wanted to send their children to private schools. This is a minor part of the Virginia School’s work and of the work done by Buchanan and Nutter, but it has recently risen in visibility because of claims that their support for government funding for private schools was intended to prolong segregated education. The book provides ample evidence, however, that their advocacy was based on individualistic grounds and that Buchanan in particular viewed voucher funding as a way to equalize opportunities, not to segregate students.

The book highlights aspects of the Virginia School that challenged the orthodoxy at the time. The school’s individualistic approach to political economy and its challenge to majoritarian democracy, monetary policy, work on the public debt, rent seeking, and the role of economists as advisers are discussed in chapter 5. Readers interested in the development of the Virginia School’s ideas will find insights here, and it is interesting to note that with the major exception of rent seeking, the school’s ideas still remain outside the mainstream. The Virginia School is often associated with public choice, and although there is a connection, most scholarly work in public choice is neoclassical and empirical in nature, and this chapter does a good job of distinguishing some unique Virginia School ideas that differentiate it from public choice.

The book recounts some notable connections between Virginia School economists and others, noting the relationships between Buchanan and Friedrich Hayek, Nutter and Walt Rostow, and Tullock and Karl Popper. It discusses Buchanan’s description of the old Chicago School heavily influenced by Frank Knight and the new Chicago School led by George Stigler and Robert Lucas to emphasize the distinction between the Chicago and Virginia Schools. Buchanan, Nutter, and Tullock received degrees from the University of Chicago, so it is natural to see a relationship between those two schools, making Buchanan’s distinction between the old and new Chicago Schools very relevant to understanding the evolution of Virginia School ideas that began with the old Chicago and departed from the new. Chapter 6 features an eight-page appendix that reproduces Buchanan’s essay contrasting the old and new Chicago Schools.

The subtitle of the book calls it “a documentary history of the early Virginia School,” and its most valuable contribution is that it reproduces many previously unpublished materials to support its recounting of the school’s founding and early development. The book makes it appear as if the establishment of the Virginia School faced one struggle after another, and although there is some truth in that—there will always be resistance to ideas that challenge the status quo—readers should also recognize the remarkable success the Virginia School had and continues to have. Yes, Buchanan and Tullock left both the University of Virginia and Virginia Tech to seek more congenial environments and ended up at George Mason University, but despite some funding struggles, they did attract funding to support their programs, and Buchanan won a Nobel Prize in economics in 1986 for his work. Although the ideas of the Virginia School remain largely outside the mainstream, they are a visible alternative.

The last chapter asks, “Should the Virginia School be restored?” I am surprised that Levy and Peart would ask that question because in my view the Virginia School has never weakened and still has a solid home at George Mason University, even though all of its founders are no longer living. The school’s distinctive ideas remain central to George Mason’s Ph.D. program in economics, and its graduates have been successful in securing academic positions throughout the country. The concepts that Buchanan emphasized throughout his career—individualism, subjectivism, and politics as exchange—remain in that program, differentiating it from other Ph.D. programs.

The Virginia School seems as well established today as it has ever been, and those associated with it are among those who will have an interest in its history. This book is an important addition to that history.