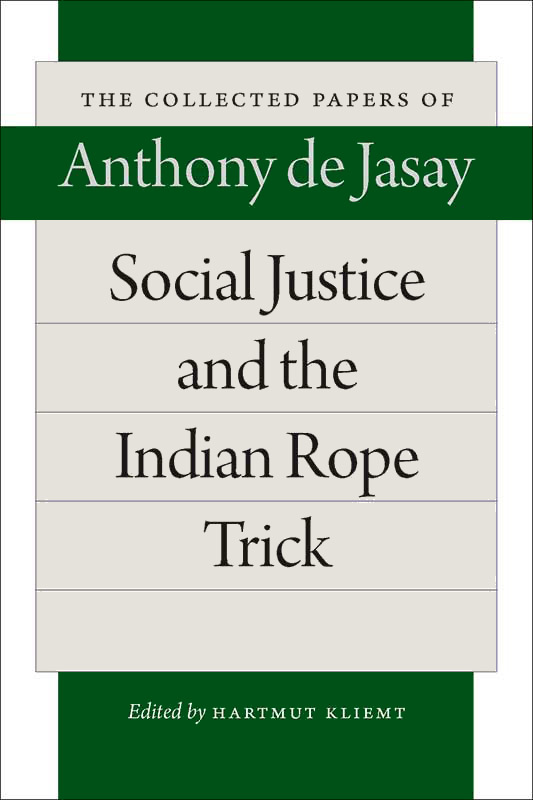 Anthony de Jasay says he is “an independent scholar and philosopher.” He uses words intentionally, so one assumes he endorses the ambiguity. He is independent, first, in the sense that he works for himself. He writes and gives lectures because he is interested in the world, not because he is obliged by contract or university affiliation to deliver “publications.”

But he is also independent in a second, larger sense. He is not entirely on anyone’s side because no one is entirely on his side. He has said that he might be an anarchist, provided he were the first one to be able to define the term anarchist. Given the connotations the word has taken on, he thinks it nearly meaningless as a label, a threat to his independence.

So I won’t pretend to try to classify him or his views except to say that his work—from the sustained arguments in The State (1985) and in Social Contract, Free Ride (1989) to the essays in the recent twin edited volumes Political Philosophy, Clearly (2010) and Political Economy, Concisely (2010) (all published by Liberty Fund)—provides insights and challenges that scholars of all perspectives should take seriously.

Jasay’s most recent work takes something of a new direction. In The State, he argued that the very notion of a contract enforcer hired because contracts are unenforceable is illogical. Contractarians ignore the fact that the “state,” once created, will have interests of its own and that paramount among these interests is survival. In the case of the state, Jasay argues that survival means growth. We cannot rely on a state to enforce or even honor contracts when its purpose for existing is to protect itself first.

In Social Contract, Free Ride, Jasay took a more consequentialist turn. The argument many people use to justify the state is that—absent state enforcement—people will free-ride, taking benefits but shirking when it comes time to pay the costs. So the state is created to solve “commons” problems. Jasay argues that such a system cannot possibly work because the biggest commons of all is the state’s budget. Each of us can take benefits unrelated to the amount of taxes we pay or in fact anyone else pays. Thus, citizens themselves have an irresistible incentive to parasitize the body politic. Far from curing the free-rider problem, creation of a state budget makes free riding worse—far worse, in fact. The “social contract” creates for the first time a career opportunity for full-time free riding in the form of rent-seeking opportunities and raids on the enormous public purse.

That background is important because in Indian Rope Trick Jasay takes on a new topic: social justice. In particular, he questions the equating of inequity and inequality. I was reminded of John Stuart Mill’s famous distinction between production and—“the things once there”—distribution.

The laws and conditions of the Production of wealth partake of the character of physical truths. There is nothing optional or arbitrary in them. Whatever mankind produce, must be produced in the modes, and under the conditions, imposed by the constitution of external things, and by the inherent properties of their own bodily and mental structure. Whether they like it or not, their productions will be limited by the amount of their previous accumulation, and, that being given, it will be proportional to their energy, their skill, the perfection of their machinery, and their judicious use of the advantages of combined labour. . . .

It is not so with the Distribution of wealth. That is a matter of human institution solely. The things once there, mankind, individually or collectively, can do with them as they like. They can place them at the disposal of whomsoever they please, and on whatever terms. . . . Even what a person has produced by his individual toil, unaided by any one, he cannot keep, unless by the permission of society. (Principles of Political Economy with Some of Their Applications to Social Philosophy, book II, chapter 1 [1848; Indianapolis, Ind.: Liberty Fund, 1990])

To paraphrase, production is scientific and the province of economists. But distribution is ethical and the province of philosophers and devotees of social justice. In fairness to Mill, whose actual views were much more nuanced, we should call this the “standard narrative.” Jasay rejects the standard narrative in detail for two major sets of reasons.

First, competitive market systems are just in the sense that they treat likes similarly and unlikes differently, precisely in proportion to their morally relevant differences. It is the essential nature of market function that inputs are paid the value of their marginal products. Each input will be able to negotiate in a competitive setting to obtain its increment to physical output, multiplied by the price that output commands in the downstream market. This process cannot be stopped or even manipulated in a pure market setting, and the value of marginal product shares is the essence of justice: each input gets the share of the pie that it creates. Some contracts may vary slightly above or below this amount because of costly information and stickiness in price adjustments, but these variations will be short-lived, unless of course the distortions that result from state-imposed regulations prevent price adjustment. Because the economy is dynamic, it makes little sense to use static conceptions of equilibrium. But market processes, in Jasay’s view, always at least tend toward justice because prices move in the direction of value-of-marginal-product shares.

Second, and more fundamentally, market systems must inherently result from inequality and cause inequality in the distribution of talent and wealth. Markets come about because we—like Adam Smith’s philosopher and street porter—are unequal in the first place, either in potential or in actual accomplishment. Exchange and the benefits of production result from differences, from heterogeneity in ability, effort, location, and circumstance. Knowledge is dispersed across many different people, and some people are better able to take advantage of the opportunities for trading and creating wealth.

But labor is not the only productive resource in a market system. Initial inequalities that result from heterogeneous human capital are quickly multiplied because of the implied differences in capital accumulation. In years, not generations, differences that were originally potential are now visible and real and—in many people’s view— unconscionably large. (I should note that Jasay does not by any means deny the importance of pure luck in explaining ex post differences in wealth distribution. But his point is that even deterministic forces would be sufficient to create the differences that many social theorists find to be unacceptable.)

Second, as Jasay sees it (pp. 16–17, 43–49), the cake is not baked first and then independently bargained over to determine who gets how big a slice of this cake that was baked for no reason. Production and distribution are almost never two distinct phases of a market process. In a market for inputs, the width of the slices get determined by their marginal contribution to the cake, and the size of the cake itself is determined by how much society values it. These negotiations take place regarding a cake that is about to be baked but does not yet exist. Each input always gets an “equal” share, but in terms of Aristotelean equality, which requires that differences are inherited in the shares according to the differences in the value produced.

Jasay summarizes the argument this way, punning on his view of cake as “just deserts”: “[In a market setting] output is distributed while it is produced. Wage earners get some of it as wages in exchange for the effort; owners of capital get some of it as interest and rent in exchange for past saving. Entrepreneurs get the residual as profit in exchange organization and risk bearing. By the time the cake is ‘baked,’ it is also sliced and those who played a part in baking it have all got their slices. No distributive decision is missing, left over for ‘society’ to take” (p. 43).

These facts about distribution in a market economy are easily argued and accessible intellectually to most people. But then there is a mystery to be explained: given the powerful claims that equality is almost never equitable, why are egalitarian tendencies so central to political debate and social discourse? Jasay lists three conjectures about reasons why this might be so: simple envy, dissembling, and a genetic predisposition. Of course, envy is a venal sin, and dissembling—arguing for “equality” and “justice” out of self-interest—is just rhetorical sophistry. Jasay admits that the genetic disposition is possible, but he questions whether it is actually adaptive in modern social contexts. Primitive humans also presumably acted on impulses that led to rape and murder, but we are not tempted to elevate these impulses to the status of social virtues. Something more must be going on.

The argument Jasay gives to explain the “something” more is contained in the title of his new book. On ethical or moral grounds, there is simply no obvious relation between inequality and inequity. Yet, for the reasons outlined earlier, many people wish to “restore” an equality that never existed and to conduct a “revolution” in which equality is finally imposed as a means of restoring justice. They somehow need to make the argument for equality stand on its own.

The “Indian rope trick” is the clichéd magic trick performed by the Indian fakir. Holding an apparently standard rope, he tosses the limp coil into the air, where it straightens magically so that the fakir can climb it. The rope is transformed from something that one can use to tie a heavy weight to something else that will by itself support someone being lifted up.

The problem, according to Jasay, is that the rope cannot actually do this without fakir fakery. The rope must be attached to something else so it can fly. In the case of equality, the rope is attached to social justice, which is actually an unrelated concept. As a consequence, there is no way to elevate equality without just clumsily tying a big, confusing knot. So the “Indian rope trick” is the elevation of equality to the putative central goal of political action by tying it to social justice.

Jasay provides many insights, chuckles, and disturbing connections in these essays, and I can’t do justice to the book in this review. But I can summarize a few of the more pithy observations:

I found Indian Rope Trick to be a delight. Anthony de Jasay has combined a serious philosophical discussion with a transparently persuasive framework for explaining some of the most significant problems that societies face. As is often the case with great writing, I found myself nodding at insights that apparently I had always believed but never clearly recognized until Jasay spelled them out. Once complicated matters are explained by a master theoretician such as Jasay, they turn out to have been obvious after all.