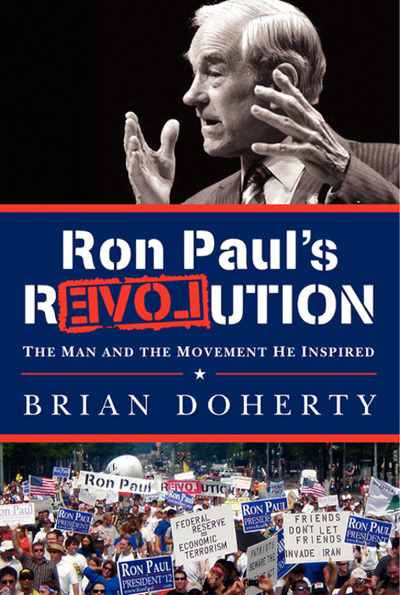 Ron Paul’s rEVOLution
The Man and the Movement He Inspired
By Brian Doherty
Kindle Hardcover
This book review appeared in the Spring 2013 issue of The Independent Review.

Only five years have passed since Ron Paul began to put together his 2008 presidential run, but in that short time the American political landscape has been altered in a way that few imagined. Paul is likely the first libertarian pundit or politician in generations to attain household-name status, and he is almost certainly the only one in that time to actually claim the title libertarian. But this septuagenarian member of Congress who reminds many people of their grandfathers has managed to gain a nationwide stage for his libertarian ideas while injecting gravitas into political positions that were once considered to be the fringe of the fringe.

Just five years ago, the idea of ending—or even substantially limiting—the Federal Reserve System’s powers was not even up for debate, and the ideas of ending the drug wars and the regular wars as well were reserved, or so we were told, for a few guys in a phone booth somewhere. Since then, the national media and the national political establishment have been forced to grapple with these libertarian ideas that they have been ignoring with impunity for decades. Paul can claim millions of followers of varying degrees of enthusiasm, and he has become one of the most recognized national political figures in the United States today.

How did Ron Paul go from obscure congressman to leader of a national libertarian movement? Brian Doherty, in his new book Ron Paul’s rEVOLution: The Man and the Movement He Inspired, strives to answer this question. In the process, he gives us one of the first contributions to the documented history of the Ron Paul movement, its members, and the ideas behind it.

Doherty begins by attempting to place the Ron Paul movement within the taxonomy of American political movements, drawing primarily on the Jacksonians and, more unexpectedly, on William Jennings Bryan’s movement as well.

The Jacksonians offer an obvious connection, of course, in their opposition to central banking, but a connection in tone also exists. Paul’s movement, with its antielitist and populist tone and its opposition to centralized government, can clearly be grouped with the Jacksonian movement on a variety of issues. As Doherty points out, Paul himself in the 1982 book The Case for Gold (reprint, N.p.: Important Books, 2012) claims the Jacksonians as intellectual forerunners.

Less clear is the connection to William Jennings Bryan, although Doherty makes a fairly compelling case, noting that “[t]he two politicians’ character, style, populist appeal, and most specifically their anti-imperialism mark them as kin.” In addition, Bryan shaped national politics without ever being elected president. Paul will undoubtedly be able to make the same claim.

If Paul is now the leader of a populist, decentralist, and anti-imperialist movement with its roots well established in American history, how did he attain this position? As Doherty observes repeatedly through interviews with members of the Ron Paul movement, Paul’s consistency over decades on so many issues attracts many of his followers. This consistency extends not only to Ron Paul’s time as a national candidate, but also back at least as far as his first years in the House of Representatives during the 1970s.

Doherty provides some nice details about Paul’s early political career, showing that the basic outline of his political thinking were already in place. In contrast to what normally happens to people who are elected to Congress, Paul’s stubborn opposition to supporting measures he considered unconstitutional and contrary to human freedom became more radical over time, not less. By the time he brought his first stint in Congress to an end, he had already set the overall framework for his political career. It would prove to be one in which he was a libertarian activist first and an elected official second. By the late 1980s, when he left the Republican Party and became explicitly a libertarian activist, he had already made it clear that if being in Congress served his goals as an activist, he would seek election. The image Doherty paints is of a man who truly has very little interest in being a politician beyond the assistance it can provide him in spreading libertarian ideas.

Following his exit from the Republican Party, Paul moved to the Libertarian Party and the presidential race of 1988. Doherty documents how Paul came into the race thinking that his political experience and nationwide fund-raising base would pave the way to the Libertarian Party nomination. In fact, however, he met considerable resistance from many of the party activists, who had doubts about Paul not only because of his past as a Republican, but also because of his general lifestyle. His conservative personal views, religion, and lack of aversion to right-wing populists have been points of contention between libertarian factions ever since.

Building on research for his earlier history of libertarianism, Radicals for Liberty, Doherty in this volume provides additional details about how libertarian ultraactivist and Ron Paul supporter Murray Rothbard had predicted a rift between Paul’s supporters and others: “Rothbard feared that the mass of actual Libertarian Party members—he condemned them as ‘luftmenchen’ people of the air, nonbourgeois drifters and hippies who turned off most Americans—were [sic] likely to have problems with the staid Dr. Paul. Rothbard was right.” These anti-Paul factions’ opposition then materialized in the form of American Indian Movement activist Russell Means, who contested Paul for the nomination. Paul would eventually win, but an enduring divide had been opened. Much of this rift eventually would prove to be of limited consequence as Paul’s base of support expanded well beyond the old-movement libertarians, but even as late as 2011 he continued to meet with reservations from some within the movement.

Ron Paul’s son Rand, who is far more conventionally conservative in his outlook than his father, ironically seemed to have won more acceptance by some libertarians. Referring specifically to the Cato Institute’s continued reservations about Ron Paul even as it sought out Rand Paul, Doherty confesses: “Frankly, Rand’s better success with the normal Republican/cosmopolitan libertarian audience confuses me. . . . [L]ibertarian groups such as the Cato Institute seem to adore him unreservedly, without the hedging that always surrounds Ron Paul.”

The Rand phenomenon itself illustrates the overall power of the Ron Paul movement in that it has produced copycats—some of them named “Paul” and some not. However, the fact that a conservative such as Rand receives greater acceptance from the libertarians at the Cato Institute than his father does signals that old conflicts still matter in some corners of the movement. Although Ron Paul’s more radical foreign policy is undoubtedly a factor, some of the divide may reflect the old division between the straitlaced bourgeois libertarians and their more bohemian counterparts.

By considering such episodes, Doherty provides interesting insights into debates and controversies that have shaped ongoing internecine conflicts, although the people Ron Paul has brought into the movement in recent years may find the endurance of the old opposition to Paul to be rather surprising, if not trivial. Today’s Ron Paul movement is not confined to the world of movement libertarians, which is a major reason for its significance. Doherty devotes the second half of his book to an examination of the Ron Paul movement since 2008. This part rests largely on fieldwork and on interviews of Ron Paul activists and fans, with Doherty delving into the world of modern Ron Paul supporters and seeking to understand their motivations.

Through the first half of the book, we come to understand Paul’s history and his movement’s intellectual and historical foundations, but as we delve into the second half, we are likely to come to the conclusions that the movement extends far beyond Ron Paul himself and that Paul may actually have limited control over the movement he is credited with founding—a situation that likely suits Paul fine. Through Doherty’s work, we get to know the many and varied people who are driving the movement. From Internet entrepreneurs to suburban moms to nomads who travel the country volunteering for Ron Paul, the movement, Doherty shows, is not only varied, but also large. As Doherty traveled through the early primary states in 2008 and 2012, he indeed was surprised by how broad Paul’s support is among so many Americans. Some of them, he found, were brought into the movement by Paul’s debate performances, and many were brought in through Paul’s legions of dedicated activists, who have used everything from expertly produced Web videos to money bombs to home-made roadside signs.

The heart of the Ron Paul movement may be not Ron Paul himself, but the grassroots activists who have propelled the movement into the national spotlight. Doherty also shows that since 2008, these grassroots activists have become more sophisticated, professional, and effective, though no less radical in many cases. The grassroots dedication has transformed Paul’s campaigns into a national, well-funded movement, and its effect in introducing so many young Americans to the world of libertarian ideas will have effects that are not yet obvious.

Ron Paul’s rEVOLution is at times somewhat laborious to read, if only because it seeks to provide a great deal of detail about a political movement still in the making. It also contains much information that will interest only the most devout movement libertarian. Nevertheless, many of these details will no doubt prove valuable as material for future writers who seek to understand this movement and its repercussions. As of this writing, the 2012 presidential race is still not complete, so Doherty’s book cannot give us even a summary of the whole story. The effects of political upwellings such as the Ron Paul movement tend to unfold over decades, however, so Doherty has given us a helpful first installment of a history that remains to be written and rewritten.