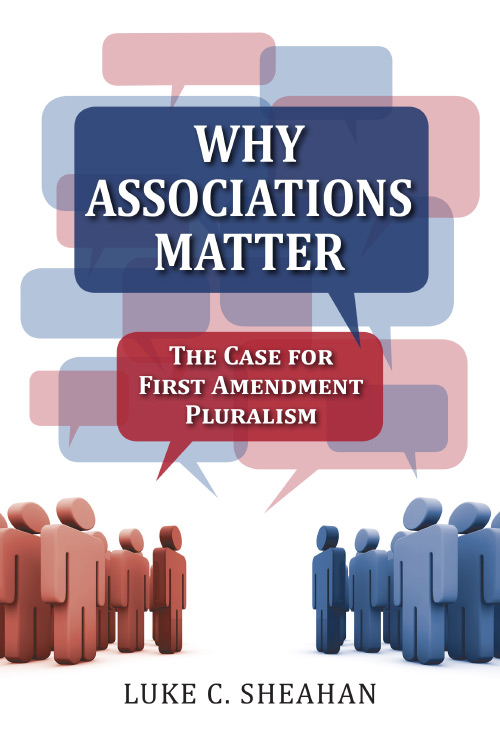 Why Associations Matter
The Case for First Amendment Pluralism
Luke C. Sheahan
Kindle Hardcover
This book review is a web exclusive for the Fall 2020 issue of The Independent Review.

According to the first amendment of the U.S. constitution, there are five categories of human activity that “Congress shall make no law respecting....” Perhaps you can name them; most people can’t. Speech, press, and religion (exercise and establishment) are the “big three.” The other two, association and petition for redress of grievances, are more like answers to trivia questions than real freedoms.

But it doesn’t have to be that way, and as Luke Sheahan shows in this terrific book, it shouldn’t be that way. Associations matter, and the freedom to associate is fundamental to the American conception of democracy. I should say a little more about that, because there are many (including my Duke history colleague, Nancy McLean) for whom this distinction is slippery. Consider two versions of protections for individual political freedoms: the French “Declaration of the Rights of Man” and the U.S. “Bill of Rights.”

The French version, written in August 1789, has these “protections” (emphasis added):

3. The source of all sovereignty resides essentially in the nation; no group, no individual may exercise authority not emanating expressly therefrom....

10. No one is to be disquieted because of his opinions, even religious, provided their manifestation does not disturb the public order established by law.

11. Free communication of ideas and opinions is one of the most precious of the rights of man. Consequently every citizen may speak, write, and print freely subject to responsibility for the abuse of such liberty in the cases determined by law.

The French conception of democracy is clearly organic, with sovereignty vested in the nation and the people ruled by the general will. It is impossible for the law to be tyrannical or oppressive; in fact, as Rousseau put it:

When in the popular assembly a law is proposed, what the people is asked is not exactly whether it approves or rejects the proposal, but whether it is in conformity with the general will, which is their will....

When therefore the opinion that is contrary to my own prevails, this proves neither more nor less than that I was mistaken, and that what I thought to be the general will was not so. If my particular opinion had carried the day I should have achieved the opposite of what was my will; and it is in that case that I should not have been free.

So all freedom requires is that the state ensures that the people are not interfered with as they carry out the orders of the general will. You can have your own opinions, and you can speak and write about those opinions, unless those views are illegal, and then you can’t. But that’s okay, because it’s for your own good: if your view had been allowed, it actually would have been the opposite of your true view, and your “freedom” to speak or write falsehoods would mean “in that case you should not have been free.”

The U.S. version was written in final form in September 1789, less than a month later. It appears that the Americans were not aware of the French effort, though both groups of writers knew many of the same classic works and shared many concerns. First, consider the Preamble to the Constitution, which has a completely different basis for sovereignty: individuals, not the nation, are the first movers. “We the people of the United States ... do ordain and establish this Constitution for the United States.” The nation does not establish the sovereignty of the people; the people delegate sovereignty to the nation.

And then here is the First Amendment:

1. Congress shall make no law respecting an establishment of religion, or prohibiting the free exercise thereof; or abridging the freedom of speech, or of the press; or the right of the people peaceably to assemble, and to petition the government for a redress of grievances.

With that introduction, it’s easy to see why, in the U.S. system, “associations matter,” as Sheahan suggests in his book’s title. Sheahan is a political science PhD from American University, but much of his experience with First Amendment litigation and disputes comes from his four years as director of campus networks for the Foundation for Individual Rights in Education (FIRE). It is the nature of defending the freedom of association on modern college campuses that many of the controversies stem from attempts by the left to deny a forum, or meeting space, for conservative groups, but there is nothing inherently conservative about Sheahan’s argument. When my home state of North Carolina passed the heinous “Speaker Ban Law” in 1963, the rights of association being trampled were the then-marginalized leftists and civil rights groups trying to participate in the intellectual life of universities.

Sheahan’s analysis rests on the plausible—at least for those us who don’t know the history of Supreme Court jurisprudence—claim that the five listed freedoms should all have more or less equal status. That is, the right to freedom of speech is protected (“no law ...”) and so is the right to assemble in groups. Groups are a different thing from speech, and each is protected from meddling. But Sheahan notes that examining the history of litigation and court decisions reveals this is very much not the case. His argument is that there is a “First Amendment Dichotomy,” where the state is one thing, and individuals are another thing, and there are limits on what the state can regulate when it comes to actions by individuals. But groups, or associations (we usually call the right peaceably to assemble the “freedom of association”), fit awkwardly in this dichotomy. Over time, in fact, associations have been largely relegated to the periphery, except as a forum in which individual rights to speak or have religious services are acted out.

Think, for example, how many times you have heard the Citizens United (2010) decision criticized as claiming that corporations can participate in politics because “money is speech.” Corporations aren’t people, this argument goes, and so Citizens United was wrongly decided.

The only way you could make that claim is if you have never read the decision. The phrase “money is speech” never appears, is implied, and in fact has nothing to do with the case. The reason Justice Anthony Kennedy found for the plaintiffs was that associations have rights, as associations. This is not a free speech right; it is a right of association, full stop, no qualification, no instrumental justification required. Citizens have the right to speak; they also have the separate and coequal right to assemble. The form of the assembly they choose can be a political party, to be sure. But it can also be a nonprofit group, or a corporation.

Sheahan’s solution to the “First Amendment Dichotomy” of individuals and the state as the only relevant actors is what he calls “First Amendment Pluralism.” The nice thing about this approach is that it makes a judo move, co-opting the “man is a political animal” notion of many democracy activists and vesting groups and associations as the forum in which politics happens. The justification for freedom of assembly is that the social aspect of politics is fundamental; Sheahan uses a particular conception of this social nature of democracy, based on sociologist Robert Nisbet’s theory of the “laissez faire of groups.” But this notion of associations as important entities, deserving of protections in their own right, can be found in sources ranging from Aristotle to Tocqueville.

The book is literate, and wide-ranging. Sheahan makes a particular claim, but he admits qualifications and alternatives. The history he gives of court decisions was one I had thought I knew, but he reveals facts and interpretations of which I was unaware. The book succeeds on both fronts where it works to make progress: First, I was persuaded that the problem Sheahan identifies is correct. There is a mistaken (and in fact undefended) dichotomy that uses a Procrustean exclusion of associations to misrepresent the meaning of the First Amendment. Second, the solution that Sheahan proposes, based on Nisbet’s social/sociological conception of groups as important actors in their own right, brings back much of the original meaning. It will be unsettling to go through the adjustment process Sheahan proposes, but he’s quite right that we have to try.