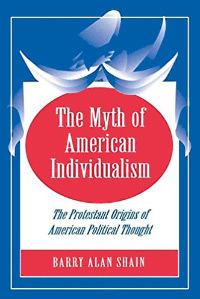 The Myth of American Individualism
Barry Alan Shain
Kindle Hardcover Paperback
This book review appeared in the Summer 1997 issue of The Independent Review.

Celebration of the nation’s bicentennial touched off a lively reappraisal of the American founding era. From the events leading to the declaration of American independence in 1776 to the arguments over the adoption of the U.S. Constitution in 1787–88, each step in the state-building process was carefully investigated. Yet, despite a remarkable outpouring of research and three decades of debate, no agreement emerged regarding the founders’ “original intent.” Some progress was recorded. After the published reports of Bailyn, Pocock, and Wood, few historians could cling to the old Marxist claim that material interests and class rivalry alone had determined the historical course. But although most historians acknowledged the power of ideas and ideologies to shape the course of human events, it was still unclear exactly whose ideas and which ideology most completely captured the imagination of early America.

Wood and Pocock, in particular, raised a strong challenge to the standard account that for so long had accorded John Locke’s ideas a position of preeminence in the period. Evidence of a very different ideological outlook, a “classical republican” tradition that could be traced to Aristotle and ancient Rome, appeared everywhere in the public prints of the age. Lockean liberalism extolled an ethic of private acquisitiveness, politically protected the natural and inviolate right of property, and allowed wide inequalities in the distribution of wealth, whereas the republican tradition upheld the good of the res publica, demanded public participation—even patriotic sacrifice—on its behalf, and tirelessly warned of the baleful effects of economic inequality. Seen from this latter perspective, the individualist proclivity invariably divided republics into insidious factions and so paved the way for political competition, corruption, and dissolution. The founders’ republicanism, in short, bore witness to the communal spirit of ’76. American patriots fought hard to preserve the public liberty of thirteen self-governing corporate bodies, not the private liberty of so many self-centered citizens.

Before long, however, this challenging revisionist viewpoint itself came under critical scrutiny. The embarrassing problem was that historians who emphasized the Lockean or liberal and those who stressed the civic or republican roots of American democracy could both point to compelling documentary evidence in support of their competing claims. The perplexing reality is that throughout the founding era, liberal commitments and republican concerns continually blended, very often within a few brief pages or paragraphs of the same pamphlet, sermon, or revolutionary proclamation. Thus, Jefferson’s Declaration, which so ably exposed the imperial threats to colonial self-rule, also affirmed the self-evidence of Lockean natural rights. Hence, no consensus was ever reached over whether the liberal or the republican was the more influential discourse or how the simultaneous appearance of both political idioms could be logically reconciled.

While the keepers of the liberal faith and the purveyors of republican revision both viewed the founding in a secular light (as either looking forward to a progressive and capitalist future or backward to an ancient and pagan past), other scholars were busy exposing the vital role religion played in the period. Bonomi, Fliegelman, Goen, Greven, Gaustad, and others appropriately placed a deep Protestant faith high on the altar of eighteenth-century American life, where it had historically stood. What, then, was the significance of a Godly worship for the social life and political thought of the times? And what problems might the playing of this religious card pose for the Lockean liberal and civic republican readings of the American founding era?

In The Myth of American Individualism, Barry Alan Shain has furnished some provocative answers. Reviewing a vast and impressive literature, Shain simultaneously debunks both the Lockean liberal and civic republican theses. With the revisionists, Shain bears witness to the communal character of the founding era. In contrast to the civic view, however, he finds that Americans willfully gave themselves not to a spirited public life, but to the spirit of the Lord that dwelled within the breast of each believer. The republican tradition “insisted that full human development was only achievable through direct political participation.” But Protestant America “did not understand political life as having intrinsic worth or as defining the sole path toward full human development.” As “a largely Christian and over-whelmingly rural people, Americans...understood politics as instrumental in the service of higher religious and other publicly defined goals.” Their conception of liberty (which Shain denotes “English political liberty”) “emphasized the instrumental rather than the intrinsic value of political life.” This emphasis bespeaks their abiding confidence in the Protestant path of human development marked out by “faith,” “allegiance to family,” “dependence on God’s love and his freely given grace,” and most important, “brotherly [or] communal oversight” (pp. 272, 275–76). This last feature signified a commitment to “an intrusive form of politics,” one that left little room for individual autonomy and self-assertion—hence the “myth” of American individualism. In 1776, Americans rallied not against intrusive political power per se, but merely against the unwelcome imposition of far-off state, continental, and imperial legal mandates. At home, Americans actively upheld “the ethical intrusiveness of communal life.” Humankind is fitted for society, and it is fit that society guide and direct every member along his or her God-given path. Early American society could thus be characterized as “coercively communalistic,” “majoritarian,” even “totalitarian.” Individuals might pull up stakes and depart to foreign parts, but “what they could not choose was self-defined, individualistic freedom” (p. 59).

Up to a point, Shain’s account is clear, coherent, and compelling. A good measure of plausibility must attend a theory that recovers and integrates relevant religious commitments into the broader social and political context of the age. Nonetheless, substantial problems undercut the book’s usefulness. Methodologically, there is a persistent dropping of context, a failure to consider the full body of available evidence. This results in a sizable number of substantive flaws. Thus, in a book exceeding 300 pages, Shain fails to furnish any clear examples of American communalism at work. Missing are any telltale signs of the totalitarian intrusiveness he ascribes to those “Christian utopian, closed corporate communities” (p. 64). In fact, he devotes considerable effort to explaining precisely why America “initially failed to develop in a recognizably authoritarian way” (p. 110). He points to common-law traditions, more tolerant policies imposed by larger, governing political units, the absence of coercive (police) mechanisms, and the need to keep skilled hands from leaving town. Moreover, Shain entirely fails to confront the many scholars who have attested to the steadily expanding individualism of the age (e.g., Appleby, Bonomi, Fliegelman, Green, Hamowy, Kramnick, Pangle, Wood). He cites all these sources in his extensive bibliography and makes passing references to many of them in his text, but makes no effort to refute or reconcile their competing claims. There is also a selective reading of the primary sources. Shain takes the testimony of those who duly condemn those human impulses he identifies as selfish and individualistic. Yet he often overlooks the clear support for individualist constructs (e.g., religious toleration and an inviolate right to the just fruits of honest industry) expressed early on by these same authorities (James Wilson, John and Samuel Adams, Jefferson, Jonathan Mayhew, Abraham Williams, William Livingston, and Benjamin Rush, to name but a few).

In the end, we are left with much the same puzzle that resulted from the republican revisionists’ amassed research. How are the individualistic and seemingly communalistic strains of early American life and thought to be reconciled? Part of the answer lies in a time-frame analysis. As Wood controversially projected an “end of classical politics” thesis, so Shain sees the end of Protestant politics in an emergent individualism, by the 1780s. But this individualism was manifested throughout the founding era. More fundamentally, then, one must gain a clearer understanding of the conception of “individualism” Shain finds “mythic” and absent in the Revolutionary period. It is a peculiarly modern conception, one that “awards an elevated standing to the express wishes and arbitrary or even irrational needs of the individual” (p. 117). This individualism “is founded on a mixture of secular faith in human goodness and irremediable epistemic uncertainty concerning the particular ends humans are to pursue” (p. 128). Perhaps we should scratch human goodness, for the individual Shain is looking for more resembles Hobbes’s atavistic atom than the social being who finds ample space in the social theories of Locke or Jefferson. This individualism also reflects a modern liberal neutrality that can offer no necessary final ends for human conduct—one that, if it did, would defeat the principle of pluralism and pave the way to an authoritarian and therefore illiberal politics.

None of this obtains in the early American context, where an overwhelming concern for the public good and the laws of nature and of nature’s God spelled out a specific moral course individuals were obliged to pursue. By freedom, then, Americans “did not mean negative liberty from authority so much as...positive liberty toward the goals of a dedicated Christian life.... The Revolutionary generation would have found the contemporary understanding of individual freedom to be a form not of liberty, but of license” (pp. 119–20). Shain here invokes much of the testimony the republican revisionists incorporated in repudiating the liberal or Lockean reading of the period. He and they thus rely on Americans’ invocation of “the public good” and the incessant warnings raised against human selfishness. Over and over, Shain points to his patriots’ tireless denunciations of the untrammeled pursuit of self-interest and the riotous sinfulness of the “self” itself. As one typical American put it, here was “really the root of all the vices in the world,” because “a selfish person will promote his own private interest at the expence of the public” (Jacob Green, vice-president of Princeton University, quoted on p. 101). Early America demanded that “the passions of the self must be constrained within a social framework and that little freedom was needed beyond that required in the service of familial, societal, divine, or rational ends” (p. 103). These pious voices expressed a steady “hostility to self-centered activity [and] maintained a particular aversion to a driven pursuit of wealth.” As Shain urges, “This was not yet a world, then, of individualism or of glorification of the autonomous individual. Rather, it was one in which most available theories of the good continued to teach self-overcoming, public shaping of the individual, and sacrifice for the public good” (p. 109).

All this is true. And yet it constitutes no reason to disavow Americans’ simultaneous commitment to individualism, properly understood. Early American individualism was not modern in the (antiperfectionist) sense of being detached from any deeper philosophical outlook. It was a perfectionist formulation built on a clearly defined moral and metaphysical foundation. It did place strict bounds on individuals’ conduct. But moral Americans hoped their countrymen would overcome only the rapacious and immoderate passions. Legitimate self-interest was not anything any self-serving John, Jane, or George might take an interest in, be it another man’s property, another woman’s husband, or an unbounded measure of power. It did not signify the factious freedom to corrupt public office for private profit or apathetically evade one’s civic duty, thus endangering the welfare of all. Contradictions with respect to the treatment of African slaves and Native Americans aside, no individual was free to violate the freedom of others or the public good (“the good of all collected,” as Paine explained). But in a land of unbounded opportunity, individuals were free to live where and worship as they wished, to pursue their chosen callings and enjoy the just fruits of their honest exertions, and to seek their happiness in peace and safety. In these many respects, all blemishes on the historical record aside, American individualism was anything but a myth.