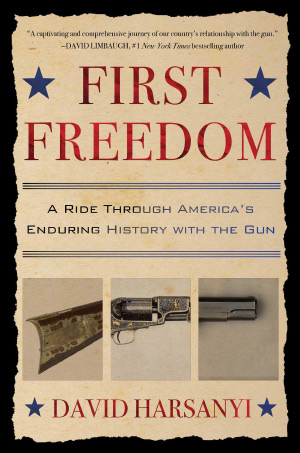 First Freedom
A Ride through America’s Enduring History with the Gun
By David Harsanyi
Kindle Hardcover Paperback Audiobook Audio CD
This book review is a web exclusive for the Spring 2019 issue of The Independent Review.

If I am ever arrested and my house searched, it is likely that the newspaper account will contain some sentence like, “The police found an arsenal in Munger’s house.” I’m one of those people who like guns, the beautiful, intricate, practical functionality of guns. Though I have a variety of types and calibers in my safe, my favorite guns are my Mauser K-98 and my Mosin-Nagant. They are, for all practical purposes, the same gun, both bolt-action guns designed for infantry warfare in the 1890s, both firing rounds similar to what Americans call a 30.06.

But the differences between them reveal cultural and organizational artifacts. The Mosin-Nagant has a straight bolt that seems to the be size of your thumb. I’m pretty sure you could use the stock to drive nails without damaging it in any way. The K-98, with its curved bolt, looks more elegant, though it weighs about the same (at nine pounds or so, these are not light rifles). The traditional (and controversial, I admit) assessment is that, in the late nineteenth century, “the Germans built the best guns and the Russians built the toughest guns.”

If you are still reading, and certainly if you have already left to go write a letter to the editor to correct some mistake I’ve made in describing these guns, you are the sort of person who will find First Freedom a delight. It is not a legalistic argument about the importance of the Second Amendment, but rather a description of the place of guns in American history and culture.

The book begins with an account of a fight between a Huron-Algonquian force and Iroquois attackers, in July 1609. This may or not have actually been the first use of a firearm in a pitched battle (it probably wasn’t, in fact), but the story illustrates the fundamental difference portable, accurate, functional guns make in a battle. The French adventurer Samuel de Champlain, as well as two companions, aimed and fired their arquebuses; two of the Iroquois chiefs lay dead and one was critically wounded, at a range of nearly one hundred yards.

That may not seem like a big deal. I’m not much of a marksman, but I could (probably) hit a stationary man standing three hundred yards away with either of my own 125-year-old museum pieces, using iron sights. But if you had never seen a gun before, and were used to tactics that relied on clubs, small blades, and massed archers who fired more or less without aiming, at least in pitched battles, this tactic seemed astonishing. The Iroquois immediately ran away, and warfare changed.

Harsanyi tells the story of the gun, and the U.S., with zest and energy. It’s entertaining and informative, and goes well beyond just a focus on the “embattled farmers” who stood and fired the shot heard round the world. It is interesting to consider the parallels between the fifteenth century British victory, depending on the skills of the yeoman bowman using the Welsh longbow and the eighteenth century British defeat, depending on the skills of yeoman farmers of the colonies, using the long musket. In both cases, the weapon required considerable strength and practice to master, and in both cases the weapon wielded by experienced hands made previous tactics obsolete in short order.

There are quite a few homespun bits of wisdom here: Daniel Boone apparently said that the necessities for a frontiersman were “A good gun, a good horse, and a good wife,” with the list clearly being lexically ordered. Harsanyi also integrates stories of technical advances and innovations with uses of the innovations in conflict or in self-defense. I really enjoyed the book, and learned more from it than I expected. It’s not easy to create a work that is equally at home for reading on an airplane or studying for historical sources, but Harsanyi seems to have turned the trick.