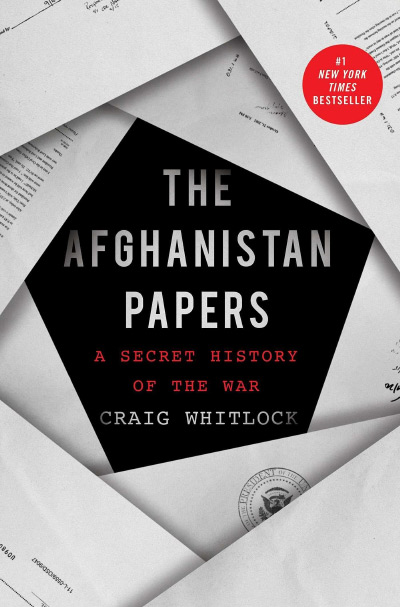 The Afghanistan Papers
A Secret History of the War
By Craig Whitlock
Kindle Hardcover Audiobook Audio CD
This book review is a web exclusive for the Winter 2021/22 issue of The Independent Review.

The scenes coming out of Kabul in mid-August 2021 were astonishing to those old enough to remember the 9/11 attacks and the subsequent rapid defeat of the Taliban and the expulsion of Al Qaeda from Afghanistan in the fall of 2001. The chaotic attempts at rapid evacuation were reminiscent of scenes from Saigon in 1975. The embarrassment of abandoning local allies and American citizens made the bungled fiasco of the U.S. military and diplomatic withdrawal from the country surreal, sobering and humbling. How did a campaign that in the beginning even Barack Obama hailed as “the good war” go so bad? Is Afghanistan really “the graveyard of empires” after all, grinding down and spitting out great armies from Alexander the Great in 300 BC to Britain and the Soviets in the twentieth century?

For those of us who have followed Afghanistan closely since the rise of the Taliban in the late 1990s, many of Christopher Whitlock’s observations and conclusions are not surprising. Books coming out around the time of the “Obama Surge” (2009-2011) were already raising alarms and pointing out flaws from the past decade (Seth G. Jones, In the Graveyard of Empires: America’s War in Afghanistan, New York: W.W. Norton, 2010; Bing West, The Wrong War: Grit, Strategy, and the Way Out of Afghanistan, New York: Random House, 2011). As the first announced withdrawal deadline approached in 2014, academics and journalists were already re-framing the insurgency in Afghanistan as a lost war (Daniel Bolger, Why We Lost: A General’s Inside Account of the Iraq and Afghanistan Wars, Boston: Eamon Dolan/Houghton Mifflin Harcourt, 2014; Carlotta Gall, The Wrong Enemy: America in Afghanistan, 2001-2014, Boston: Houghton Mifflin Harcourt, 2014; and Jack Fairweather, The Good War: Why We Couldn’t Win the War or the Peace in Afghanistan, New York: Basic Books, 2014).

Whitlock’s book is an excellent addition to these earlier books, but is unique regarding his sources, which makes his account not only rock-solid but also devastating in its revelation of the mismatch between private and public statements that emerged very early on in the conflict. A Washington Post reporter, he used freedom of information laws to acquire previously unpublished notes of interviews with a “Lessons Learned” report of the Office of the Special Inspector General for Afghanistan Reconstruction (SIGAR). He supplemented this with 10,000 documents released as part of an oral-history project of the George W. Bush presidency, based on interviews with key administration officials, outside advisers, foreign leaders, and lawmakers. This account is thus by far the most readable, comprehensive, definitive, and useful in understanding the various mistakes made over the course of the insurgency.

Whitlock breaks up his account into six phases spanning the twenty years of the conflict. In the first section entitled “2001-2002: A False Taste of Victory,” he highlights the missed opportunities to capture the Al Qaeda and Taliban leadership at the end of 2001. Bin Laden and other Al Qaeda and Taliban leaders escaped across the border into Pakistan after a botched attempt to capture him at Tora Bora failed. As one of the interviews noted, the U.S. set an impossible goal early on— “to create a stable, American style government in Afghanistan with democratic elections, a functioning Supreme Court, an anti-corruption authority, a women’s ministry, and thousands of newly constructed public schools with a modernized curriculum” (p. 8). Thus, the war shifted from a counter-terrorism operation to an open-ended “nation-building” project that was likely doomed from the very beginning. Besides the failed opportunities, U.S. troops were never able to properly define the opponent, and never understood either the tribal society within which they were operating nor the true motives of a war “waged against people who had nothing to do with 9/11” (p. 20). The U.S. persuaded the assembly of elders and leaders charged with writing a constitution to adopt an American-style system under a president elected by popular vote with a centralization of power in a federal bureaucracy based in Kabul—a structure completely incompatible with traditional Afghan society, a poor decentralized and tribal society completely ill-suited to attempts to spread Western liberal “democracy and freedom.”

In the next section—“2003-2005: The Great Distraction”—Whitlock argues that overconfidence in the rapid defeat of the Taliban allowed the U.S. to prematurely pull some of its best assets from Afghanistan to fight the ill-fated invasion and occupation of Iraq in 2003. It had also become clear early on that Afghanistan lacked the quality of recruits necessary to form a modern American-style military. They were dealing with an illiterate population, with an estimated 80-90% not only unable to read or write, but with some who could not count or distinguish basic colors. Standards were poor, recruits lacked basic skills, the police became shakedown artists, alienating the population they were trained to protect. Few among the coalition could speak any of the major Afghan languages and most were unfamiliar with Islam and the local culture. Perhaps most importantly, neighboring Pakistan chose to hedge its bets, based on previous experience with the United States during the anti-Soviet jihad in the 1980s. Pakistanis thus ended up playing both sides during the conflict, allowing the Taliban and Al Qaeda safe haven in the country and funding forces fighting and even killing NATO forces. Obsessed with the need for “strategic depth” to counter their most feared adversary—India—Pakistan never intended to abandon a group that it had played a major role in creating back in the mid-1990s.

The next section—“2006-2008: The Taliban Comes Back”—recounts the increasing official denials that the war was deteriorating, and that “the Americans still failed to grasp the forces behind the insurgency” (p. 101). According to several sources, there were many tactics, but no coherent long-term strategy. The International Security Assistance Force (NATO) also suffered from bureaucratic dysfunction, attempting to coordinate operations among 37 countries with short tours of duty and little direct U.S. leadership and direction. Around this time, it was also clear that neither the U.S. nor the Afghan government under Hamid Karzai was able to disarm and remove corrupt and thuggish warlords like General Abdul Rashid Dostum, nor control the opium trade that accounted for a huge sector of the Afghan economy and 80 to 90% of the world’s opium. Attempts at poppy eradication ended up fueling the insurgency even more.

Barack Obama inherited what he still called ‘the good war’ when he became president in 2009. Whitlock titles this section “2009-2010: Obama’s Overreach.” Obama’s generals and advisors eventually convinced him to oversee a “surge strategy” like that in Iraq 2006-2007, which had effectively ended the violence in that country. However, it turned out to be an ineffective and inappropriate strategy for Afghanistan. Whitlock also examines the economic mismanagement of what he calls “a Dark Pit of Endless Money.” Simply put, the U.S. and other actors were pouring far more money into the country than it could possibly absorb, leading to corruption, unaccountability, inappropriate projects, overpriced contractors, and an alienated population. “Of all the flaws with the Afghanistan nation-building campaign—the waste, the inefficiency, the half-baked ideas—nothing confounded U.S. officials more than the fact that they could never tell whether any of it was actually helping them win the war” (p. 167). To make matters even more complicated, the West’s favored Afghan leader – Hamid Karzai – eventually became disillusioned with the United States, increasingly corrupt and paranoid, and ultimately oversaw a highly flawed and disputed election that he clearly helped to rig, leading to a permanent crisis in leadership and political legitimacy from which the country has never recovered.

In “2011-2016: Things Fall Apart,” Whitlock recounts the gradual unraveling of the counterinsurgency, which is ironic, given the successful operation that found and killed Al Qaeda leader Bin Laden in May of 2011, one of the major aims of the invasion ten years earlier. Unfortunately, the drift in U.S. policy had already increased to a degree that the U.S. would then spend the next ten years manipulating statistics and outright lying to the American public about the course of the war. Meanwhile, attempts at building and training an effective Afghan security force continued to fail, with poor quality of recruits, high rates of attrition, and high casualty rates for those that remained. The policy of “Afghanization” ultimately failed to create either a functioning, legitimate government or an effective army or policy force. On December 28, 2014, when U.S. and NATO officials held a ceremony keeping to Obama’s earlier timetable for withdrawal, almost 11,000 American troops remained in Afghanistan, a number of them staying on until the final withdrawal in August 2021. However, the war was nowhere near a conclusion. “The bald-faced claims to the contrary ranked among the most egregious deceptions and lies that U.S. leaders spread during two decades of warfare” (p. 228).

In the final section (“2017-2021: Stalemate”), Whitlock examines the policies of the Trump Administration. Contrary to his own statements and campaign promises going back to 2011, Trump ended up following his national Security Advisor and Defense Secretary’s advice to increase troop levels to 14,000 and step-up bombing campaigns, although nothing was able to stop the slow but steady advance of Taliban control over greater and greater areas of the country. Most notably, after nearly twenty years the opium trade was flourishing more than ever. As Whitlock put it, “the opium industry had emerged as the unrivaled winner of the longest war in American history” (p. 255). The rest of the book documents the beginnings of negotiations with the Taliban toward a hoped-for power-sharing agreement. The Taliban had opened an office in Qatar in 2013, and eventually the U.S. would authorize direct, high-level talks with the Taliban there in July 2018. The final year, concluded on February 29, 2020, resulted in a complex agreement to end the war. The U.S. pledged to withdrawal all troops by May 2021, while the Taliban promised to begin direct negotiations with the Ghani regime and assured the U.S. that Afghanistan would not be used to launch attacks on the United States. But it was finally left to the new administration of Joe Biden, one of the earlier skeptics of the war, to announce on April 14, 2021, that the U.S. would withdraw all troops by the symbolic date of September 11, 2021. While sharing Trump’s intent to finally “pull the plug,” the ensuing botched withdrawal will likely be seen as one of the greatest foreign policy blunders in recent United States history, with long-term geopolitical implications.

Whitlock’s book ranks among the best so far, weaving together direct quotes and observations from hundreds of participants and observers in a devastating portrayal of a “good war” gone bad. Besides its readability, I would recommend The Afghan Papers to anyone looking for a comprehensive and clear overview of the counterinsurgency and the various mistakes made. It also complements other recent histories of the conflict (for example, David Loyn, The Long War: The Inside Story of America and Afghanistan Since 9/11, New York: St. Martin’s Press, 2021 and Carter Malkasian, The American War in Afghanistan: A History, New York: Oxford University Press, 2021). While some dispute the “myth” of Afghanistan as a “graveyard of empires,” arguing that different policy decisions early on could have led to different and more successful outcomes, the American experience unfortunately seems to have continued that historical curse. It remains to be seen how not only the United States, but neighboring Russia and China may have to act should the country become unstable and serve as a safe haven for future violent jihadi actors.