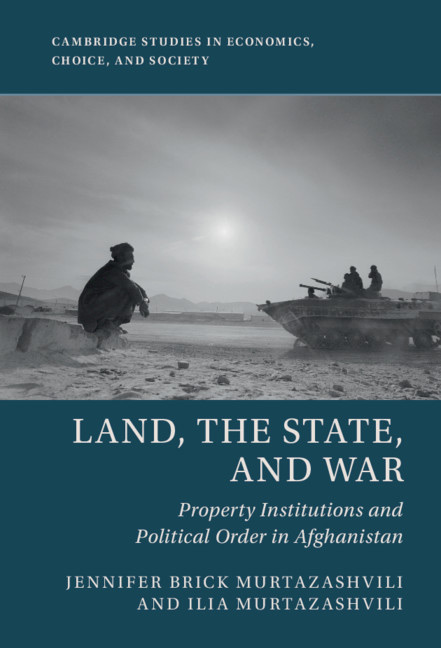 Land, the State, and War
Property Institutions and Political Order in Afghanistan
By Jennifer Brick Murtazashvili and Ilia Murtazashvili
eTextbook Hardcover
This book review is a web exclusive for the Spring 2022 issue of The Independent Review.

The contribution of land, and its efficient management, to the economic development process has been recognized by economists for hundreds of years. The eighteenth-century Physiocrats identified the value of land for agricultural production, and these insights were refined by classical economists, such as Adam Smith and David Ricardo, who regarded land as a generalized source of wealth and rent. The neoclassical economics that emerged during the twentieth century treated land as a production factor, alongside inputs such as labor and capital. During the last few decades sub-disciplines of spatial economics and economic geography have arisen as researchers come to recognize land not only as a physical site for production, but as a source of value and amenity in its own right.

Economic considerations of land have long interwoven with broader political and philosophical questions, especially with regard to the extent of freedom of human agency to own, use, and voluntarily transfer land, and the resources that it provides. Some of the earliest expositions of liberalism considered the ethical priority of property rights, and the beneficial consequences springing from the freedom afforded to individuals in maintaining the right to control their rightfully acquired properties as they see fit. Even so, it was recognized that property rights in actually existing societies possessed a contingent quality, in the sense that one’s sense of security in their property rights depends upon the quality of formal and informal institutions. It is difficult to robustly grow an economy if the holders of property are forever on guard against exploitation and predation. Lessons are also being learned about the risks associated with exogenously imposed “institutional transplantation” projects, wherein property rights management regimes endorsed by national governments and international aid agencies run roughshod over informal-yet-effective traditions and practices of knowing “mine and thine” in regards to land.

A host of vital issues with respect to land management and property rights are addressed in the latest book by Jennifer and Ilia Murtazashvili, entitled Land, the State, and War: Property Institutions and Political Order in Afghanistan. The objective of the book, to study the attributes and implications of property rights to land, is clearly outlined at the outset, as is the analytical approach that is to be pursued in the book’s eight chapters. Relying upon a mixture of public choice and institutional economic insights, it is indicated that the central theoretical approach is “a comparative institutional analysis of formal organizations (such as a state) and informal organizations (such as a tribe, village, or gang)” (p. 5). The significance of this approach is that it can applied for the purpose of assessing the relative capacities of property rights, either formally or informally, to emerge under a range of economic, political, and social conditions.

What is especially distinctive about this book is that it examines the property rights to land situation in Afghanistan, a country at the intersection of central and south Asia with a troubled recent history. Material prosperity has largely eluded the majority of Afghan people, whose lives have been restricted by expropriating monarchies, communist, and Islamist political regimes. The troubles afflicting this country have only been compounded by foreign military (mis)adventurism over time, more recently on the part of the Soviet Union and, later, by American and allied forces. As indicated in Land, the State, and War, in between the rule by the extremist Taliban the installed national regime earned the healthy disrespect of the Afghan citizenry, as land grabbing and corruption in the courts and public administration festered. Given the relevance of productive land use and secure property rights for broad-based prosperity, it is vital to consider to what extent Afghans have managed their land during a most traumatic period in their national history. The authors provide a great scholarly service in extending comparative institutional analysis to a non-Western country, illuminating a surprising array of diverse institutional technologies in the management of land.

Institutional economists are aware of Hernando de Soto’s contributions to the relation between property rights and economic development. In particular, I refer to the proposition that legal titling of property is viewed as central to providing formal recognition of land ownership, in turn providing collateral for loans that facilitate investment and, ultimately, growth. Jennifer and Ilia Murtazashvili refer to episodic commitments by Afghan national governments, including during the 2014–2021 presidency of Ashraf Ghani, to promote this particular reform initiative. However, the implementation and, ultimately, the effectiveness of legal titling reform proved elusive in Afghanistan. Central to this failure, according to the authors, was the lack of governmental capacity to properly define and enforce property rights which, then, fed into the lack of credibility attached to the process. This example informs the broader message of Land, the State, and War. Political challenges in establishing formal property rights to land rest in deficiencies with respect to: monopoly on authority; administrative and enforcement capacities; constraints on key political, bureaucratic, and legal decision makers; and, the degree of inclusivity in legal-political institutions.

It is impossible to consider the quality of Afghanistan’s economic institutions in the absence of discussion about the effects of communist rule. The People’s Democratic Party of Afghanistan swept to power in 1978 in a coup, and attempted to instigate a comprehensive program of land redistribution. The consequences of this top-down expropriation of property rights were devastating. People were forcibly relocated from their land, with adverse consequences for agricultural production in the most fertile areas of the country. Land redistribution also flouted long-held traditions and religious precepts which forbade the involuntary transfer of land, and this naturally fostered enmity and distrust in the ruling communists: “the attempt at land redistribution led directly to the emergence of an antistate, anticommunist, Islamic-oriented insurgency that would come to be known as mujahideen” (pp. 81–82). This book underlines the crucial lesson that the practice of communism in actually existing societies works in ways that are typically far removed from the idealized imaginings of its most ardent supporters.

Top-down governmental efforts to enshrine property rights in Afghanistan have been difficult to implement. To a nontrivial extent this is unsurprising, given the political mistrust resulting from many decades of economic abuse of Afghans by predatory governments. Even now, it is suggested that many Afghan people do not trust administrative and enforcement functions in property, such as central government agencies, the courts, and police. In spite of the problems posed by political exploitation, what Jennifer and Ilia Murtazashvili find is an impressive array of nonstate property rights arrangements that have allowed Afghan individuals and households to register, keep, and trade their lands. Those arrangements have proceeded largely in accordance with customary traditions, which has contributed to the emergence of nested, informal practices pertaining to registration and documentation of properties, and the involvement of local community members in dispute settlement over parcels of land.

It is crucial to also appreciate that the informal, and nonstate, property rights regimes described here appear to satisfy the criteria for effective property rights. That is to say, “they possess the capacity to resolve conflicts over land disputes, when their key decision makers face constraints, and when the institutions for local collective action are inclusive” (p. 91). While the customary property rights regime is far from foolproof, it nonetheless maintains its resiliency because “it coordinates capacity to provide public goods through agreed-upon rules for contributions for providing specific goods” (p. 113), including the assignment of responsibility for dispute resolution to esteemed individuals (including, but not exclusively, religious figures) in local communities. These arrangements help build trust and foster localized cooperation in stressful environments. The discussion presented in Land, the State, and War represents an important landmark in studies concerning institutional economics and especially analytical anarchism. The originality of this book is reinforced by the unique ethnographic approach pursued in the study of self-governance approach to land management and property rights.

The return of the Taliban to power in 2021, with its fearful reputation for violently enforcing Sharia law, means that the prospects of a secure, prosperous Afghanistan remain clouded. As illustrated in Land, the State, and War, the economic outlook will hinge greatly upon the ability of the Afghan people to coordinate over the issue of land management, bringing recognition to who owns what. Jennifer and Ilia Murtazashvili have provided a meaningful contribution to the literature on the capacity of informal institutions to robustly facilitate self-governance over land, a significant asset class in its own right. This book would be of enormous interest to economists, political scientists, legal scholars, and sociologists; indeed, anyone interested in how people creatively manage their economic affairs, even in the most trying circumstances of war and conflict.

Mikayla Novak
Australian National University
AfghanistanDefense and Foreign PolicyLaw and LibertyProperty Rights, Land Use, and ZoningRegulation
Subscribe Buy This Issue Get the App