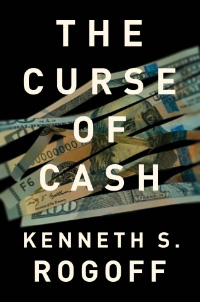 In The Curse of Cash, Ken Rogoff makes the case for getting rid of hand-to-hand currency. The argument is relatively straightforward. Cash, according to Rogoff, is used primarily to buy and sell illegal goods and services and to evade taxes. It also places a lower bound on interest rates, thereby limiting the extent to which the monetary authority can prevent recessions. As such, he argues, we would be better off without it.

With this in mind, Rogoff offers a simple proposal to eliminate cash. Large denomination notes—such as hundred- and fifty-dollar bills in the United States—could be eliminated immediately because they are so rarely used in the formal, legal economy and because those who do use them can switch to smaller-denomination notes at little cost. Smaller-denomination notes—such as twenties, tens, and fives—would be phased out over a longer period of time, perhaps a decade or more. Over this period, Rogoff maintains, poorer, unbanked Americans who rely heavily on cash would have plenty of time to transition to a cashless world. Governments might even encourage the transition, he suggests, by subsidizing deposit accounts or requiring direct deposit for welfare recipients. And, if some degree of financial privacy is desirable, we might choose to keep low-valued coins in circulation. Coins, he reasons, are only a little costlier for making routine transactions but significantly more cumbersome for holding and transporting large sums, as criminals are apt to do with large-denomination notes.

Rogoff’s work is subtle and sophisticated. He anticipates many counterarguments and heads them off to the extent possible. Nonetheless, I find three major shortcomings in the work: the evidence on the extent to which cash is employed by criminals and tax cheats is flimsy; the net benefits of eliminating crime and tax evasion are overstated; and it is not clear that cash prevents the central bank from conducting effective monetary policy.

In coming up with the share of currency held by firms for legitimate purposes, Rogoff relies on a simple back-of-the-envelope calculation offered by Richard Porter and Ruth Judson more than two decades ago. In a footnote, they write:

Most businesses need nothing more than seed cash to operate, and the total amount of such cash is not likely to be significant, as the following calculation shows. Almost 2.7 million retail establishments existed in 1992. Taking certain elements of cash use at supermarket chains as the standard for all retail establishments that year, assume that each establishment had ten cash registers (currently the median number for supermarket chains) and each register contained $200 of seed cash (the amount that at least one large supermarket chain uses for that purpose); then the total currency holdings by all retail establishments would have been only $5.4 billion, or 1.8 percent of the total stock of currency at the end of 1992. If, in addition, one business days’ worth of total consumption was always in transit to depository institutions, the total amount from both of these sources would have been only $22.3 billion, or only 7.7 percent of total currency holdings in that year. (“The Location of U.S. Currency: How Much Is Abroad?” Federal Reserve Bulletin, October 1996, p. 897)

Taking “the huge trend of decline in cash used for medium and large retail transactions over the past 20 years” (p. 49) as given (without actually citing any evidence), Rogoff suggests that the share of currency held by firms for legitimate purposes is in the neighborhood of 5 percent today. That leaves 44 percent unaccounted for.

Rogoff’s estimate of the share of currency held by consumers for legitimate purposes is even more suspect. He relies on surveys of consumers, who report holding 5 to 10 percent of all outstanding currency. Then, by assuming that any cash that the surveyed consumers do not fess up to holding must be held for nefarious purposes, he concludes that 34 to 39 percent of all currency in circulation is used by criminals.

There are at least two problems with Rogoff’s approach to estimating the share of currency held by consumers for legitimate purposes. First, cash holdings are probably largest among those at the tails of the wealth distribution. The very poor hold nearly all of their financial wealth in cash because it does not pay for them to have a bank account. The very wealthy hold nearly none of their wealth in cash—but because they are so wealthy, nearly none is still a substantial amount. It seems reasonable to expect these two groups are less likely to answer survey questions than those in the middle of the wealth distribution. If so, such surveys likely underestimate the extent to which cash is held for legal transactions.

Second, it is problematic to assume any cash undeclared in surveys is held for nefarious purposes. It is costly to hold cash. You have to keep it secure. Of course, one way to reduce the costs of securing cash is to refrain from telling others that you hold a lot of cash—say, when someone asks you in a survey how much cash you hold. Likewise, some prefer cash because it enables financial privacy. Someone who values financial privacy is presumably less likely to accurately disclose financial information on a survey. Hence, the survey responses likely caused Rogoff to underestimate the extent to which cash is held for legal transactions.

To be sure, Rogoff relies on the best available evidence to estimate the share of currency employed by criminals. Unfortunately, the best available estimates are not very good. Although arguing over a few percentage points might seem pedantic, it actually matters. The more Rogoff underestimates legitimate currency use, the more he overestimates criminal currency use. Hence, the magnitude of the error affects his conclusion in two ways. On the one hand, overestimating criminal use means that the problem he is attempting to solve is smaller than he suggests and, as such, warrants incurring fewer costs to solve. On the other hand, underestimating legitimate use means that the costs of eliminating cash are greater than Rogoff suggests.

Even taking Rogoff’s estimates of criminal use at face value, it is not clear that the costs of criminal activity—and, hence, the benefits of eliminating cash—are as large as he suggests. If one assumes (as Rogoff does) that laws reflect societal preferences, then the act of buying and selling illegal goods and services necessarily reduces social welfare. But it is not so clear that laws reflect societal preferences. If there are bad laws on the books, circumventing those laws increases social welfare. At the very least, Rogoff’s assumption makes for some odd social welfare calculations. Purchasing marijuana in Ohio, where it is a crime, results in a net cost to society. The same transaction is counted as a net benefit in Colorado, where marijuana is legal.

Much the same can be said about tax evasion. In Rogoff’s view, a government raises revenue to provide valuable goods and services and designs the tax code such that the burden of taxation is born appropriately by all of its citizens. As such, circumventing the tax code by employing cash to avoid sales tax or underreport income takes us away from the government-established ideal. But what if government is not so benevolent? In that case, access to cashmight serve as a useful constraint on the size and scope of government. Once again, what Rogoff sees as a cost might just as easily be counted as a benefit.

Last, I take issue with Rogoff’s claim that cash prevents the central bank from conducting effective monetary policy. Rogoff argues that, at a sufficiently negative interest rate, the monetary authority is unable to lower rates further because individuals will revert to cash in order to avoid paying interest on their deposit holdings. If effective monetary policy requires lower rates, the monetary authority will be unable to deliver.

Ken Rogoff makes the best possible case for eliminating hand-to-hand currency. But, in doing so, he likely overestimates (1) the extent to which currency is used by criminals, (2) the net benefits of eliminating criminal activity, and (3) the benefits from more effective monetary policy. Because Rogoff does not provide a true cost–benefit analysis, it is difficult to determine whether the magnitude of these errors is sufficient to undermine his conclusion. At the very least, the existence of such shortcomings should give one pause before engaging in the radical reform Rogoff recommends.