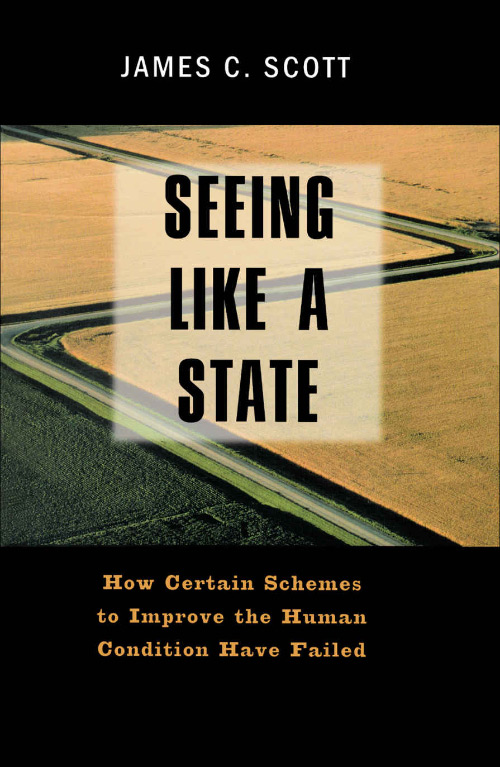 Seeing Like a State
How Certain Schemes to Improve the Human Condition Have Failed
James C. Scott
Kindle Hardcover Paperback Audiobook Audio CD
This book review appeared in the Summer 2000 issue of The Independent Review.

James Scott is an anthropologist and political scientist. His Seeing Like a State is largely about the failure of planning in modernist cities such as Chandigarh in India and Brasilia in Brazil, and of collectivized agriculture, particularly in the Soviet Union and Tanzania. He rightly identifies these failures as the result of what F. A. Hayek called “scientism” and the planners’ hubris in assuming that they had or could acquire the requisite knowledge for their social engineeringa point that Hayek and Ludwig von Mises made in the 1930s in the famous planning debates and which progressives ignored. Worse was the planners’ arrogance. They regarded “themselves as far smarter and farseeing than they really were and, at the same time, regarded their subjects as far more stupid and incompetent than they really were” (p. 343).

Scott identifies four features that he claims are necessary for these social-engineering disasters, which have taken or blighted millions of lives.

The first element is the administrative ordering of nature and society. . . . The second element is what I call a high-modernist ideology. . . . The third element is an authoritarian state that is willing and able to use the full weight of its coercive power to bring these high modernist designs into being. . . . A fourth element is closely linked to the third: a prostrate civil society that lacks the capacity to resist these plans. (pp. 4–5)

All this is fairly uncontroversial today. His panacea, various forms of localism, is much less so.

The book is finally rather disappointing for two different reasons. First, for classical liberals brought up on Hayek and Michael Oakeshott’s workand, if I may immodestly add, those who have read my own book The Poverty of “Development Economics” (2d expanded ed., Cambridge, Mass.: MIT Press, 2000)the book contains nothing new. If, however, it helps anthropologists and political scientists to see these truths, that result is all to the good.

But in this respect the book is doubly disappointing. For while correctly noting that its argument “may appear to be a case for the invisible hand of market coordination as opposed to centralized economies” (p. 351), Scott refuses to accept the conclusion that inevitably follows, relying instead on the foolish views of Karl Polanyi in The Great Transformation (Boston: Beacon, 1957). Thus he states on the same page:

The market is itself an instituted, formal system of coordination, despite the elbow room it provides to its participants, and it is therefore similarly dependent on a larger system of social relations which its own calculus does not acknowledge and which it can neither create nor maintain. Here I have in mind not only the obvious elements of contract and property law, as well as the state’s coercive power to enforce them, but antecedent patterns and norms of social trust, community, and co-operation, without which market exchange is inconceivable.

I have argued elsewhere (Unintended Consequences [Cambridge Mass.: MIT Press, 1998]) that this view, common among sociologists and anthropologists, is false. The trading instinctwhat Sir John Hicks used to call “the Economic Principle” (when presented with an opportunity to gain an advantage, people take it)goes back to the Stone Age. It is part of our basic human nature. The community, trust, and so forth that so impress sociologists are later outgrowths that appeared once settled agriculture led to a widening of the market. The market itself, a spontaneous order in Hayek’s sense, dependent purely on this trading instinct, predates settled agriculture (see Matthew Ridley, The Origins of Virtue [London: Penguin, 1996]).

Equally disappointing is to find that, despite references to Oakeshott (a Cambridge and LSE don wrongly described on p. 431, n. 90, as an Oxford don), Scott makes no use of Oakeshott’s important distinction between the two rival views of the state in Western thought: the state as an “enterprise” association (part of the West’s Judeo-Christian heritage) and the state as a “civil” association (going back to the Greeks). The high-modernist enterprises Scott discusses are nothing else but manifestations of this “enterprise” vision, which could only begin to be implemented once the sixteenth-century administrative revolution provided the state with the means to be enterprising by creating what Scott calls “the legibility of society.” The alternative view of the state is that held by classical liberals. Most of the planning disasters, as Scott notes, have been the result of “progressive” plans to use the state to create some utopia. The only way to prevent such projects is to eschew the corresponding view of the state. But given the continuing deep though confused resonance of its Christian past, the Westand progressives such as Scottstill hanker after some way of implementing a progressive enterprise, perhaps through some elusive Third Way.

My final complaint is that the author neglects economics and economists. The admirable work of Vernon Ruttan on agriculture is cited, but the only other economist to be cited on these pages is the radical-leftist Harvard economist Stephen Marglin. This neglect is a pity in many ways. Apart from fulfilling the scholarly duty to take account of the vast and serious literature on many of the topics Scott discusses, attention to that literature would have sharpened some of Scott’s argument and allowed him to see how what he finds paradoxical can be, and has been, explained by economists. In one example of this neglect, he writes, “The question we shall address in this chapter is why a model of modern, scientific agriculture that has apparently been successful in the temperate industrializing West has so often foundered in the Third World” (p. 263), and then presents a section on the practice of slash-and-burn agriculture in Africa. No one can make sense of this continuing practice without reading Ester Boserup’s great book The Conditions of Agricultural Growth (London: Allen and Unwin, 1965), which shows the connection between population density and the adoption of more intensive agricultural techniques. The importance of local knowledge, which Scott rightly emphasizes, is all well and good, but a deeper explanation is provided by the differing historical population densities in Eurasia and Africa. Why, in turn, those differences arose is brilliantly explained in Jared Diamond’s Guns, Germs, and Steel (New York: Norton, 1997).

Although I am in sympathy with Scott’s diagnosis of the development disasters he recounts, I conclude that he has not burrowed deep enough to discover a systematic cause of these failures. (In my view, that cause lies in the continuing attraction of various forms of “enterprises” in what at heart remains Western Christendom.) Nor is he right in so blithely dismissing the relevance of classical liberalism in finding remedies for the ills he eloquently describes.