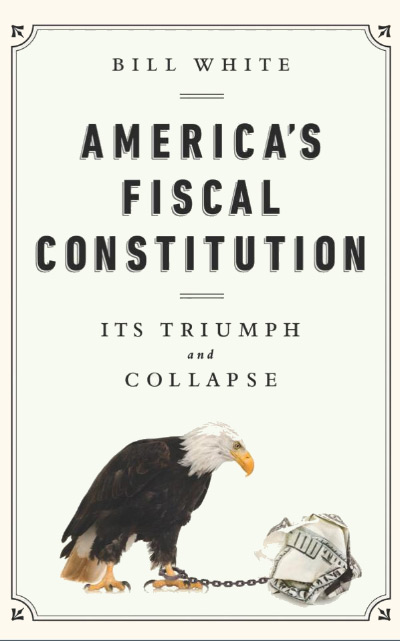 America’s Fiscal Constitution
Its Triumph and Collapse
Bill White
Kindle Hardcover
This book review appeared in the Fall 2014 issue of The Independent Review.

Bill White is a former three-term mayor of Houston who lost the Texas gubernatorial election to Rick Perry in 2010. The book jacket identifies him as a “fiscally conservative politician” and a Democrat by party. His educational background includes an undergraduate degree in economics from Harvard University and a law degree from the University of Texas. Since his loss to Rick Perry, he obviously has been busy writing a detailed economic and political history of American fiscal policy with an emphasis on deficit finance. The book is loaded with relevant history, humorous anecdotes, and thirty-eight pages of interesting tables on debt. I found the book informative but somewhat frustrating at the same time due to its omissions and incorrect assessments.

The book provides an interesting look at American fiscal policy through time and gives insights into the behavior and attitudes of presidents and their appointees. I think White is spot on in identifying the costs of the rapidly rising public debt and why we need reforms. I think he is weakest in identifying the cause of our new fiscal constitution and the appropriate remedies needed to correct the situation.

White identifies what he calls America’s “unwritten fiscal constitution” that for most of U.S. history received widespread support from all major political parties. It consisted of four generally accepted reasons for deficits: borrowing to preservethe union, borrowing to expand and connect the nation’s borders, borrowing to wage war, and borrowing during severe downturns. He identifies four pillars that reinforced the unwritten fiscal constitution: clear accounting, “pay-as-you-go” budget planning, the establishment of trust funds financed entirely with dedicated revenues, and explicit congressional approval of debt for specific amounts and purposes.

After reviewing history that shows how the pillars supported the unwritten fiscal constitution, White argues that the nature of fiscal budgeting changed after 2000. Never before had the government waged a prolonged war without raising taxes, financed a vast new entitlement program entirely with debt, substituted federal debt for payroll contributions supporting Social Security, and had members of both parties claiming that balancing the budget in normal economic conditions would damage the nation’s long-term economic growth (p. x).

Oddly, the book doesn’t spend any time defining the public debt. I know of at least three different measures for measuring the public debt, and one of them includes unfunded liabilities. This is the nine-hundred-pound gorilla in the room and is the result of “pay-as-you-go” budgeting, one of the pillars of the unwritten constitution.

I would argue that the unwritten fiscal constitution started to unravel in 1970. Every ten years after 1970, the ratio of public debt to gross domestic product (GDP) increased (using the gross public-debt measure). I do not think it is a coincidence that President Richard Nixon declared that he was a Keynesian around 1970 and that public debt relative to income started its secular climb then. Fiscal policy in 2000 and beyond was merely the logical consequence of Keynesian ideas that had deepened their roots some thirty years earlier.

White relates many interesting historical events that have relevance for today. I will share a few and let interested readers discover others on their own. The real estate bubble that brought the U.S. economy into the Great Recession wasn’t anything new. Real estate bubbles that burst in the nineteenth century played roles in a number of U.S. downturns, and they are identified in the book. These bubbleinduced recessions did not produce substantial and permanently higher ratios of public debt to GDP.

A cut in whiskey taxes after the Civil War gives a nice example of the Laffer curve. Although taxes were cut 75 percent, tax revenues surged.

Democrat Grover Cleveland was the veto president. He read each bill and vetoed hundreds of spending bills. He opposed the use of tax dollars to relieve individual suffering, saying that “though the people support the government, the government should not support the people” (qtd. on p. 123). Budget surpluses under Cleveland led him to propose a tax cut in 1887. Opponents of cutting taxes won the day. Economists might ask their students why there would be opposition to a tax cut. The answer: because these taxes were tariffs. Tariffs were the primary source of tax revenues in the nineteenth century. Industries that benefited from the tariffs were politically powerful and were able to block the tariff reductions. Consumers, of course, were the losers.

Franklin D. Roosevelt, a former insurance executive, favored a Social Security program modeled after an insurance annuity. FDR was against early payouts to pensioners who did not pay in. Republican senator Arthur Vandenberg, a former newspaper publisher, wanted a pay-as-you-go system that allowed payouts to persons who contributed nearly nothing into the Social Security Trust Fund. Vandenberg won out and today the unfunded liabilities of the pay-as-you-go Social Security and Medicare programs are around $50 trillion. This shortfall will require massive tax increases or massive cuts in benefits down the road. From this standpoint, it is hard to understand White’s fondness for pay-as-you-go budgeting.

In another interesting episode, Roosevelt, angry with the Supreme Court for vetoing some of his New Deal legislation, sought to expand the size of the Supreme Court by adding pro-administration judges (p. 198). In parallel, Richard Nixon nearly forty years later spread rumors that he wanted to increase the size of the Federal Reserve Bank Board of Governors to get more supporters on the board. Both FDR and Nixon won out. The Court under FDR became less aggressive in restraining New Deal legislation, and Federal Reserve chair Arthur Burns caved in to Nixon’s wishes to expand the money supply.

Worrying about financing World War II, Roosevelt proposed to his advisers in 1942 that individuals earning more than $25,000 and families earning more than $50,000 face marginal tax rates of 100 percent. Fortunately for the country, Roosevelt was talked out of what would have been a disastrous test of the Laffer curve.

Not unexpectedly, White concludes that much of the debt problem is Republican. Under Nixon’s watch, “the federal government consolidated the Social Security Trust Fund with the administrative or federal funds budget in 1969. Muddled and opaque accounting for the Social Security and Medicare trust funds would eventually create an illusion of surplus that facilitated the collapse of the American Fiscal Tradition” (p. 197).

George W. Bush receives his due share of the blame for getting the deficitspending party going full blast. Meanwhile, Democrats get away relatively unscathed. We do hear about “Clinton and his talented wife, Hillary” (p. 317). Fortunately for President Clinton’s legacy, Hillarycare wasn’t adopted during his presidency. Obamacare and wasted public expenditures on such things as “Cash for Clunkers” and uneconomic subsidies for companies offering alternative energy sources, such as Solyndra, go unnoticed in contrast to McKinley’s tin plate fiasco.

The worst aspects of the book, in my opinion, are the solutions to the problem. White, like most politicians, fails to recognize that tax loopholes, formally called taxexpenditures, are nothing more than hidden subsidy programs. His defense of tax loopholes is pathetic (p. 408). If we want a transparent tax system, put line items into the budget for these subsidies. Collect taxes without the loopholes and then send subsidy checks out equal to the loophole benefits. We’ll see how long these subsidy programs last when people see how large they are and who gets them.

Worse yet is White’s idea for the Federal Reserve Bank’s playing a “constructive role” in the future. “The monetization of some amount of debt by the Federal Reserve might play a role in a realistic and durable plan to balance the budget. Monetized debt reduces the net cost of debt service” (p. 410). This is a policy recommendation befitting Zimbabwe. The Fed already monetizes debt every year and in so doing grows the monetary base and the money supply, ideally at a rate to achieve price stability. To do more of the same to help out budget deficits is a scenario for an inflationary disaster.

All in all, I found the book to be a worthwhile read, especially the parts dealing with the political and economic history of fiscal policy. However, I conclude, differently from the author, that America’s unwritten fiscal constitution collapsed precisely because it was unwritten. In my opinion, a carefully written fiscal constitutional amendment would be the solution.