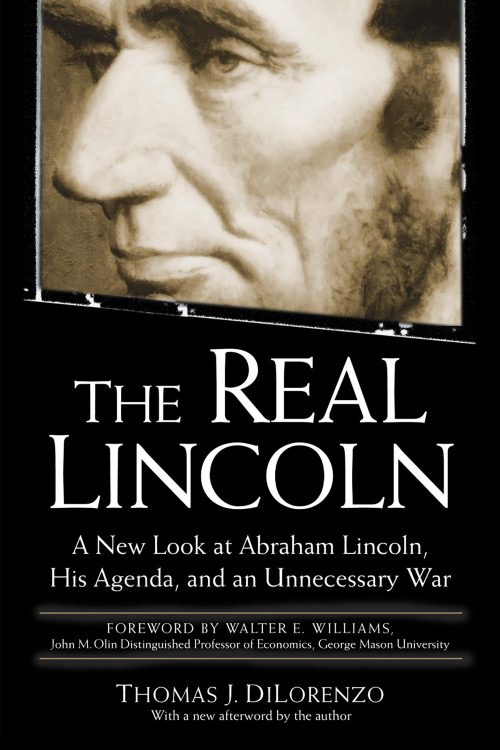 The Real Lincoln
A New Look at Abraham Lincoln, His Agenda, and an Unnecessary War
Thomas J. DiLorenzo
Kindle Hardcover Paperback Audiobook Audio CD
This book review appeared in the Spring 2003 issue of The Independent Review.

Cynics learn through harsh experience to be skeptical of any book promising the “real” history behind a controversial figure such as Abraham Lincoln. It hardly seems possible that there is more to say about someone who has been subjected to such minute scrutiny in thousands of books and articles. Yet Thomas J. DiLorenzo’s The Real Lincoln manages to raise fresh and morally probing questions, challenging the image of the martyred president that has been fashioned carefully in marble and bronze, sentimentalism and myth. In doing so, DiLorenzo does not follow the lead of M. E. Bradford or other Southern agrarians. He writes primarily not as a defender of the Old South and its institutions, culture, and traditions, but as a libertarian enemy of the Leviathan state. DiLorenzo holds Lincoln and his war responsible for the triumph of big government and the birth of the ubiquitous, suffocating modern U.S. state. He seeks to replace the nation’s memory of Lincoln as the “Great Emancipator” with the record of Lincoln as the “Great Centralizer.”

In ten concise chapters, DiLorenzo attempts to demythologize Lincoln’s reputation as the humanitarian benefactor of the slaves and the judicious statesman who preserved, protected, and defended the Union and the Constitution in their hour of greatest crisis. With the flair and passion of a prosecuting attorney delivering closing arguments to a hostile jury, he exposes Lincoln’s embarrassing views on race, his ambition for economic nationalism, his rewriting of the history of the founding of the nation, his cavalier violation of constitutional limits on the presidency, and his willingness to wage a barbaric total war to achieve his ends. DiLorenzo argues that Lincoln opened the gates of war and plunged his fellow countrymen, North and South, into four years of misery and death not to preserve the Union as it was or to free the slaves, but to advance his own, his party’s, and his constituency’s power. In many ways, The Real Lincoln is a sobering study in power and corruption.

For those familiar only with the deified Lincoln of the copper penny, the Lincoln Memorial in Washington, D.C., or the portrait on the classroom wall, DiLorenzo’s catalog of Lincoln’s racial views, for example, will come as something of a shock. The Real Lincoln ventures to cure the selective amnesia Lincoln’s defenders have promoted. DiLorenzo provides evidence that Lincoln, very much a man of his time and not a visionary prophet, never favored social equality for blacks. Throughout his political career and into the war, Lincoln promoted overseas colonization of freed slaves, for the most part opposed the extension of slavery into the territories so that the land would remain open for white settlers, and promised never to touch slavery in the Southern states. When Lincoln finally did embrace emancipation, he adopted it as a pragmatic war measure, subordinating the freedom of slaves to winning the war and maintaining the Union.

Judged by his actions rather than his words, Lincoln’s “real agenda,” according to DiLorenzo, emerges as primarily economic, not humanitarian. Lincoln inherited his political agenda from his role model, Henry Clay, the leader of the Whig Party who promoted a vision of national economic development called the “American System.” In large part a resurrection of Alexander Hamilton’s fiscal and industrial policies, the American System advocated protective tariffs, a national centralized banking system, and federally subsidized internal improvements. DiLorenzo sees this scheme as a revival of European-style imperial mercantilism—a revival that, once victorious, sent the United States hurtling toward statism. He argues forcefully that Lincoln waged war from 1861 to 1865 with a single-minded determination to remove the South’s obstructionist Jeffersonian principles of strict construction, states’ rights, local autonomy, limited government, and free trade.

In the remaining chapters, DiLorenzo tackles secession, Lincoln’s assumption of dictatorial “war powers,” his resort to total warfare, the ugly story of Reconstruction, the merciless Indian wars on the frontier, and the continuing legacy and costs of Lincoln’s political agenda and abuse of power. The chapter on secession most clearly indicates the book’s potential to open minds to supposedly unthinkable possibilities and helps to recover the lost language and logic of states’ rights. The quotations from Jefferson, Madison, Hamilton, John Quincy Adams, and Alexis de Tocqueville eloquently answer the arguments of those who would claim that postwar apologists for the Old South in large part fabricated the right of secession in retrospect. DiLorenzo effectively summarizes Northern editorial opinion on the eve of the war, a surprising amount of which was sympathetic to the Southern cause, favorable to secession, and unwilling to have the once-voluntary Union held together by force and violence. The bad news for Lincoln’s defenders is that the documentary evidence here and throughout the book might have been multiplied a hundredfold.

Despite its provocative insights and obvious rhetorical skill, however, The Real Lincoln is seriously compromised by careless errors of fact, misuse of sources, and faulty documentation. Although individually these flaws may seem trivial and inconsequential, taken together they constitute a near-fatal threat to DiLorenzo’s credibility as a historian. A few examples indicate the scope of the problem: DiLorenzo’s own article on Lincoln as “The Great Centralizer” appeared in the The Independent Review in 1998, not in 1988 (p. vii); Lincoln advised sending freed slaves to Liberia in a speech in 1854, not “during the war” (pp. 16–17); Lincoln was not a member of the Illinois state legislature in 1857 (p. 18); the commerce clause was not an “amendment,” and Thomas Jefferson was not among the framers of the Constitution (pp. 69–70); Thaddeus Stevens was a Pennsylvania representative, not a senator (p. 140); and Fort Sumter was not a customs house (p. 242).

Unfortunately, these lapses are more than matched by a clumsy mishandling of sources that violates the presumed trust between author and reader. DiLorenzo claims, for example, that in the four years “between 1860 and 1864, population in the thirteen largest Northern cities rose by 70 percent” (p. 225). On the face of it, this statistic is absurd and defies common sense, and sure enough, the source DiLorenzo cites says that the growth occurred “in fifteen years.” Page 11 says that Lincoln’s law partner and biographer William Herndon was quoting his own recollections of Lincoln, but he really was quoting another biographer. A few pages later (p. 14), DiLorenzo claims that Lincoln, in his eulogy for Henry Clay, “mustered his best rhetorical talents to praise Clay,” but all of the examples that follow come from the “beautiful language” of a newspaper that Lincoln was quoting at length. Moreover, Lincoln’s supposed comment about the “deportation” of blacks in his Cooper Union speech was in fact a quotation from Thomas Jefferson, as Lincoln himself says (p. 18). In chapter 3, DiLorenzo claims that in a letter to Salmon P. Chase, Lincoln “admitted that the original [Emancipation] proclamation had no legal justification, except as a war measure” (p. 37). His source, however, is the recollections of a conversation (not a letter) that portrait artist Francis B. Carpenter (not Chase) had with Lincoln, and at no point do these recollections sustain DiLorenzo’s summary of them. Moreover, in the reference for this section, DiLorenzo misidentifies the title of his source as Paul Angle’s The American Reader, when in fact the jumbled material comes from Angle’s The Lincoln Reader. Other errors include misplaced quotation marks, missing ellipses, and quotations with incorrect punctuation, capitalization, and wrong or missing words.

Further examination of the endnotes leads into a labyrinth of errors beyond the ingenuity of Ariadne’s thread. On page 281, for instance, note 1 cites page 66 of David Donald’s Lincoln, when in fact the quotation comes from page 66 of Donald’s Lincoln Reconsidered. On the next page, note 7 cites Lincoln’s debate with Stephen Douglas at Ottawa, Illinois, on August 21, 1858, but the quotation comes from the debate at Charleston, Illinois, on September 18, 1858. Moreover, hardly a single citation of the Basler edition of Lincoln’s Collected Works includes the volume number (see notes 25, 26, and 33), and several of the remaining citations of the Collected Works turn out in fact to be references to Basler’s Abraham Lincoln: His Speeches and Writings (notes 24, 31, and 44). Note 9 on page 282 again cites Lincoln’s 1858 debate with Douglas at Ottawa, but the quotations this time actually come from Lincoln’s 1852 eulogy for Henry Clay. Note 14 leads down another blind alley to no trace of the quoted material. On page 287, note 3 cites the wrong page number from Donald’s Lincoln, and although note 4 immediately following says “ibid.,” it actually refers to Basler’s Abraham Lincoln. On page 293, DiLorenzo cites Federalist No. 36 as his source, but the quotation comes from Federalist No. 46. Sad to say, this catalog of errors is only a sampling. Readers looking further into the matter will find incorrect titles and subtitles as well as misspelled publishers’ names. Obviously, in view of these problems, the maze of endnotes does not provide the “meticulous documentation” promised by the book’s dust jacket.

As it stands, The Real Lincoln is a travesty of historical method and documentation. Exasperating, maddening, and deeply disappointing, The Real Lincoln ought to have been a book to confound Lincoln’s apologists and to help rebuild the American historical consciousness. Ironically, it is essentially correct in every charge it makes against Lincoln, making it all the more frustrating to the sympathetic reader. DiLorenzo’s love of the chase needs to be tempered by scrupulous attention to detail. Without it, his good work collapses. He is an author of evident courage and ability, but his sloppiness has earned him the abuse and ridicule of his critics. A book such as The Real Lincoln needed to be written, but until it is revised and corrected in a new edition, this is not that book. In the meantime, there is still hope for skeptical cynics.