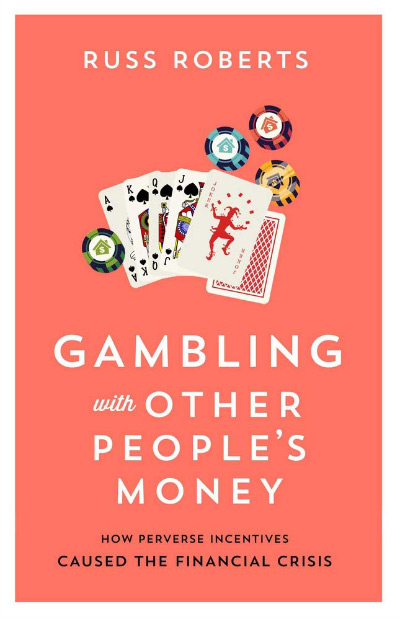 Gambling with Other People’s Money
How Perverse Incentives Caused the Financial Crisis
Russ Roberts
Kindle Paperback
This book review is a web exclusive for the Fall 2019 issue of The Independent Review.

Russ Roberts’s book, Gambling with Other People’s Money, is one of the better primers about the 2008 financial crisis. Originally published in 2009, this reissued edition has aged well. Roberts did his homework when writing it and the work remains relevant today. Roberts’s broad survey of the political and economic landscape leading up to the 2008 financial crisis shows why financial crises are inevitable given the U. S. government’s history of rescuing creditors of financial institutions. While this book remains a good introduction to the crisis, it will also leave more knowledgeable readers frustrated at its limited depth.

Roberts contends that moral hazard enabled the 2008 financial crisis. Reckless borrowing by homeowners was enabled by reckless lenders (such as Countrywide and Golden West). These reckless lenders were enabled by reckless underwriters and mortgage securitizers (Fannie Mae and Freddie Mac, large investment banks), who were in turn enabled by reckless creditors (pension funds, insurance funds, sovereign wealth funds, and other large institutional investors). Their recklessness, Roberts argues, is not surprising or irrational given the U. S. government’s consistent pattern of bailing out creditors of financial institutions for over half a century. From the perspective of the creditors, their lending was the furthest thing from reckless!

And this is where Roberts brings helpful nuance to his story about moral hazard. Many bank executives did not act as recklessly as they could have. Furthermore, there seems to be significant evidence that being bailed out was not a major part of bank executives’ decision-making process—they didn’t think they were risking the very existence of their firms. Despite this, moral hazard was still at the heart of the problem because bailing out creditors distorts the market system. Roberts says: “As Milton Friedman liked to point out, capitalism is a profit and loss system. The profits encourage risk-taking. The losses encourage prudence. When taxpayers absorb the losses, the distorted result is reckless and imprudent risk-taking” (p. 2). Losses impose discipline on the market. Firms that make poor decisions lose money and go bankrupt while firms that generate profit expand. The market itself becomes more efficient through this process as better managed firms survive and wasteful or reckless firms are weeded out. Financial firms, however, are partially exempt from this process. Citibank is the quintessential example. Despite being badly managed and having been rescued multiple times before the 2008 crisis, it grew to be the largest bank with some of the most severe problems during the crisis.

Moral hazard also made creditors more comfortable lending hundreds of billions of dollars to fund the housing bubble and mortgage origination process. Fannie Mae and Freddie Mac are the poster children for this effect. Despite being far more highly leveraged than the riskiest investment banks like Bear Stearns and Lehman Brothers, as well as having even riskier balance sheets, the government-sponsored enterprises (GSEs) could borrow almost as cheaply as the U. S. government because creditors in the market were confident that the U. S. government would pay Fannie’s and Freddie’s debt regardless of what happened to the profitability or net worth of the companies.

Roberts also deals with the objection raised by Jeffrey Friedman and Wladimir Kraus (Engineering the Financial Crisis: Systemic Risk and the Failure of Regulation. Philadelphia, PA: University of Pennsylvania Press, 2011) that banks did not take as much risk as they could have. Most banks concentrated their mortgage-backed securities (MBS) exposure in the safest tranches (AAA and AA), not the riskiest tranches with the highest returns. The main reason they did so, which both works acknowledge, is because capital regulations created by the Recourse Rule and the Basel Accords allowed banks to hold less capital against AA and AAA MBS than against any other asset besides sovereign debt.

But the other reason banks invested in “safer” MBS, Roberts argues, is because bankers are not merely gambling on the highest risk highest return asset. A poker player may win big if he draws an inside straight, but he is likely to lose most of the time. But the poker players sitting in the executive suites at these banks, besides wanting to win on the value of their assets, are also drawing large paychecks from their firms simply for “being in the game.” Bankers have an incentive to reduce the likelihood of failure, but not the magnitude of failure. This is a deep point and worth keeping in mind when discussing the influence of bailouts and moral hazard on executives’ behavior.

No explanation of the 2008 financial crisis can avoid exploring how Fannie Mae and Freddie Mac contributed to the housing bubble (except for the Financial Crisis Inquiry Commission’s official Financial Crisis Inquiry Report (Washington, DC: Government Printing Office, 2011), but that’s another story...). Roberts presents most of the important contributions of the GSEs, highlighting especially how they financed low-quality mortgages and low-quality MBS from the 1990s through the crisis itself. He wonders whether Fannie and Freddie were more cause or effect:

Before 2004, Fannie and Freddie definitely helped inflate the bubble. The question is by how much? Did they make a large difference, or did their growth merely crowd out Federal Housing Administration (FHA) and private mortgage activity? Did their substantial purchases of private label mortgage-backed securities expand the demand, or would other investors simply have made those purchases? These are hard questions to answer in any systematic way. (p. 60)

Yet answered they have been by Peter Wallison (Hidden in Plain Sight: What Really Caused the World’s Worst Financial Crisis and Why It Could Happen Again. New York, NY: Encounter Books, 2016). Wallison shows quite persuasively that Fannie and Freddie, under pressure from the Department of Housing and Urban Development as well as from Congress, reduced underwriting standards for mortgages across the market. They were the proximate cause of down payments falling from the traditional 20% to 3% or less, of proliferating adjustable rate mortgages, and of the massive expansion of mortgage lending to subprime borrowers.

The informed reader, however, will find many topics absent in Gambling with Other People’s Money. You will find hardly any details of what actually happened during the crisis—when various firms failed or were bailed out, when TARP or Fed programs were created, or even what those programs were. There are few details about the structure of various institutions’ balance sheets or stock market movements. There is no explanation of the mechanics of financial crises in general or of the 2008 crisis in particular—the players in the money market, the difference between re-purchase agreements and commercial paper, the rise in haircuts during the crisis, or the role of mark-to-market accounting in generating huge paper losses, fire sales, and debt deflation.

Nor is there anything about the rationale and deliberations of policymakers during the crisis—what they were thinking about, what they feared could happen, who they were feeling pressure from, etc. Finally, the discussion of credit rating agencies is only cursory. Roberts does not talk about how they evolved from an investor pays to an issuer pays model, how they were protected from competition, or how the use of their ratings was mandated by various laws and by regulatory agencies. For a discussion of the credit rating agencies, see Larry J. White, 2010, “Credit-rating Agencies and the Financial Crisis: Less Regulation of CRAs Is a Better Response” Journal of International Banking Law 25, no. 4. For a survey of all the topics raised above, see Paul Mueller, Why the Conventional Wisdom about the 2008 Financial Crisis is Still Wrong (Newcastle: Cambridge Scholars Publishing, 2019).

In summary, Roberts’s book is worth reading as a basic introduction to the moral hazard underpinning the 2008 financial crisis. It’s a fine place to start if one only knows about the crisis from newspaper or journalistic accounts. But those who have spent much time studying the causes and consequences of the crisis may be frustrated by the book’s limited scope and depth.