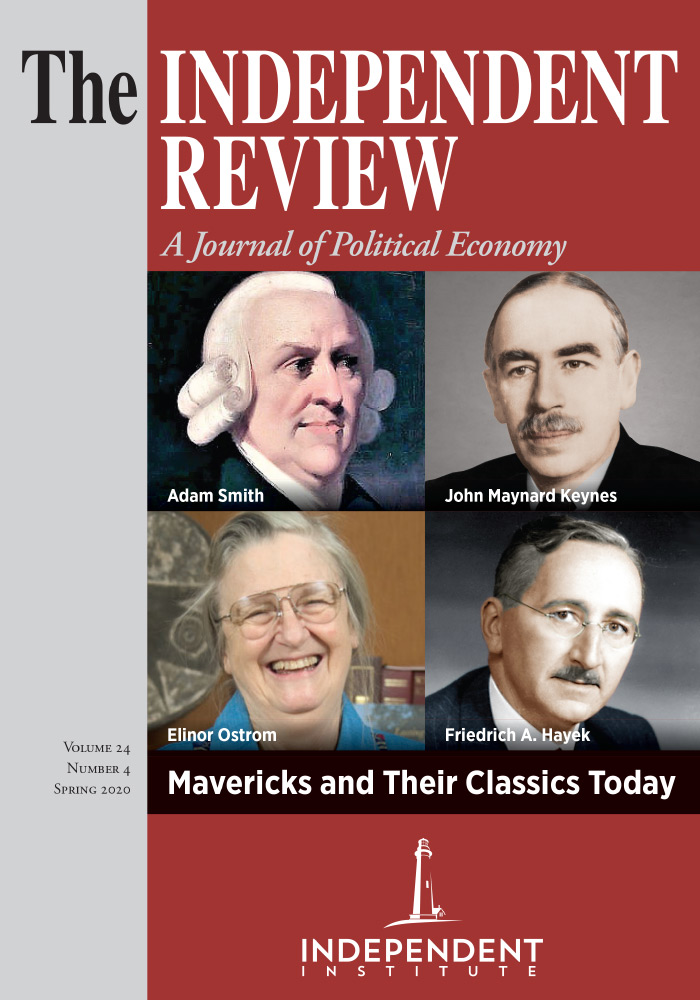 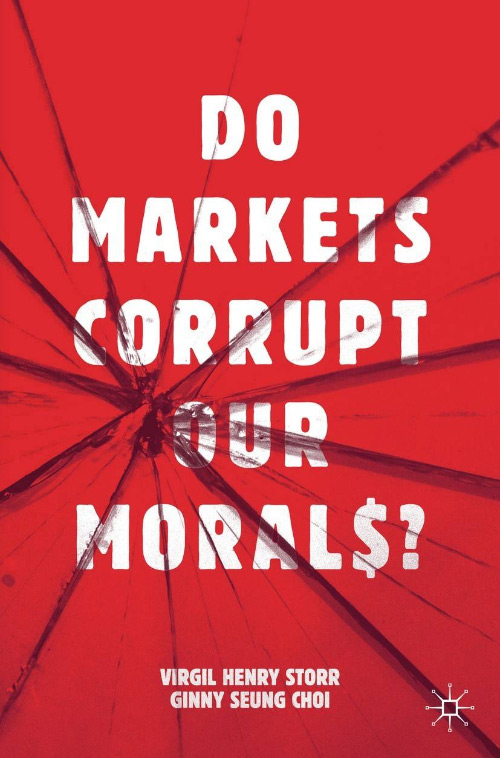 Do Markets Corrupt Our Morals?
Virgil H. Storr and Ginny S. Choi
Kindle Paperback
This book review is a web exclusive for the Spring 2020 issue of The Independent Review.

Do Markets Corrupt Our Morals? is a book-length rebuttal to longstanding assertions that they do. The book starts from criticisms that in participating in market economies, “we risk losing our souls” (p. 3), because they involve an “alarming level of moral risk” (p. 4), or more completely, that “our participation in the market corrupts our morals by engendering antisocial and overly self-interested sentiments, attitudes and behaviors” (p. 32).

Virgil Storr and Ginny Choi discuss some of the conclusions reached by famous critics of markets, including Aristotle, Thomas Aquinas, Jean-Jacques Rousseau and Karl Marx, as well as more recent communitarian critics, particularly Michael Sandel. Then in contrast, they discuss many of the rebuttal arguments that have been offered against such conclusions, including those by Montesquieu, Voltaire, Adam Smith, Thomas Paine, Phillip Wicksteed, Deirdre McCloskey, Milton Friedman, Henry Hazlitt, and Friedrich Hayek. However, the authors find that those arguments are not likely to “satisfy the critics of markets” (p. 51), falling short because they “do not really address the central moral criticism leveled against markets by their critics” (p. 12).

Consequently, because “the claim that markets are morally corrupting is ... a theoretical and empirical claim about what happens to people when they engage in market activity or live in market societies,” the authors turn to those considerations to more directly address market critics’ claims: “If engagement in market life comes at a moral cost, then we should expect those moral costs to be higher in market societies” (p. 43). Consequently “we should also expect qualitative evidence of these negative moral consequences” (p. 9). Further, we can expect “quantitative measures of morality to be lower in market societies than in nonmarket societies. This book will examine both the qualitative and quantitative evidence” (p. 11).

That summarizes the core new contribution Storr and Choi make. They examine in great detail the available evidence allowing comparisons to be drawn between the moral consequences of market and those of nonmarket economies (and there is far more evidence than I was aware of before reading the book). Those who believe markets cause moral erosion as an article of faith will find substantial evidence that will challenge that faith, if not overwhelm it.

However, I found their repetitive use of simple comparative market versus non-market society bar graphs to summarize the results of so many studies unnecessary. That may reflect that I do not need convincing of markets’ morality. However, it may be an effort to visually draw more attention to the many margins at which markets benefit and improve us, for those who believe the opposite without supporting evidence. The book’s extensive bibliographies also offer real value to those seriously pursuing understanding, though one can wonder how many of those it would most benefit will make use of them.

The book’s discussion leads the authors to some very powerful conclusions. Most noteworthy are:

...the claim that markets are morally corrupting is simply wrong. Markets do not work in theory or in practice the way the moral critics ... contend ... the evidence points in the opposite direction. (p. 77)

We find that rather than corrupting our morals, the opposite is true. The evidence suggests that the market actually improves our morals ... people can improve their lives through markets. People in market societies are wealthier, healthier, happier, and better connected than people in nonmarket societies, [which is] morally significant ... the market is a moral space that both depends on its participants being virtuous and also rewards them for being virtuous ... successful markets not only require but also produce principled participants. (pp. 11–12)

Arguably, the market system is the most just economic system. Markets are arenas in which individuals can improve their lives. People residing in market societies are wealthier, healthier, happier, and better connected than people residing in nonmarket societies. Moreover, these advantages do not just accrue to the richest people in these societies ... that we have good reasons to believe that the market is the most just economic system available to us—that market societies maximize the freedom and prospects of all people within them including the poorest—is an important response to the most damning critiques of markets on moral grounds (p. 132).

To say that markets are morally corrupting, then, is to say that engaging in market activity distorts our moral judgments or impedes our moral development. When critics of the morality of markets assert that engaging in markets is morally corrupting, they are implying that markets tend to reward vice and punish virtue, that immoral actors tend to win approbation and moral actors tend to suffer disapprobation, and that immoral attitudes tend to be cultivated within markets. The critics are also implying that markets limit the opportunity for market participants to make and reflect on their moral choices. Markets ... teach the opposite lessons. In fact, markets reward good behavior and good actors. Similarly, markets punish bad behavior and bad actors suffer social disapproval. (p. 205)

I agree with Storr and Choi’s conclusion. However, I do not entirely agree with their assertion of the need to directly rebut the moral failings critics see in markets in a way that those critics would accept. That is because critics rely on multiple errors in drawing their conclusions, and addressing their concerns as they frame them, requires accepting their premises as if they are true. I feel that focusing on improving their understanding, which would change their conclusions, may be more productive.

That is revealed in the discussion of Aristotle, Aquinas, Rousseau and Marx as market critics, which primarily reveals that none of them fully understood markets. With conclusions grounded in false premises, their market criticisms are far from logically compelling.

Someone who believes specialization and trade is zero-sum rather than positive-sum doesn’t see its massive benefits, even though most of history before markets more fully developed was a nip-and-tuck race against starvation. Someone who believes costs determine just prices does not understand the importance of differing subjective values, one of the greatest (along with comparative advantage) sources of market gains. Someone who believes in the labor theory of value misunderstands profits. Someone who doesn’t recognize money’s role in enabling markets’ benefits cannot fully understand interest rates.

Michael Sandel, the most prominently featured communitarian in the book, illustrates market misrepresentation when he describes such societies “where everything is for sale” (p. 4). There has never been such a system. There is no society in which all family and interpersonal relationships fall under such a rubric. He doesn’t see that markets are only created when both buyers and sellers anticipate gains from them. He overlooks that scarcity (economics’ major premise) means that every choice has an opportunity cost, and that rational decision-making requires weighing benefits against costs, in both market and non-market systems.

Market critics also object to “autonomous actors pursuing their own ends and competing against each other” (p. 33). But that ignores that scarcity requires competition and that market competition is in fact the most effective means of achieving social cooperation. They have also failed to think very carefully about the unity required to make their cooperative visions anything but pipedreams.

Most striking is communitarians’ claim that “the market system has unwound the social bonds that knit our communities together ... we were once embedded in community, but we are now all alone because of the expansion of markets ... social bonds give way to rivalry, community fragments into a body of competitors, and loyalty is replaced by self-interest ... Once we were virtuous and cared about each other, but now we are only concerned with private gain and care only about ourselves” (p. 33). This is so weighted with misunderstandings and unsupported assertions that I am not convinced that market defenders must directly address their moral conclusions rather than their logical shortcomings in reaching them.

Given communitarians’ lack of compelling reasoning or evidence for their complaints against market societies, I also take issue with Storr and Choi’s disparagement of the many responses that have been made to market critics because they would be “insufficient defenses” in the eyes of those critics. I believe critics’ claims are weak and more than effectively rebutted by those “insufficient defenses.” In fact, I find the discussion of those arguments (pp. 53-76) perhaps the most powerful part of the book (not less true because critics might be unwilling to recognize it), with the empirical evidence playing more of a valuable backup role.

I also wish the authors had extended their discussion of their statement that “rather than there being moral costs associated with engaging in market activity, there are moral costs that will result from curtailing market activity. The moral critics of markets seem to have it exactly wrong. As such, implementing policies that attempt to respond to their moral concerns about markets might very well lead to the immoral outcomes that they themselves want to avoid” (p. 13). The fact that many alleged “evils” of markets are actually evils of government restrictions on markets, and not markets themselves, needs more widespread recognition.

That said, Do Markets Corrupt Our Morals? deserves reading. It makes clear, as it quotes J. Brennan and P.M. Jaworsky, (Markets Without Limits: Moral Virtues and Commercial Interests, (New York: Routledge, 2016), that “a corruption objection would have to provide evidence, not conjecture, and be devoid of logical leaps or errors. None of the major corruption objections ... passed this test” (p. 77). It also demonstrates Paul Heyne’s conclusion (Are Economists Basically Immoral?Indianapolis: Liberty Fund, 2008, p. 38) that “Ethical thinkers who object to capitalism on the grounds that it is based on or even that it encourages selfishness and materialism only prove ... that they have not paid close attention to the system they claim to be criticizing.” And it provides extensive empirical evidence that critics’ conclusions are in error, for those open to correcting their misunderstanding.