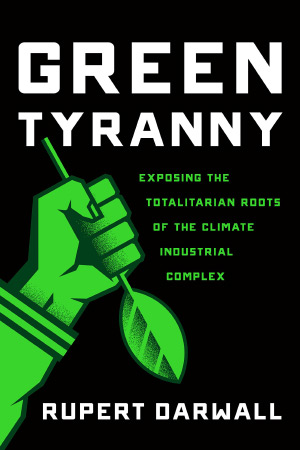 Green Tyranny
Exposing the Totalitarian Roots of the Climate Industrial Complex
By Rupert Darwall
Kindle Hardcover Paperback
This book review is a web exclusive for the Winter 2018/19 issue of The Independent Review.

Rupert Darwall’s provocative argument is that the Climate Wars aren’t really about the climate, rather they’re more akin to a coup in which a group of capitalism-hating elites are attempting to gain power at the expense of everyone else. Why is it, for example, that since 2009 emissions of carbon dioxide have fallen in United States but risen in Germany, despite the fact that Germany has declared war on fossil fuels and dramatically turned toward renewables while the U.S. hasn’t? Darwall concludes that the Greens waging this war are actually bent on destroying capitalism and don’t really care much about the environment. They are authoritarians, whose roots go back to similar attitudes and policies of the profoundly anti-capitalist National Socialists. Although Darwall’s argument seems plausible for some Greens, I understand why readers may be skeptical of this charge, so this review will focus instead on the book’s more conventional argument that the environmental policies of Germany (and other European countries like Sweden and Denmark) have been a disaster and should not be emulated elsewhere. This part of the argument is exceptionally important because well-meaning environmentalists in the United States (some of whom I teach) erroneously hold up this European model as an ideal.

Darwall begins by reviewing the antecedents of alarm about global warming, demonstrating that earlier scares about acid rain and nuclear winter showed similar pathologies. Although few remember it today, acid rain was a major worry in some quarters in the 1980s. Pollution from power plants was said to be killing trees, especially in the Northeast U.S. and northern Europe. The drumbeat intensified despite noticeable increases in forest productivity and eventually concerns about the problem faded away when mounting scientific evidence turned against it. Fears of nuclear winter followed a similar trajectory. The threat was that nuclear war would kick up so much smoke and dust into the atmosphere that the sun would be blocked out, throwing the earth into the deep freeze. There were even noted scientists who warned that oil well fires during the Gulf War would do the same. In both cases, the science behind the predictions was incomplete but some media-savvy scientists fanned the flames of worry, predicting catastrophes that were never going to materialize. Other scientists took issue, for example, pointing out that the rudimentary nuclear winter models were unverifiable projections “masquerading as empirical evidence” (p. 109)—and that the main nuclear winter model (TTAPS, after the initials of its authors) had “no geography, no winds, no seasons, instantaneous spread of smoke to the hemispheric scale, and no feedback of atmospheric circulation changes on the rate of smoke washout by rainfall” among other shortcomings (p. 112). Darwall reports that, years later, a defecting Russian intelligence agent reported that the KGB was most proud of the success of one of its disinformation campaigns: “It created the myth of nuclear winter” (p. 114).

Rather than learning that it is important to disinterestedly weigh all the evidence when dealing with climate issues instead of relying on overly simplified theoretical models, many people forgot these episodes and listened attentively when warm-mongers began to warn of the catastrophic impacts of rising levels of greenhouse gasses in the atmosphere. And “warm-mongers” seems to be the apt phrase because there soon arose a climate-industry complex of academics, government officials, NGOs, and for-profit businesses with a growing financial stake in convincing others that this was a problem in need of massive resources. Unlike acid rain panic, warm-mongering isn’t about to fade away. It has an advantage over other environmental scares: “environmental scares relying on the present tense run the risk of present-tense falsification. Scientists claimed trees were being damaged and forests would die. The evidence showed that they weren’t. By contrast, evidence of damage caused by predicted catastrophic global warming is, by its very nature, speculative ... Global warming’s predictive elasticity and its avoidance of an empirical falsifiability test give it more staying power than acid rain” (p. 81).

The German reaction to the climate change campaign is particularly instructive and forms the heart of Green Tyranny. Jürgen Trittin, Germany’s environmental minister from 1998 to 2005 led the push toward renewable energy, arguing that “supporting renewable energy costs the average household about only one euro a month—the cost of a scoop of ice cream” (p. 143). But after a decade, the bill for renewables was running just a bit higher than originally advertised. Peter Altmaier, one of Trittin’s successors, estimated that “the costs of our energy reform and restructuring of energy provision could amount to around one trillion euros by the end of the 2030s” (p. 143).

By 2013 Germany had moved significantly toward renewables. Numbers from its Federal Ministry for Economic Affairs and Energy are telling: 19% of its electrical generating capacity was in solar photovoltaics and 18% was in wind. However, solar actually generated just 5% of Germany’s electricity output and wind only 8%. The obvious problem with these renewables is their intermittency—solar simply doesn’t generate electricity at night or on cloudy days and wind power is useless on calm days. This means that renewables don’t actually replace non-renewable generating capacity, so Germany relies extensively on burning lignite—a soft brownish coal that is between bituminous coal and peat. Carbon-emitting lignite generates 25% of Germany’s electricity. As Germany implemented its renewables plan, share prices of its utilities lost over half their value, with shareholders losing nearly 70 billion euros. Electricity rates soared, with households paying nearly fifty percent more for electricity in 2015 than in 2006—paying the second highest electricity prices in Europe (second only to Denmark), prices that are almost three times higher than in the United States. (A figure in Green Tyranny shows that electricity in Germany in 2012 averaged 27 cents per kilowatt hour, while the average price in the U.S. was a bit below 10 cents per kwh in the same year.) The costs of distributing electricity climbed substantially because German wind farms are far away from population centers. Most remarkably, on sunny, windy days Germany must pay neighboring countries to take its extra energy and switches on street-lights and stadium lights in the middle of the day, so that the system doesn’t explode. High energy prices have begun to harm German industry, so firms are given rate reductions at the expense of households. Darwall aptly summarizes a “veritable catalogue of policy errors” (p. 153). (Remember that Darwall argues that this “debacle” was the intended consequence of Greens, who despise Germany’s capitalist economy.)

And yet, well-meaning environmentalists in the United States (such as the ones I teach) lament how the U.S. has fallen behind Germany with our retrograde energy policies. Fittingly, Darwall next turns to the U.S., arguing that—as in Germany—many leaders in this movement are not well meaning. He recounts the lethal side effects that renewable fuels can have on wildlife. “Wind farms kill bats when pressure waves from rotating blades cause their lungs to explode” (p. 189), which he estimates to kill up to three million bats per year. Other sources suggest that this is an exaggeration (e.g. Rebecca Boyle, “Wind Turbines Kill More Than 600,000 Bats a Year,” Popular Science, November 19, 2013). Darwall points to the Ivanpah solar project in the Mojave Desert, which uses 300,000 mirrors over a 3500-acre site and incinerates “an average of one [bird] every two minutes” (p. 209). Again, other sources suggest much lower totals (e.g. Phil Taylor, “Sharp Rise in Estimated Bird Deaths at Calif. ‘Power Tower,’” Greenwire, July 29, 2016, which reports that Western EcoSystems Technology Inc., a contractor for the plant, estimates 6,190 bird deaths for the year). The correct magnitude will be especially important to well-meaning environmentalists in their attempts to weigh costs and benefits. While both sides have incentives to play with the numbers, it is especially important for those in Darwall’s camp to be as accurate and fair as possible so that their broader arguments are not discredited by mistakes and exaggerations.

Google invested $178 million in the Ivanpah project. Why would they do so? Darwall argues that the purpose of much of corporate America’s embrace of environmentalism is to provide cover for their un-green behaviors and to allow the wealthy (especially those in the tech sector) to lead lives of material excess without guilt because they have contributed to the right causes. They can live it up, feel virtuously green, lecture others on their failings, and avoid being green-shamed—even when their donations and the policies they espouse don’t help or actually make things worse. Darwall stresses that the point of Greens—especially those at the top—is NOT to fix environmental problems but to make them permanent so that the green lobby will be able to raise ever-rising contributions from do-gooders and/or earn massive subsidizes and profits from taxpayer largesse. Their ultimate goal, he warns, is to utterly subvert democracy by proposing top-down “solutions” to exaggerated problems, replacing the electorate’s will and interests with their own.